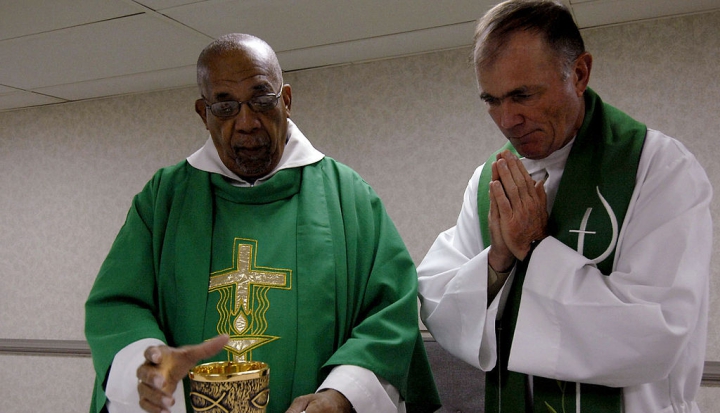 Ordinary Time, or the season in the liturgical calendar outside of Advent, Lent, and the Christmas and Easter seasons, is a time when the church focuses on the life and ministry of Jesus. The season celebrates the mysteries of Christ’s life and death and looks forward to the salvation and eternal life that he brings. Green represents hope—like the hope we feel when we see the first buds in springtime—and it is thus fitting that green is the liturgical color that marks this season.

Or, at least, that’s the rationale the modern church gives for the rule about wearing green during Ordinary Time. In reality, however, the reason might have been much more practical. Ordinary Time is the longest liturgical season, and green plant dyes would have been one of the most widely available kinds of dyes. The color brings to mind the tender, new shoots of spring and the lush grasses and summer crops that sustained animals and people throughout the year. This leads naturally to seeing green as a sign of hope and life.

In the earliest church, most priests probably wore white. The original vesture for Mass in the West was simply the formal attire of Roman gentlemen, which was white. As time went on and Christianity spread, the vestments worn by priests gradually grew more elaborate. The liturgical year developed, and colors came to be associated with different feasts and seasons. These colors varied, however, based on culture, the availability of colored dyes, and local traditions.

It wasn’t until the early 13th century that Pope Innocent III established four official liturgical colors: green, white, red, and black. Rose and violet (purple) were added in the 16th century, after the Council of Trent. These decrees affirmed colors that were already in use, and probably excluded others that regional churches or dioceses had been using. After the Second Vatican Council, these same colors were kept.  A few countries have additional approved colors due to their own ancient traditions. (Eastern Catholic and Orthodox Churches, for example, are two churches that have their own traditions and colors.)

In today’s church, white is worn for times of great joy, including Christmas and Easter. It is also worn for weddings, baptisms, and other special days of celebration. Red denotes the Passion of Christ, the blood of martyrs, and the fire of the Holy Spirit, and is worn during celebrations such as Pentecost or the commemoration of Christ’s death on Good Friday. Violet, the color of penance and preparation, is worn during Advent and Lent.

Like much of our liturgy, the use of green to signify Ordinary Time started as tradition but has now become a rule. Today, the colors of vestments and church decorations reminds us of the passing of the liturgical year and invites us into the mystery of our faith.