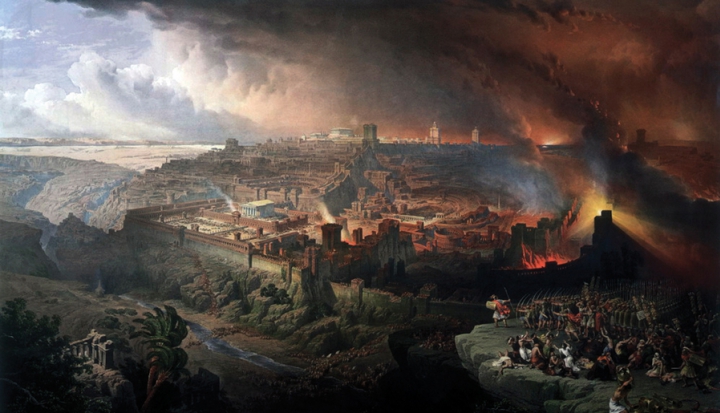 What do you do when the sky is falling? This is not just a problem for Chicken Little to solve in the familiar children’s story. It’s a life question all of us have to answer sooner or later. As is the case with most fables and nursery rhymes, the famous fowl must address a certain grim reality nested in the experience of a world at risk. The tale’s central trouble—that our personal security can be threatened by a sudden collapse of the certain—is so mythically significant that some version or another of the Chicken Little or Henny Penny saga exists in many cultures and has for about 2,500 years.

We don’t have to reach as far as the death of our sun or a military Armageddon to contemplate what a falling sky feels like. We see its impact in a dissolving marriage, as parents and children frantically seek cover any way they can to avoid extinction. We show up for work one day to discover our entire industry obsolete and our livelihood in sudden freefall. An unwelcome diagnosis during a routine medical examination can turn the world upside down. The unexpected death of someone we love seems to bludgeon time to a standstill. The sun may as well go dark. Tomorrow seems an unlikely proposition, and the idea of living through such revelations does not seem possible.

“Lo, the day is coming”—to use Malachi’s cautionary phrase—when each of us will spend a season or more under a crumbling sky. I can’t tell you how old I was when the sky first crashed down on my head, but it was certainly before puberty. Even to describe the experience takes me out of time as I recall the mad heartbeat of realization that safety is an illusion. Things can change in the blink of an eye, people aren’t always who you think they are, and happiness is the most fragile human state of all. The sky fell, and childhood fell with it.

Since then, of course, the sky has fallen on me more than once, but each time its crumbling pieces shatter against my consciousness, I feel it like a brand new apocalypse. We’ve all had our reckonings with vulnerability, none of them easy. A trusted friend turns out to be a drug addict. A lover is revealed to be a liar. A healthy sibling who goes to the gym faithfully dies in midlife of a senseless disease. A confidence is betrayed, and the results are devastating.

Each of us copes with the Chicken Little experience in different ways. Take the people of Thessalonica in the time of St. Paul, for example. First-generation Christians fervently believed the risen Lord would return shortly to inaugurate the dissolution of all things at the end of time. They had to learn to make peace with that constant possibility as a matter of routine. Of course, Christians today also recognize the precept of a second coming, but most of us are persuaded it won’t be today, or any day we need to worry about. But the folks to whom Paul preached did accept the imminent end of business as usual, and that affected how their daily lives looked to them.

Imagine yourself a Thessalonian Christian for a moment. The end of the world could happen today, could happen shortly, and time is literally running out. How do you feel about doing laundry or grocery shopping, teaching your kids long division, or watching the remaining episodes of this season of House of Cards? To say the least, such beliefs might influence your priorities for the rest of this afternoon. Considering how something as pedestrian as final exams or work deadlines rearrange our perception of what’s important to do right now, we certainly appreciate that Paul’s community in Thessalonica might have viewed reality differently after embracing the Christological conviction that the return of Jesus was truly pending.

But some of the Christians in question reacted to the urgency in a way that may sound surprising. Rather than doubling down on spreading the gospel or cleaning up their acts or even getting their affairs in order, some folks inhabiting the bell jar of apocalypse chose to do nothing at all. Why bother, honestly? What point is there in doing anything if everything is about to dissolve? Each of us probably knows a few modern Thessalonians who weather the crises of their lives in a similar way. If they lose a job, rather than pound the pavements for a new situation, they determine to throw a party that lasts until the final keg is dry. A significant relationship explodes as a result of unaddressed issues; instead of heading to a counselor, the space between the couch and the television set becomes a refuge against self-examination. The doctor warns of serious health repercussions if dietary changes aren’t effected immediately. The patient goes straight to Kentucky Fried Chicken for consolation.

The Thessalonian strategy is less Chicken Little and more ostrich-like in its method. But it’s a well-known tactic: dealing with change by ducking it. If this is not the biblically recommended approach to personal or world crisis, is there a preferred way for us to deal with sky-fall? Can there be such a thing as a healthy response to the total collapse of everything we count on to be stable? I think most of us find such a way in our maturity—whether that wisdom season arrives at 10 or 40 or 70. If we don’t work on maturing, of course, we’ll continue to experience each new sky-fall as the 6-year-olds we once were.

Jesus spells out to his followers a fearful list of things that can go wrong with the world: wars and insurrections, deceptions and devastations both natural and caused. Beyond the earthquakes and persecutions on the list, the destruction of the Temple was perhaps the most shocking prediction Jesus could have made. It was such a magnificent structure that the disciples couldn’t stop marveling at it from the time they arrived in Jerusalem. The Temple symbolized God’s sturdy presence and deep alliance with the nation. Even Roman occupation was a mere shrug of history so long as the Temple remained standing.

But what if that immense, imposing edifice could actually be thrown down? Then all bets were off, and the future shivered into quicksand and disappeared.

What’s more staggering perhaps is that Jesus insists none of this matters much. The disciples, with the spiritual maturity of 6-year-olds, are standing with their mouths open, not yet caught up to the idea that the Temple could physically be dismantled. Since change is inevitable, and devastating events part of the long, sad song of human history, preventing the sky from falling is not really an option. What we can do, what we must do, Jesus says, is give our testimony to what we believe when the fateful hour arrives.

When global conflict rears, when sickness cripples, when relationships veer off course, when money evaporates—these are the times when the underpinnings of our faith are revealed. The most important creed we’ll ever profess is the one we demonstrate when the sky seems to be falling in pieces all around us.

Is God still our God when the Temple of our personal religious pact is blown to smither-eens? Let’s pray for each other when that time comes.