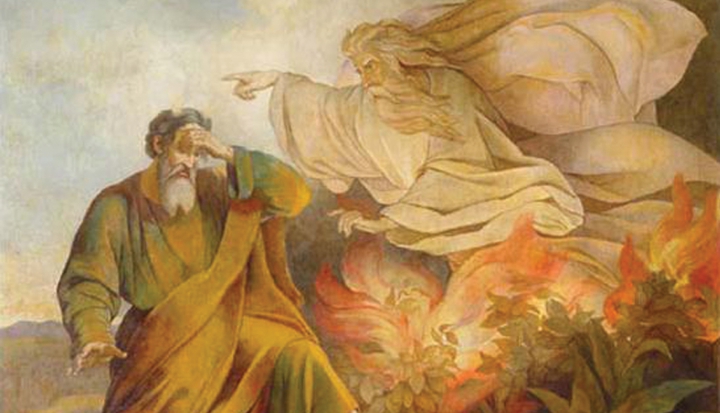 It can be a wee bit confusing, after a year dedicated to celebrating divine mercy, to spend any appreciable time with the God of Moses. It seems as if for those 40 years the Israelites spent in the wilderness, God threatens every five minutes to visit supernatural plagues and military catastrophes on various enemies—as well as snakes, fire, thunderbolts, leprosy, and earthquakes on God’s friends. At the end of the epic journey, God’s best pal Moses gets denied access to the land of promise. Where’s this mercy we’ve been talking about?

We have to begin the quest for understanding by acknowledging certain biblical basics. While everything in the Bible is true, not all of it actually happened. There’s a difference between literary truth and historical fact. In history, things happen once and are therefore “true in the past.” In storytelling, a thing may never have factually occurred in the past, but it’s still “true about human beings or true for all time.” One could argue that literary truth is a higher form of truth, since it’s universally and eternally true. Whereas a historical fact is momentarily true and then gone.

I’m not saying Moses didn’t exist, although there’s no historical evidence that he did. That we can’t produce his bones, a lock of his hair, or his dental records underscores what we just laid down as the ground rule about historical facts: They can be hard to hold on to, particularly across millennia. So vanishes the whole record of Hebrew slaves making the great escape from Egypt, following their cosmically connected leader across a generation to reach a brave new world. Gone are any Egyptian reports of such a fall-off in their indentured labor corps. Gone is the Ark of the Covenant, which companioned the escapees. Gone are the stone tablets of commandments. Gone are the magical rod of Moses and Aaron’s priestly ephod. If all of these things once were, they are no more.

While scholars can debate these matters with more precision, I’m willing to recklessly go on record and say I’m quite sure Moses did exist. And that he did pretty much what Exodus through Deuteronomy says he did. I’d wager it for the simple reason that a story this sweeping, central, and enduring must be based on something or it wouldn’t have survived. History has little use for trifles. If it doesn’t last, it wasn’t essential. Moses was necessary and by no means a trifle. The Moses of history may have been more like Ben Kingsley than Charlton Heston—two actors who played him in memorably distinct portrayals—or vice versa. There’s simply no way to know.

But the larger reality is that the Moses of history matters less than the character Moses who lives on in the stories of the Pentateuch. That Moses, the dynamic prophet of the Israelites, is the Moses you and I have to reckon with. When we say scripture is inspired, we mean its writers were inspired to present us with this portrait of a religious leader with whom we must contend and commune.

What implications can we draw, then, about the God of Moses? I’d vouch for the same. The God of Moses is just that: a study in how Moses related to God. We may presume the historical Moses wrestled with his deity every bit as sweatily as his ancestor Jacob contested with his heavenly visitor. It’s this story that’s handed down for our instruction, anyway. Israel, we might say, is the community of God that views conflict with God as something to be grappled with. The story we have suggests that it’s normal for human beings to be pushed by God and to push back.

Does this mean God is actually doing the pushing? You tell me. I think many of us have shouting matches with God from time to time. It’s not always a silky smooth relationship where we and God see eye to eye and get along famously. Sometimes we’re great friends. At other times we spar. We hurl questions into the breech, and only occasionally are there answers. We may stand on a spiritual Mount Sinai and receive what sound like clear marching orders on how to proceed with the next decision. At other times, we find ourselves on Mount Nebo, gazing longingly toward a promise that’s been denied us for reasons we don’t fully understand or think are fair.

This characterization of Moses and his lifelong contest with God is true especially because it’s familiar to those of us who dare to enter the arena of faith. So it doesn’t shake my confidence in divine mercy to hear the God of Moses say to him, “I have seen this people, how stiff-necked they are. Now let me alone, so that my wrath may burn hot against them and I may consume them!” (Exod. 32:9–10). It seems quite reasonable that Moses, who has to deal with these tiresome whiners year in and year out, has precisely this sort of conversation with God. A conversation in which God mirrors back to Moses the shortness of his own temper and the smallness of his own heart.

“You’re absolutely right,” God is saying. “Let’s kill them all and start over. They’re just not worth the trouble for you or for me.” The statement so horrifies Moses that he’s thrown against the walls of his little heart and forced to reexamine what he really wants: “God! You’re bigger than this! Don’t kill them! We’ve come all this way and it makes us look absurd if we drag a nation into the desert just to snuff them.”

Have you never had such a conversation with God, or perhaps another friend? In which you declare, “That’s it, I quit, I can’t do this anymore.” And to which your friend replies, “Perhaps you should quit, it’s not worth it, the cost is too high.” For a moment, you consider the dear cost of continuing, but also the astronomical waste of surrendering. And you say to the friend, “Are you crazy? Give up now? After all this? What kind of friend are you? Support me in doing the right thing!”

We find in the character of Moses every noble heroic impulse and every petty weakness we find in ourselves on our best and worst days. Moses goes up against the Pharaoh of Egypt and struts away a hero. But he also murders an Egyptian in cold blood and runs away in the dark. Moses speaks boldly for God for a generation. But first he tells God he’s not much of a talker, requiring God to appoint his brother Aaron to do the speechmaking. These are wonderfully real contradictions. We humans are rarely consistent.

So it’s no wonder that on some occasions Moses talks God into shining a benevolent countenance on the Israelites. And on others, Moses is less successful an arbiter, and the nation gets a sound whack on the head. Is it God who is varyingly merciful? The relationship between Moses and his God is presented as a partnership. And that may be the most thought-provoking lesson of all from this cycle of stories: We are all collaborators with God and expected to be so. Our contribution may amount to being a conduit of mercy or wrath, rescue or inaction, passionate concern or utter indifference. The God of Moses tells us a lot more about Moses than it does, perhaps, of the creator of all things. What does the God of you, and the God of me, have to reveal?