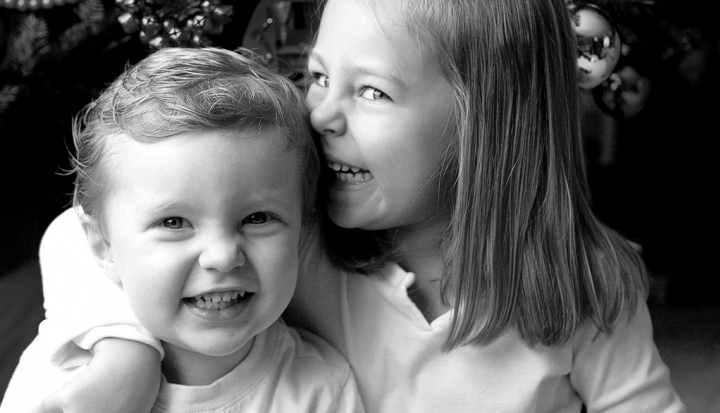 Siblings are on my mind as I prepare to celebrate the feast day of St. Martha on July 29—one of my favorites! St. Martha is among the New Testament’s most famous siblings. She squabbled with her sister, mourned her brother, and with them offered Christ friendship and the “many details of hospitality” for which she is so well known. (I suspect, unscientifically, that she may have been a middle child.) We know little more about this trio except that they were sisters and brother to each other and beloved friends of Christ.

Martha, Mary, and Lazarus may be the most famous biblical siblings, but they’re not the only scriptural examples of brother and sister relationships. Christ selects several pairs of brothers to join his group of disciples—including James and his brother, John, and Simon Peter and his brother, Andrew. Perhaps Christ knew the challenging life of discipleship could be better lived with a brother close at hand.

Of course, as in life today, biblical tales of sibling life are not all rosy. Cain and Abel’s fratricidal conflict echoes through the centuries. Jacob’s son Joseph could have had no more disloyal companions than his band of brothers. Like many siblings today, Esau and Jacob struggle over an inheritance, while the prodigal son’s diligent brother, feeling the ancient sting of sibling rivalry, fought his brother for attention.

In his discourses on family life, Pope Francis devoted an entire audience to the relationships among siblings. “Brother and sister are words that Christianity really loves,” he said—and this is true. How many times in liturgical celebrations, in sacred songs, and in religious discourse do we describe bonds of love and affection through the words of sibling relationships?

Pope Francis mourned the ways in which, “when the relationship between siblings is destroyed, the road is open to painful experiences of conflict, of betrayal, of hate.” Yet, he also pointed to the beauty of sibling relationships happily lived, observing that “among siblings, human coexistence is learned, how one must live in society.”

It should be no surprise that when Pope Francis speaks of the bond among the people of God, he speaks of it as the relationship among siblings. “Having a brother, a sister, who loves you is a deep, precious, irreplaceable experience. Christian fraternity happens in the same way,” he says. This is no mere analogy, but a prayer and a hope that as children who share the same Father, we see each other as sister and brother.

Perhaps it is precisely through our sisters and brothers that unexpected holiness can be found. It was the death of Martha’s beloved brother, Lazarus, that prompted her and her sister to call for Christ’s assistance. Maybe in the sorrows of our sisters and brothers, we seek God in ways we otherwise would not. It was in response to Martha’s mourning that Christ said, “I am the resurrection and the life. Those who believe in me, even though they die, will live, and everyone who lives and believes in me will never die” (John 11:25–26). Christ brought comfort and healing to many during his time on earth. But he chose to share that profound truth in the particular grief of a sister mourning her brother.

If grief over our siblings brings us closer to God, perhaps hoping for their joy also gives us a clearer picture of Christ. Love for her brother led Martha to turn to Christ in hope, to be able to say, “Yes, Lord, I believe that you are the Messiah, the Son of God, the one coming into the world” (John 11:27).

The relationship among brothers and sisters is unique. Unlike other relationships, there are few, if any, legal rights or responsibilities that run between siblings, unlike the relationships between parents and children or between spouses. Sibling relationships are not freely chosen, unlike romances and friendships. They often involve those who live vastly different lives in distant places. Yet, for many, our relationships with our sisters and brothers are the longest ones of our lives.