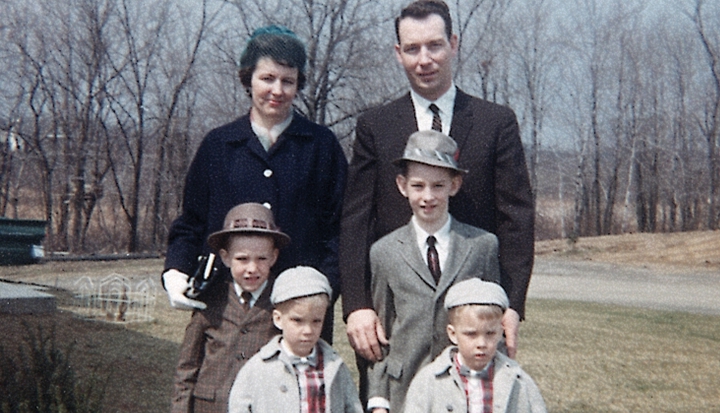 It all started when my brothers and I were planning what Dad called a “shindig” for our mother’s 80th birthday. Looking through some old family photos, we hit pay dirt with one taken on Easter Sunday, 1960-something. There it was: Mom in a low-profile pillbox hat with the veil pulled up. My brothers and I sporting fedoras and berets. Dad looking like Don Draper in Mad Men, his hair slicked back with Vitalis. It was an image right out of central casting: the midcentury-modern, suburban Catholic family living the American Dream.

We thought the hats alone were a hoot. And Mom had coordinated them with such terribly snazzy outfits that it all seemed to give validation to our erstwhile nickname, “The Fabulous Baker Boys.” We blew up the picture poster size for the party, put on new brimmed felt hats, and busted our own mother for dressing us up like that for a holiday photo-op.

She brushed it off: “That’s the way it was back then. Everybody wore hats.”

I discovered that was especially true for Catholic women. Further inspection of shoe boxes packed with family photos provided plenty of evidence of female relatives with their heads covered at church events. At weddings, baptisms, and confirmations, they all wore hats, veils, or something called kerchiefs—basically big square handkerchiefs that went over the head and tied under the chin. (I had to ask.)

Not surprisingly, I never found any photos of women at confession. But one image is etched in my mind: Mom stopping at St. Peter’s one Saturday afternoon. She put a white Kleenex on her head—a tip she picked up from the Franciscan Sisters of the Atonement as a way to beat the system when traveling hatless. Even back then, I thought it was bizarre.

“Not many women in our church wore hats. I’d wear one on holidays, but I couldn’t stand having the veil down over my eyes,” Mom admits. “Kerchiefs were popular, though, and you wore them everywhere, not just to church. Especially when it was raining, windy, or on bad hair days. But if I’d been out shopping, wanted to go to confession, and didn’t have anything else, a Kleenex would always do the trick.”

Hats off to bare heads

Now I have to confess: For most of my life, the only acceptable hat has been a baseball cap. Even though I now love the music of Frank Sinatra and Bing Crosby, when I was growing up they were has-beens, and the fact that they wore fedoras killed them for my generation. Showing off good hair and lots of it was the new cool. I give you Exhibit A: The Beatles. And Exhibit B: The Mamas and the Papas, who advised, “If you’re going to San Francisco, be sure to wear some flowers in your hair.” They never said anything about a hat.

Still, the demise of the hat as everyday apparel in the mid-’60s seemed to mean nothing to the Catholic Church. While the nuns never said it was a sin to go sans chapeau, my mother got the impression there was no wriggle room on the matter. She never questioned it, especially since she could get around it so easily with a crumpled tissue. She was just following the rules she’d been taught: In church, women had to cover their heads and men couldn’t. Simple as that.

Years later, this phenomenon caught the attention of the late comedian and recovering Catholic George Carlin. In an old HBO special called It’s Bad for Ya, I recently watched him go on a merciless rant about what he calls a “religious fascination with headgear.” If you’ve ever heard Carlin, you know that his tirades—particularly those about religion and politics—can be brutally insightful.

Part of his spiel recalls his being taught as a Catholic boy that men had to remove their hats in church to “honor the presence of God.” This made no sense at all to Carlin, who recalls: “They’d already told me that God was everywhere. So I used to wonder, ‘Well, if God was everywhere, why would you even own a hat? Why not show your respect, don’t even buy a hat!’ ” But wait! “Just to confuse things further, they told the women exactly the opposite! Catholic women and girls had to cover their heads when they went into church,” Carlin finishes.

So it turned out that Carlin’s act was strikingly reminiscent of my mother’s stories—although significantly more irreverent and outrageous. It tackled the same issue that captured our imagination in that old family photo. But it didn’t explain why the church would make a rule like this in the first place. I figured this was not exactly one of the great mysteries of faith, so I put on my thinking cap and started Googling.

I was surprised to find out that the church didn’t issue an edict on head-covering until the 20th century. It wasn’t until 1917 that the very first Code of Canon Law introduced requirements—in the Latin Rite only. Canon 1262 stated that women must wear “chapel veils” or other head coverings. It also prohibited men from wearing hats in church. The rule to be followed during all sacred rites was unambiguous: Women, hats. Men, no hats.

When the code was revised in 1983, the mandate was not reissued. And when Pope John Paul II promulgated the new code, it superseded what was written in 1917. Anything that was in the 1917 law that was not mentioned in the 1983 update—and that includes headwear or lack thereof—was officially “abrogated,” or repealed.

Whether it was due to custom, a fascination with Victorian mores, or thinly veiled patriarchy, the fact remains: After centuries of ignoring the matter, the church decided to codify regulations on head coverings in 1917 and to say nothing about them when it changed its own rules in 1983. For 66 years, milliners had a good run.

Of course, after the women’s liberation movement, most women stopped wearing hats to church anyway. The whole idea of covering the head was a sign that had lost its meaning and even taken on a negative connotation in mainstream society. Besides, in 1976, in a document titled Inter Insigniores, the Sacred Congregation for the Doctrine of the Faith had already linked wearing chapel veils with customs that were “scarcely more than disciplinary practices of minor importance” and obligations that “no longer have a normative value.” The 1983 code change just put the nail in the coffin.

So, with the hat rule having gone the way of meatless Fridays, it looks like things also went the way that Carlin would have liked. “Personally,” he said, “I would never want to be a member of any group where you either have to wear a hat or can’t wear a hat. I think all religions should have one rule and one rule only: Hats optional!”

Today, traditional Catholic blogs often advocate for not only a return to the Latin Mass, but pre-Vatican II accoutrements like vintage attire for priests and nuns. Is a push for veils in the pews the next big thing?

I wouldn’t bet on it.

But styles, like history, do tend to repeat themselves. I look at the fedoras in that family photo from over 50 years ago and I think “dopey.” But fast forward to 2016 and I spot contestants on The Voice—and a few kids in my neighborhood—wearing hats just like them. And now it’s just “dope.”

Image: The Baker family in upstate New York circa 1964, wearing vintage Mad Men attire for Easter Sunday Mass. The author is the tall kid at the right.