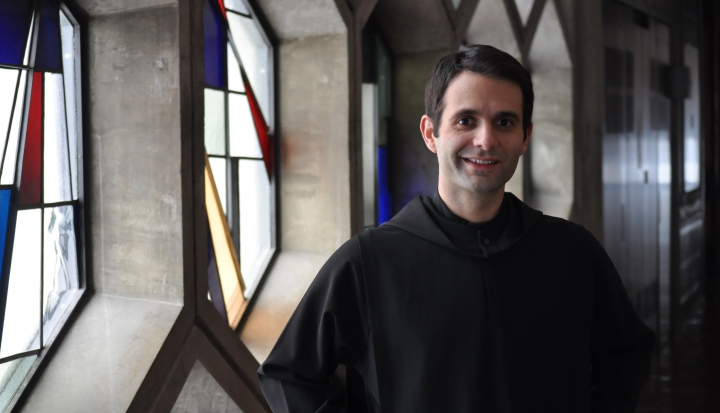 Shuffling out of the choir stalls, Kleespie makes a dash for the door. He sprints across campus, already shedding his flowing black habit in favor of more flame-retardant garb. Adrenaline is pumping for the priest-turned-firefighter.

“There’s something very unique about it,” Kleespie says of his dual roles.

Kleespie is one of 125 Benedictine monks of Saint John’s Abbey in Collegeville, Minnesota. Life is busy in the monastery, with monks working all over Saint John’s University and the surrounding community. A few, like Kleespie, serve on the small-town fire department.

“Firefighting for me is twofold,” explains Kleespie, whose main job is to drive the 102-foot fire engine. “I’m drawn to the physical activity of firefighting, the adrenaline that comes with knowing we could be going to a real medical emergency or fire. But I also get excited because I know in a minute I’m about to see some of the coolest kids on campus and hear how they’re doing and support them in their college careers.”

Kleespie, who also serves as campus chaplain, relishes the chance to minister with the student fire squad. “Every college student has the valleys and peaks of college life. It’s awe-inspiring to get a phone call saying, ‘Hey, I’m having a really bad day. Can we talk for a bit?’ ” he says. “It only exists because we’ve built trust through the fire department.”

How does a young guy become a fire monk—or a monk, for that matter? Kleespie wasn’t sure where his life was headed after graduating from Saint John’s University in 2006. A mentor suggested he try out some post-grad service work with the Benedictine Volunteer Corps.

“When someone you trust suggests a good, faith-filled adventure that fits your skill set, you should listen,” he smiles.

Kleespie did and soon found himself halfway across the world, working as a teacher and pharmacist with a Benedictine community in Tanzania. It was in a small African village that he considered monastic life for the first time.

“To a tee, pretty much every one of their young monks was filled with joy and loved doing what they were doing. Soon I could start to see myself in them,” says Kleespie.

It took some more prodding upon his return to the States. Collegeville kept calling. Slowly and prayerfully, Kleespie answered. He first professed vows in 2010 and was ordained a priest in 2015.

“It was never a flash of light or a sudden calling,” Kleespie says. “I think we all have many paths we’d be very good at and could feel very called to. I paid attention to where I felt God was nudging me, and I wound up in the monastery.”

Kleespie and his brother Benedictines profess vows of stability, conversion, and obedience. The community takes seriously their motto, ora et labora (prayer and work). They gather for communal prayer at least four times a day and engage in physical work. Kleespie says there’s a strong connection between outdoor manual labor and his monastic life.

“When I’m doing manual labor or working with the earth, I’m touching creation and connecting with God,” Kleespie says.

It’s easy to be outside in Collegeville. Saint John’s Abbey is nestled on 3,000 of the most beautiful acres in Minnesota. God lives in the gentle stillness of the lakes and forests. The Holy Spirit sings through the loons and the wind blowing through the prairies.

Over the years, Kleespie picked up outdoor hobbies like beekeeping. Bringing in honey for the community is a “sweet” gig—and parallels Benedictine life.

“Our church has honeycomb windows as a symbol of community, one of the strongest geometrical shapes,” he says. “In a way, bees reflect monastic life. Each bee has a role in the hive to support each other and the common good.”

Together, Kleespie and a brother monk harvested over 2,000 pounds of potatoes for the community to eat during the winter months. His outdoor work benefits the community—and is often reflected in his priestly ministries. At an outdoor student Mass last fall, Kleespie gave a homily about the awesomeness of God’s creation while lying flat on his back, stargazing.

Whether he’s fighting fires or tending the garden, Kleespie senses the sacredness of working—and praying—in Collegeville.

“We’re connected to the earth and the planting and growing and dying and doing it all over again,” he says. “There’s something powerfully mindful about our Christian life and vocation to work and prayer.”