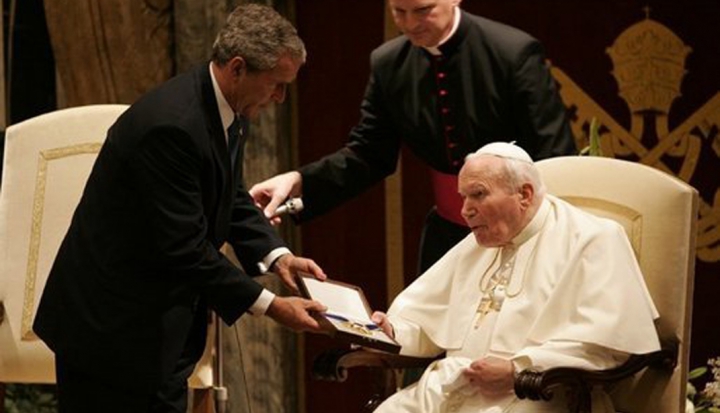 Loosely orbiting the journal First Things, since the late 1980s a handful of Catholic intellectuals have systematically promoted what they believed to be an inherent compatibility—if indeed not actual fusion—between American-style neoconservatism and Catholicism. Sometimes called theocons, the first generation of the movement included Father Richard Neuhaus, George Weigel, and Michael Novak, who sided with the Reagan administration to oppose the US bishops’ 1986 letter on the economy.

Marrying Catholicism to trickle-down economics might have been an initial inspiration for the movement, but in time the theocons came to insist that the entirety of the American neoconservative agenda—from its stances on social issues and militant Pax Americana to its climate change denial and defense of torture—was congruent with Catholicism. This was no easy task; much wiggling was required. So over the years, church teachings, Thomas Aquinas, and interpretations of natural law were bent toward American-style conservatism. Cherry-picked American political history, Chicago School economic theories, and conservative Constitutional interpretations were bent toward Catholicism.

For decades the wiggling seemed to work. Several important American prelates became regular visitors in theocon circles.  A second generation of leadership for the movement developed, including Catholic professors at prominent universities and well-known journalists. What has now become evident, however, is how much of the movement’s ecclesial allowance traded on claimed links to the papacy of Saint Pope John Paul II. Today, with Pope Francis as the Bishop of Rome, that allowance is more constrained. Theocons are using words like “crisis” pretty often.

Let’s be crystal clear about one thing, though: John Paul II was no theocon—despite efforts by the movement to claim him. Any fair reading of his encyclicals will find important differences between his teachings and the political agenda of American neoconservatives—not a cozy fit between the two. John Paul II argued repeatedly for protecting the environment, prioritizing the needs of the poor, promoting unions, regulating the economy for morality and the common good, waging peace, welcoming immigrants, and so on. Indeed, it was John Paul II who first called for a New Evangelization based on divine mercy that has been the hallmark of Pope Francis’ papacy.

The supposed congruence between neoconservatism and Catholicism was never really sustainable, despite the mighty theoretical contraptions that theocons cobbled together to buttress it.

Ross Douthat and a crisis of conservative Catholicism

Ross Douthat, a gifted columnist for The New York Times, has on occasion been something of an apologist for the theocons. Not a card-carrying member of the circle, he’s still a regular at their events and is published and cited in their writings.  His Erasmus lecture, “A Crisis of Conservative Catholicism,” given in October but published just this week at First Things, conveys a sense of the confusion that theocons are experiencing under Pope Francis.

The lecture is troubling because of the distortions that come from looking at our faith through the lenses of political ideology.  Douthat divides Catholicism into two American-style competing parties: one party being a “liberalized, acommodationist Catholicism” and the other a “conservative, but modern, rooted in tradition but not traditionalist” Catholicism.

You can guess where he goes with this. The implicit worldview is of an existential struggle where conservatism’s children of light crusade against liberalism’s children of darkness for the soul of the church. More to the point, it’s red states against blue states, Fox News against MSNBC, GOP against Democrats, only now the crusade is in the pews, even with red popes and blue popes.

OK, everyone knows that I’m a Democrat.  As such, I’ve helped found Catholic-oriented political groups. I’ve worked to advance policies that I believe are in keeping with my faith and to elect candidates whom I believe to be supportive of such policies. Using American popular labeling, most of the policies that I promote would be called liberal—although I am strongly pro-life in the fullest sense of that term. I believe that it is entirely appropriate (and, I would argue, morally necessary) to bring the light of faith to illuminate politics. It is wrong to reverse this, as Douthat seems to do. Bringing the vitriolic nastiness that marks the divisions of American politics inside our church doors is a big, big mistake. The teachings of our church are not conservative and not liberal. Our popes are not red or blue. Our faith is not to be confused with an ideology, political or otherwise.

This was the deep error of the theocon project all along. When faith is harnessed to a political ideology, it withers. Moreover, in a banal way it then becomes subject to the travails of that ideology, dependent upon successes and failures in governance and public opinion. And something truly terrifying can occur too; believers can confuse the ideology with faith itself. For some, as I have seen sometimes on my own side of the political dial, being politically conservative or liberal becomes the encompassing context for their identity as a Roman Catholic. Indeed, I wonder how much of the alleged “confusion” about Pope Francis that we keep hearing about from our brothers and sisters in politically conservative circles owes simply to a conflating of faith with ideology.

Douthat admits to no such confusion. He’s already made his judgment about Pope Francis. We’re told that all was going swimmingly for “conservative Catholicism” (excepting, he admits, the failure of the Bush presidency) “until the election of Jorge Bergoglio as Pope Francis, that is.”  Although “most” of the cardinals who voted for Francis were not voting for “any kind of deliberate rejection of the magisterium of the previous two papacies,” for Douthat that’s apparently what they got. Francis, we’re told, “is risking far too much that is essential in his quest for new directions.” Conservatives, in response to this pope, should reappraise their relationship with Rome, Douthat says, remembering those moments in history when “the papacy has conspicuously failed to be either wise or courageous when orthodoxy is on the line” and remembering “Avignons and anti-popes as well!”

Whoa! So what is it that Pope Francis has done that demands our reflection on anti-popes? (Get ready to smile.) Douthat does not complain about Laudato Si’ or Evangelii Gaudium; he complains about the processes of the Synod on the Family and in particular about the arguments that some prelates aired for how the church should pastor Catholics who have been divorced and remarried. So, it’s the synod process that has Douthat in such a lather to talk about a crisis in the church. Right…

I think the Synod on the Family as a character in Douthat’s narrative is mostly a red herring. The crisis that theocons and other politically conservative Catholics are experiencing is not about the synod or about reception of the sacraments for those who are divorced and remarried. It’s not really about the faith at all. It’s a crisis of political ideology. In a lecture in which every other word is either “conservative” or “liberal,” it’s clear the real crisis at issue is political.

The crisis being experienced is about climate change, immigration, social justice, priority for the poor, and—yes—it’s about trickle-down economics.  It’s about the narrowing of ecclesial wiggle room for a particular political ideology and its associated policies.

It’s also a crisis of theocons’ own making, a byproduct of wrongheaded efforts (going back decades) to force a convergence between Catholicism and American neoconservativism. Those decades of effort are now coming to naught, as they had to, but not because of Francis (who doctrinally is completely congruent with Benedict and John Paul II). They’re coming to naught because of the inherent difference between faith and any political ideology. Faith should be distinct from yet still inform politics. It should never be harnessed to politics.