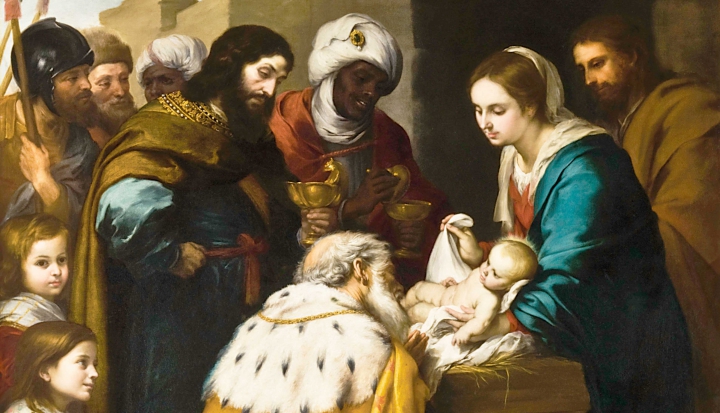 Perhaps this should have waited for the Epiphany.  But then I could never wait at Christmas, even as child.

I’ve always loved stories of the three kings. In Christian history, the miracle of the Magi has inspired many legends and fables. The single, brief gospel passage in Matthew offers little detail.  They came from the East, following a star. They brought gifts. They prostrated themselves in worship of the child.

Even the assumption that there were three Magi is not supported by the text. In Syrian Christian communities, which is where the Gospel of Matthew was probably written not long after the fall of Jerusalem, the legend is that there were twelve Magi.  Nor does Matthew make clear who the Magi were.  In Medieval Europe the tradition developed that they were kings, while most modern translations of the passage label the Magi as “astrologers.”  The Greek word used by Matthew (magoi) is elsewhere in the Bible and in early Christian usage is associated with magic. Many scholars believe that the reference is to Zoroastrian priests of ancient Persia, who would have been renowned in ancient Syria for their study of the heavens.  In truth, though, scholarship here is mostly speculation.

Likewise, the names commonly assigned to the Magi—Melchior, dark Balthazar, and Caspar—are certainly apocryphal. In non-European Christian traditions, a score of other names are used. By some accounts Melchior is from Persia, in others from Arabia; Balthazar from Babylon, while in others from Ethiopia, Caspar from India, while in others he is from Tarsus.

The Magi are often depicted as special representatives, too—such as with Balthazar’s dark skin, or the legend that each of the Magi represented different stages of life, from beardless youth to old age. Many of our stories of the Magi developed in the mystery plays of medieval Europe, which the guild of goldsmiths sometimes organized. Yet, whatever the provenance, the stories are often wonderful. In some accounts the three Magi were baptized by St. Thomas in his mission to the East. Others name Prester John as their descendent. Another legend has it that gifts of the Magi were stolen by the two thieves who shared Christ’s crucifixion, only to be returned in the tomb.  These are all poignant parables.

Some of my favorite stories are of the four Magi. What I love about these stories are the reminders that the real gifts of the Magi were never merely gold, incense, and spice.

Here in the United States, the story of a fourth Magi was popularized by Henry van Dyke in the 1890s and has been retold in various forms over the years. The central character is Artaban, a Persian priest of the Magi, who was renowned both for his scholarship and his kindness. When the star appeared in the heavens, he set out from Persia to Babylon to join with the other Magi in search of the newborn king with three great jewels: a ruby, a sapphire, and a “pearl of great price.” En route, he came upon someone dying from disease and, overcome with compassion, he stopped, praying to God about whether he should allow his kindness to make him late for his journey with the others.

While Artaban heals the sick man, he misses the others and must spend his first jewel so that he can begin the search for the Christ child alone. For the next 33 years he searches; over and over again he is delayed by his compassion and kindness toward the poor and sick, just missing Christ each time, spending the jewels he had intended for the babe.

Finally, he is in Jerusalem on the day of the crucifixion. As he heads to Golgotha, a woman—the child of one of the original Magi—calls out to him. She is destitute and being sold into slavery. Once again Artaban’s love and compassion deter him. He has now only the pearl of great price, but he gives it up to save the woman. At that moment, the skies darken and the earth shakes. A piece of tile falls from a roof and crushes him. He agonizes in his last moments that his life has been wasted, that he never found the king he sought to honor. A voice then comes—appropriately the words are from the Gospel of Matthew—“Truly I say unto you, whatever you have done for these the least of my brethren, you do unto me.”

In Slavic countries, the fourth Magi is a woman. Called the babushka (meaning old woman or grandma), the marvelous story is that a very poor old woman lived alone in the woods. Winter set in, with its dark and cold, and her food and firewood were gone.  She had resigned herself to death, when jingling bells and bright lights appeared in the darkness. The Magi had come, asking if she had heard of the birth of a child of light. They had seen his star, and they said he would be a king. When she replied that she had not, the Magi invited her to join them in looking for this child.

Thinking that she had no gifts worthy of a king—certainly nothing to match the gold and such the others would give—she sadly refused. Once they left her, though, she realized that even she had something to give to the babe after all. So, she set off to find the Magi, so that she too might worship and give. The legend is that in the dark and cold of winter she still seeks to find the Magi and the child. She wanders the world looking for the Christ child and giving what she can to the needy and good along the way.

How can we not believe such perfect stories? Every blessing to you and yours for Christmas!