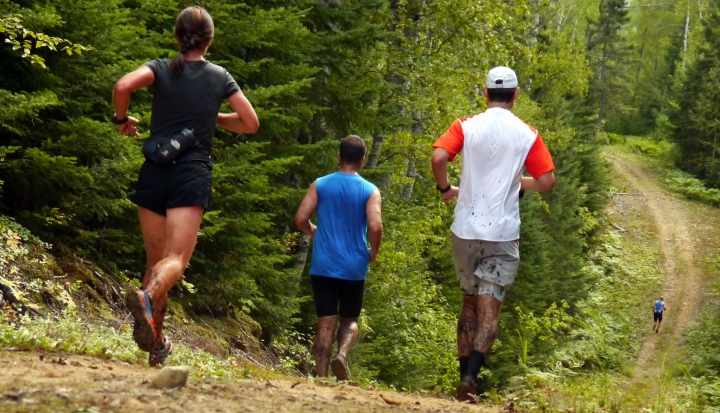 My wife and I run together at a local state park. “Together” is optimistic; I can no longer keep pace with her. We ran track together in college, but I am a few pounds heavier than in those days when I whipped around the track for the half-mile.
She kindly offers to slow down and keep me company, but I wave her forward. As she fades into the distance, I am left alone on the trail run. After a few minutes of thinking about work or what needs to be done at the house, I relax. I am warmed up. I take a left fork in the trail that leads to a steep hill, jagged with rocks. I may not be as fast as I used to be, but I am a bit more determined, stronger from the years that have passed.
At some point during my trail run, when my strides lengthen and my footfalls carry a metronomic rhythm, I forget the rest of the day. I enter the clarity of prayer. Writer Jamie Quatro describes that moment of transition as a “paradox: only when I’m fully present in my body do I begin to experience the absence of myself.” Caught in the euphoria of a good run, she feels “a wide universal sense.”
Sometimes I offer silent prayers, while other days I simply listen to what God wants me to hear. I do not mean to suggest that these euphoric moments imbue my legs with Olympian speed. I trudge, I heave, I strain. The state trails are better suited for the slow, crouching plod of hikers than the strides of runners. Good running and good praying are hard work, and the embrace of suffering is a path toward revelation.
Like running, prayer is a discipline that takes repeated practice. I have noticed that if I don’t pray one night, it is more difficult to return the next night. I can fill those minutes with so many other activities: watching television, scrolling endlessly on my phone, worrying about the future. Jesuit Joe Simmons writes, “When I fall away from running—or for that matter, from praying—I feel out of sorts and lazy; alien to my best self.” To say that I have made writing and prayer habitual actions is not to devalue their significance. Rather, when something becomes habit, it becomes part of our skin and soul. I run to run faster; I pray to pray better.
During my college years, when running meant racing, I taped an essay by George Sheehan above my desk. Sheehan, a cardiologist whose philosophical meditations on running contributed to the sport’s rise to popularity during the 1970s, was once asked to define the ultimate question of his life. His choice: “Did I win?” Sheehan quotes the poet Robert Frost to clarify his thoughts: “I am no longer concerned with good and evil. What concerns me is whether my offering will be acceptable.”
As Sheehan and Frost voiced these concerns in the twilight of their lives, so does running remind me of my own mortality. I enter the trail to willingly push my body to another level. Not the level of records or victories, but to reach the place of rhythm, ritual, and prayer where I feel transformed.
Prayer never helps me when I approach it with a desired outcome. I have learned that prayer is a method of discovery. Why talk to God if I already know the answers?
Running is the same. I have a route that I follow most days on the trail; after a jagged hill, the path becomes hardened mud that loops through the woods before exiting. There the sun bleaches the ground, and on a warm afternoon it is nearly scorching. Another hill brings me back to the cool of the woods, where I ascend a steady hill that drops into the entrance of the trail. The path itself is familiar, but I never feel the same way twice when running that route.
Thomas Merton once described the “beautiful running” of deer: “It is an awe-inspiring thing . . . Yet perfectly ordinary, everyday seeing. The deer reveals to me something essential in myself!” Prayer is finding wonder in the ordinary. So is running. When I run I am constantly reminded of the joy of creation. Running is rebirth.
A desire for revelation brings me back to the trails. Each day there is a pilgrimage. Although I might follow a route, I am really running against time. That sense of an eternal finish line has refigured how I approach prayer. I used to think faith and prayer were actions on the way to awareness and, once perfected, would result in an easy life. I have realized faith and prayer are sustaining, enabling, and evolving. I need to keep running. If I take a week or longer off, my breaths will falter, my legs will tire. Running and prayer are siblings in repetition.
When I do meet my wife again at the start of the trail, I usually have a lot to tell her. Prayer gets me talking. That is, once I catch my breath.
This article appeared in the October 2015 issue of U.S. Catholic (Vol. 80, No. 10, pages 45–46).