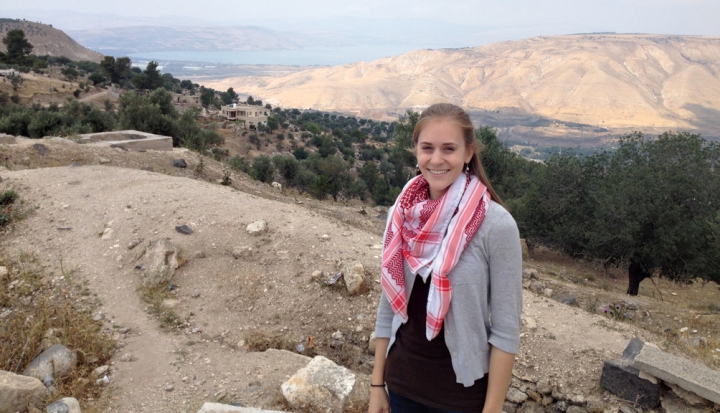 You know you’re in for an interesting conversation when a lifelong Catholic says that getting to know and love Islam helped her develop a deep knowledge and love for her own Catholic faith. That’s the experience of Jordan Denari, a 24-year-old research fellow at The Bridge Initiative, a new project of the Prince Alwaleed bin Talal Center for Muslim-Christian Understanding at Georgetown University in Washington.
Growing up Catholic and attending Catholic schools, Denari became interested in the Middle East as a teen. She wrote class papers on the Iraq War and the region in general. What really stirred her passion was a political email she received during her junior year of high school, forwarded enthusiastically by a family member.
The email equated Muslims with the terrorists responsible for the 9/11 attacks. “I was so upset by this, that a practicing Catholic would send such a thing,” Denari says. “My mom took me by the shoulders and said, ‘That’s why you have to write.’ I think it was a pivotal, vocational moment.”
Denari developed friendships with Muslim students while attending Georgetown as an undergrad. This led to conversations and experiences that motivated her to learn more about both their faith and her own. “I saw how committed Muslims are to prayer and also to community,” she says. “It pushed me to be better with my prayer life.” She went on an Ignatian prayer retreat, signed up for classes on Christianity, and joined a scripture reflection group. “I wanted to know why Catholics do what we do and believe what we believe. The answers I got were very powerful.”
While spending a year living in Amman, Jordan as a Fulbright scholar, Denari heard the call to prayer proclaimed five times a day from the tops of minarets. The melodious chant of “God is greater! Come to prayer!” became for her an ongoing spiritual enrichment.
“In the West, we go about our lives with no reminders of prayer and God,” Denari says. “The call to prayer is soothing, and it helped me to step back, to pray, and reflect on my day.”
She was struck by the social justice movements in the Islamic tradition as well. They pushed her to dig deeper into what she calls “the radical ways that Jesus challenged the norms and the injustices of his time.” As she was drawn into Islam she discovered more about her own faith. “What I saw was beautiful,” she says. “And it helped me see more beauty in my own Catholic faith tradition, too.”
These rich experiences led Jordan to publish on Muslim-Christian relations. The founders of The Bridge Initiative took notice and approached her earlier this year as they began setting up a new project aimed at educating the public about Islamophobia. Now she works there full time, researching and writing about Islamophobia in the West.
“Our job is to raise public awareness about Islamophobia through education,” she explains. That includes preparing reports, providing analysis and commentary on current events, and drawing attention to the work of activists promoting prejudicial narratives and policies.
This type of work isn’t purely an academic exercise—it can have a real impact on combating prejudice around the world. “Islamophobia is simply the latest reincarnation of the prejudices that have targeted other communities like Jews, Catholics, African Americans, and the LGBTQ community,” Denari says, “and it has real consequences on Muslim communities living in Western societies.”
Denari insists that you don’t need to have a full-time job in the field of interfaith relations in order to work toward better Muslim-Christian understanding. She’s quick to cite St. John Paul II, who said that interreligious dialogue is part of every Christian’s baptismal call—not necessarily the formal kind scholars carry on, but “the dialogue of life” that involves getting to know people of other faiths and sharing life experiences with each other.
A Catholic parish, she suggests, might create an opportunity for this dialogue by hosting the traditional fast-breaking meal called the iftar (“breakfast”) at the end of Ramadan. Parishioners can invite their Muslim neighbors to come. Both Catholics and Muslims who attend might learn together that prayer, fasting, and almsgiving are essential practices of both faiths.
Denari also encourages Catholics to cooperate with Muslims in community service projects. Working side by side not only helps participants get to know each other better and establish friendships but also results in improving the community they share.
“In whatever it is,” Denari says, “you don’t need to talk theology. Just get to know each other. That in itself is important and essential.”
This article appeared in the September 2015 issue of U.S. Catholic (Vol. 80, No. 9, pages 47–48).
Image: Courtesy of Jordan Denari
TagsIn Person Interfaith