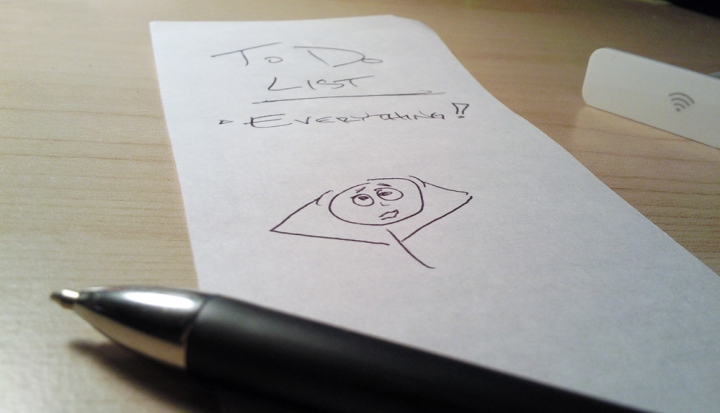 Every weeknight, sometime between 9:30 and 10:45 p.m., my husband will stand and say, “I’m heading up.” He climbs the stairs, stops in the bathroom, and gets into bed. This takes about approximately a minute and 47 seconds. He might read for a while. Then he falls asleep.

“I’m heading up” has become the cue for my mind to zoom around to all the things I meant to do that evening but did not. Did I make my lunch? Sign that school form? Oh look, I meant to wash those pots in the sink. Did I answer that one e-mail? As I check the computer, I’ll invariably find another e-mail or two that need answering. (I’ve discovered that legions of working women are e-mailing after 9:30 at night.) And then there’s the casual announcement by a child that a giant trifold board is required for the project due tomorrow. Calling it quits for the night is hard because my worth depends on how much I accomplished in the past 24 hours—right?

Somewhere back in the 1980s, it became an accepted fact that parents are ridiculously busy. The 1970s recession, plus the loss of many jobs that paid a real living wage, meant that many working- and middle-class people could no longer support a family on one parent’s salary.