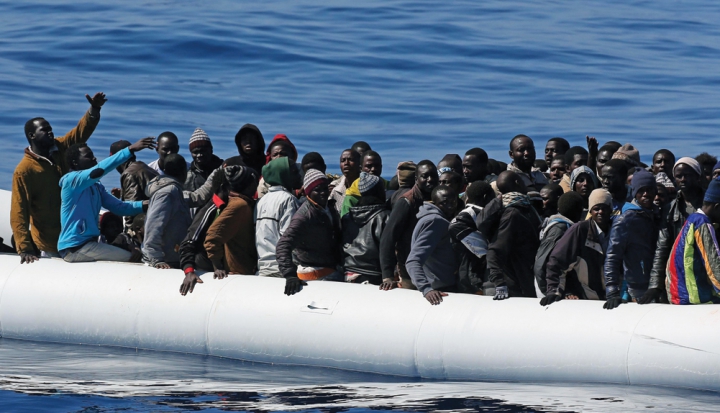 April proved to be an incredibly cruel month for economic and political refugees attempting to escape conflict and poverty in the Middle East and North Africa via desperate Mediterranean Sea crossings. In two separate but typical incidents, more than 1,300 people were feared dead. Overloaded and unseaworthy watercraft capsized as rescuers approached, trapping scores below decks and tossing other migrants into the frigid seas.
In November European powers seemed intent on playing hot potato with the problem of migrants on the Mediterranean. An overburdened Italian Coast Guard, having pulled more than 130,000 people from the high seas last year, was throwing up its institutional hands; Italy was barely coping with a debt crisis and argued that protecting migrants was a pan-European issue, not the sole responsibility of states that migrants hoped to use as landfalls.
The burden was handed off to the border management agency Frontex, which launched an unconvincing search-and-rescue mission, Operation Triton. Several states immediately rejected any suggestion that Triton’s cost be shared or that the crisis demanded a more vigorous response. Some European leaders even argued that a robust response to the crisis would be counterproductive, encouraging more to take to the seas (and apparently arguing for some migrant deaths by way of example to others).
One global leader argued, however, not only for a response to the crisis but for an integrated, comprehensive plan that would save souls on the high seas and prevent those rescued from becoming lost souls on the continent. That leader was Pope Francis, speaking in November before the European Parliament in Strasbourg, France. Arguing that addressing the migrant crisis must be a “united” European responsibility, Pope Francis cautioned, “We cannot allow the Mediterranean to become a vast cemetery.”
Just a few months after Pope Francis issued this warning, his worst fears are being realized. The underfunded response cobbled together by Frontex has proved woefully inadequate. Whole families escaping terror, violence, and poverty are disappearing into the sea.
After the latest loss of life, described as a historic “massacre” on the Mediterranean by one U.N. official, Francis issued a “heartfelt appeal” for solidarity in the face of such horror, urging that the international community “react decisively and quickly to see to it that such tragedies are not repeated.”
“They are men and women like us . . . starving, persecuted, wounded, exploited victims of war,” Francis said. “They were looking for a better life.”
It is easy to understand why so many are willing to accept the risks of this near-suicidal flight to Europe. ISIS militants are driving many before their merciless advance, but just as many are fleeing hopelessness. Poverty and disorder are pushing a historic migration of peoples overland from as far south as Central Africa to the chaos and menace of the Libyan coast. Once there, the “dream” of these desperate migrants is to attempt an escape in dubious seacraft overloaded with victims of trafficking. The boats are so obviously inadequate that it has been reported some migrants have to be forced into them at gunpoint.
There are many improvements the European community can undertake. They can begin with a search-and-rescue response adequately scaled to the level of the crisis and open up legal channels for migration during the geopolitical emergency that engulfs the Middle East. Beyond such important steps, however, the community must begin an examination of conscience on the nationalist, even racist, anxieties that are partly holding back a humane response.
In Strasbourg Pope Francis reminded continental leaders that the concepts of human rights and human dignity emerged first in Europe, guided by the church and faith in God’s justice. Now comes the difficult measure of those words.
This column appeared in the June 2015 issue of U.S. Catholic (Vol. 80, No. 6, page 39).
Image: ©Alessandro Di Meo/Zuma Press/Newscom
TagsImmigration Margin Notes Pope War and peace