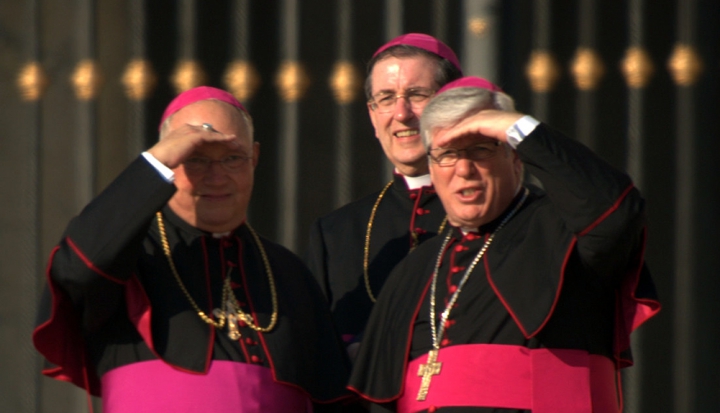 When Pope Francis announced his new crop of cardinals earlier this year, it did not go unnoticed that no Americans were on the list. There was no red hat for Chicago’s new archbishop, Blase Cupich, although this wasn’t really a surprise since his predecessor, Cardinal Francis George, was at the time still alive and eligible to vote in a papal conclave. Neither did Archbishop José Gomez of Los Angeles receive the honor, but previous L.A. archbishop Cardinal Roger Mahony is also still of voting age. Bishops are required to submit their resignation at age 75, but cardinals are still able to vote in a conclave until they turn 80. And tradition dictates that no diocese will have more than one cardinal of voting age, an unwritten rule that Pope Francis followed in his most recent round of appointments. (With the recent passing of Chicago’s Cardinal George, Cupich may end up on Francis’ next list of appointments, but there’s still no guarantee.)

Francis certainly did, however, shake up many traditions surrounding who becomes a cardinal. Dioceses that normally have cardinals are finding that they no longer do. And red hats (birettas) and capes are being distributed in some unexpected places. Appointments for men in Tonga, Myanmar, and Santiago de Cabo Verde confirm the pope’s interest in building a genuinely global church where ecclesiastical power is not concentrated so mightily in Europe.

Most people probably already know that cardinals elect the pope, but that job is actually one that they are rarely called upon to perform. Their primary responsibility is to serve as advisors and assistants to the pope as he completes his duties as supreme pastor. Whatever else a cardinal may be doing (as head of a diocese or as chief of a Vatican congregation), he is always available to the pontiff. According to the Code of Canon Law, a cardinal remains at the service of the pope both personally and as a member of the College of Cardinals, which may be summoned by the pope for particular needs.

Like Chicago, there are archdioceses throughout the world whose archbishops are traditionally appointed cardinals, but the pope has final authority in this regard. A pope may make changes because he believes that there are too many cardinals in one country when compared to another, or he may wish to recognize the work of a particular cleric or theologian. Popes send important signals about their values and hopes for the church when they make—or withhold—appointments.

Since 1917 the code has required that a man must be a priest to be eligible for appointment to the College of Cardinals. An appointee who is not a bishop must be consecrated a bishop, but the pope can make exceptions, as John Paul II did for Jesuit theologian Avery Dulles in 2001. The first cardinals were probably senior clerics of some of Rome’s most important churches, now known as titular churches; others were bishops from nearby dioceses known as suburbicarian sees.

Since its work is centered on service to the pope in governing the church, some theologians have argued that the College of Cardinals should contain laypeople of both sexes. It is said that Paul VI considered giving a red hat to the Catholic philosopher and layman Jacques Maritain. There have been so-called lay cardinals in the past, but they were men in minor orders. Given his openness to new possibilities, Pope Francis might someday consider lay cardinals, both men and women.