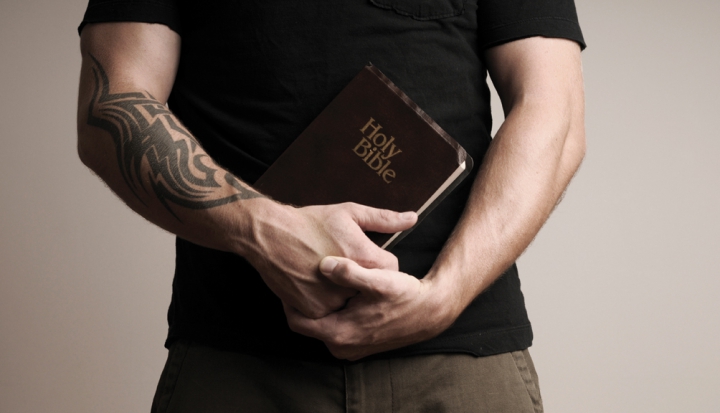 An assignment to write a feature on male spirituality overlaps with a serious medical diagnosis, surgery, and an unexpected awakening.

It was more than a year ago when I got the call from U.S. Catholic asking me if I’d be interested in doing a feature article on male spirituality (“Man up,” March 2015). I jumped at the chance. For as long as I can remember, I’ve been fascinated about the mysteries of God and existence. It’s driven me past listening to sermons in the pew to periodic spurts of reading and meditation.

Not that I was that disciplined in my own spiritual practices. Ten minutes sitting in silence has always been tougher for me than an hour in the gym. But, for a guy, I thought I was pretty well connected. I figured I had this assignment under control.

Soon I would discover that I really had nothing under control.

Last March, an MRI revealed a tumor the size of a tennis ball in my abdomen. Initially, doctors diagnosed it as a cyst that they could just drain, and said I’d be done with it. More tests revealed that it was a very rare cancer—of the appendix—which required two major surgeries in as many months. Then, while I was still in a hospital bed, my brother called and told me that my dad, who’d been suffering for three years with dementia, had to go into a nursing home because the stress was bringing my mother, as primary caregiver, to the verge of a nervous breakdown.

What followed were several more months of turmoil that rocked my world and deepened my faith.

It was during that time—racked by a series of infections, weakness, and the worst physical pain in my life—that I did research and conducted interviews for this article. I tried to dig up as much information as I could about male spirituality and transformation, hoping along the way to find clues about what these trials meant for my family and me.

In every book I read, in every phone conversation I had, from a make-shift bed set up on the couch in my family room, the same message kept repeating. It wasn’t one I wanted to hear but there it was: Suffering turns out to be the only thing powerful enough to break a man’s ego to such an extent that he opens up to a deeper level of consciousness about himself, God, and the world.

One of my early interviews was with Tom McGrath of Loyola Press who, with colleague Joe Durepos, compiled a series of meditations by Franciscan Father Richard Rohr in a book called On the Threshold of Transformation (Loyola Press, 2010). McGrath sent me a copy, and I was immediately astounded by how much it spoke to me.

I read the back cover first. It led with a statement that men must “come to grips with the fact that some form of suffering or letting go is essential to achieving wholeness, holiness, and happiness.” Then I read Durepos’ “Note to the Reader” at the beginning of the book. On the second page, he wrote something that so paralleled what was happening in my own life that it was almost creepy:

“Shortly after I started work on this project,” writes Durepos, “a series of misfortunes descended on me that would challenge your credulity if I were to list them…. I lived this book as I worked on it. I can assure you it is field-tested. I used the wisdom you will find in these pages to navigate the most difficult time in my life.”

He goes on to say: “I’ve seen how Richard’s work has helped many men. I’ve also experienced firsthand, during the period of putting this book together, the gift of Richard’s wisdom in transforming pain and tragedy into gift and blessing.”

After I interviewed Rohr for my article, I really got what Durepos was talking about. Probing for guidance, I googled Rohr and read more on his philosophy about male spirituality. When I was too spent to read, I checked out his talks on YouTube.

I found one video called “Transformative Suffering: A Reading of Richard Rohr’s Meditations.” Since then, I’ve watched it over and over. And every time, it’s help me to make sense of the life changes that had turned my world upside down.

Just over 15 minutes long, the clip is packed with profound words and striking images. It captures the essence of the philosophies that turned up repeatedly in the research I was doing about male spirituality and transformation.

Here’s a sampling of Rohr’s wisdom from that YouTube video:

And then there was this one: Only people who have suffered in some way can save each other. In general, you can lead people on the spiritual journey as far as you yourself have gone. You cannot talk about or model the path beyond that. That is why the best thing you can keep doing for people is to stay on the journey.

One thing I’ve learned on the rocky road I’ve traveled over the past year is that I really knew less about the journey than I had thought.

Durepos admits in his introductory remarks that he can’t say it was good that so much calamity came down on him and his family while working on Rohr’s book. But, he said, “I can say that good has come out of it.”

I could say the same thing here.

As I was wrapping up my interview with Rohr for the U.S. Catholic article, we got into some friendly conversation, and he asked a few questions about me. I told him a little about the challenges I was facing at the time and expressed wonder at how it all seemed to align with the very topic I’d been assigned to investigate for the magazine.