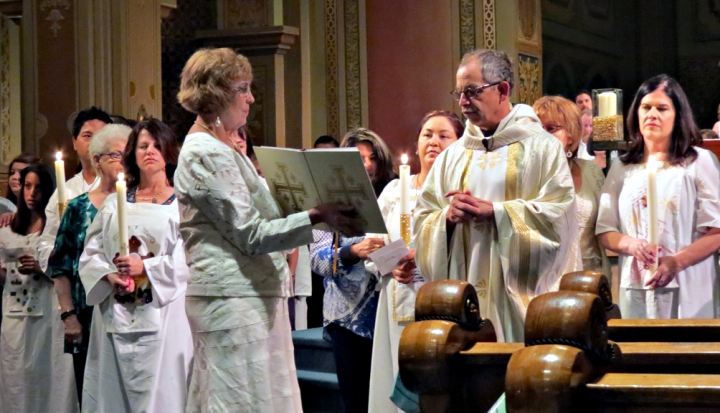 A traditional Chinese proverb teaches that “women hold up half the sky.” Women also hold up half the church. This truth may have been on Pope Francis’ mind when he told reporters in July 2013, “I think that we haven’t yet come up with a deep theology of the woman in the church.”

A few months later, in his apostolic exhortation Evangelii Gaudium (The Joy of the Gospel), he elaborated that women make indispensable contributions to society but that “we need to create still broader opportunities for a more incisive female presence.” Pope Francis argued that the presence of women must be guaranteed in the workplace and “in the various other settings where important decisions are made, both in the church and in social structures.”

The pope is exactly right: The church does need a deep theology of the woman, but the question we have to ask is: How do we get there?

Some might object to this proposal by arguing that the bishops are the authentic teachers of the faith. But you can’t teach what you don’t know. Bishops in the Roman Catholic Church are all male. They cannot speak from experience about what it means to be a woman in the church. If differences between the sexes matter—and in current expressions of Catholic theology they do—then the bishops should recognize their obvious limitations in this sphere of human experience and welcome the voices of women.

But how can we fruitfully structure this conversation? We need a global consultation, led by female theologians and women religious, tasked with listening and learning from stories of everyday women and the social data that provide the context for those personal narratives. For this major undertaking to be successful, the women leading this process should adhere to the following five rules:

Even the female researchers who might lead this project need to learn from other women. No two women are exactly alike, and when we recognize differences of citizenship, ethnicity, language, age, class, sexual orientation, and all of the other distinctive ways in which women’s experiences are formed and shaped, we then realize the difficulty of talking across these areas of difference.

As researchers consult widely, it will be
especially important for them to listen to survivor stories, so they may learn from women abused in intimate relationships; women who have lost children to war, starvation, curable disease, or violence; women in vowed religious communities who have been told they are in grave error and in need of reform; and women whose labor is valued less than their male counterparts. Ask these women what they need to thrive.

The idea of a global consultation is certainly daunting, but we should remind ourselves that we would not be starting from scratch. Women have been a part of the church from the beginning. And our faith tradition contains stories of many remarkable women who have shaped and passed on the faith, even if most of their stories were told by men.

The researchers who undertake this project should receive the fruits of the theologies that have already been developed by women in the church. Some of these women identify as feminist, while some prefer other descriptors. For example, many black women prefer Alice Walker’s term, “womanist theology,” while many Latinas prefer to call their work mujerista theology.

Women have learned that doing theology from the perspective of women is life-giving, challenging, and liberating work. The task of feminist theology, as it emerged in its second and third waves, is not only to offer critical perspectives of past theologies or to uncover the lost stories of women but also to construct a way forward that is empowering to all.

Feminist, womanist, and mujerista theologians have been doing this work in university classrooms, academic conferences, women’s spirituality prayer groups, and in publications like this one. Unfortunately their contributions have often met resistance from church leaders instead of open engagement. If we are to seriously develop a new theology of the woman, this new theology must incorporate what has been learned over the past 50 years.

It is tempting to focus exclusively on the particularity of each woman’s story and the differences among experiences. But this task force should model cross-cultural engagement rooted in a
process that seeks to build consensus around
contested issues.

We should use our reason to reflect on our human experiences in order to draw norms about what is right or wrong. This is the natural law approach to Catholic social teachings, which are addressed to all people of good will. The new theology of women should try to build bridges of understanding between women in different parts of the world and should seek common ground.

Some issues might remain controversial for some time. It might not be possible at this juncture to come to a universal agreement on how to promote women’s leadership in the institutional church or how to best empower women to make good decisions in sexual relationships. But there are some issues that should not be controversial. If women in the task force emphasize areas of agreement, these can be a fruitful foundation for further collaboration.

A good starting point in this area is to combat violence against women and the cultural expressions of this misogyny such as sexual slavery, human trafficking, and the victimization of women in the pornography industry.

Other possibilities for building common ground include making childbirth safer for women, offering girls equal access to education, and ensuring equal pay for women as they work alongside men.

It might sound obvious, but this is an important rule for the task force. Researchers should consult data beyond the publications of the previous popes and councils. In crafting their new theology, the authors should cite from a range of sources, build a case, and substantiate their claims with evidence.

Too often Vatican documents on women contain stereotypes (like the nurturing mother), platitudes (like the feminine genius), or unsubstantiated claims (like the claim in Evangelii Gaudium that women possess more sensitivity and intuition than men). If the descriptive claims and normative conclusions of the new theology are to be taken seriously, they must be defended, not simply asserted.

Those tasked with constructing this new theology should avoid proof-texting from the scriptures or cherry-picking from the popes. And avoid at all costs the phrase, “As we have always taught . . . .”

5. Write in an open and dialogical tone

Finally, the authors of the new theology of women should acknowledge the limitations of whatever new theology emerges and should encourage others to build on their work. A new document is not to immediately become the last word on the subject but would instead be a new point of conversation, a new jumping-off point.

If scholars write in an open, inviting tone, nuancing their claims and not overstepping their legitimate authority, this new theology is more likely to be well received by a broad audience. When this new theology is presented in a popular form, it should be distributed widely, using the mass media as a pulpit for teaching. Let’s use social media and the mainstream press to build awareness of the equal dignity of women and the important contributions women can make to society and the church.

If women do indeed also hold up half the church, it is time to invite them to collaborate on the construction of theology. Enabling and empowering women to construct a new theology of women is a good place to start. It is time to craft a process in which women are at the table, speaking from their experiences, and constructing a more adequate theological anthropology that takes into account diverse voices of women across the globe.

1. Catholics already have a “deep theology of women in the church” because Catholic women theologians have already been crafting it.

Representative of “other”:
“Female theologians have been crafting it, but their work is not taken as seriously as it should be.”

2. We need to move away from a theology that only applies to men or women in favor of more gender-neutral approaches.

Representative of “other”:
“We need an inclusive approach, not neutral. Don’t lose the particular when speaking of the whole.”

3. The church’s theology of women cannot change because it is rooted in the Bible, not in a modern understanding of women’s roles in society.

5. A new theology of women should be drafted by:

52% – A broad group that includes equal numbers of male and female participants representing all segments of the church.
23% – An all-female council comprised of women theologians, religious sisters, and lay women.
13% – A group of mostly women with a few male bishops included.
1% – All men, including bishops, priests, and male theologians.
1% – Mostly bishops, with a few women consultants.
10% – Other

Representative of “other”:
“We do not need a separate theology of women. We need a church that truly welcomes and encourages women as well as men to fully use the gifts God has given them.”

6. I find it hard to believe that Catholic Church leadership would allow a consultation on the role of women in the church to actually be led by women, as Emily Reimer-Barry suggests.

Representative of “other”:
“They might allow it, but even so, the women leading the discussion would all be hand-picked by men.”

Results are based on survey responses from 301 USCatholic.org visitors.

Emily Reimer-Barry is an assistant professor of theology and religious studies at the University of San Diego.