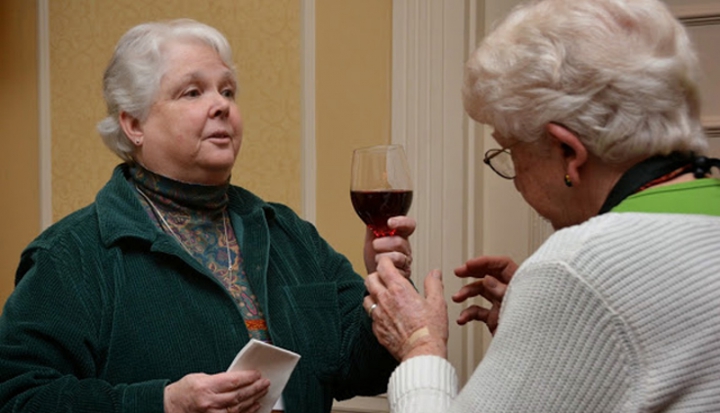 As a roly-poly six-month-old, Sister Janice K. won her parents’ hearts. “They always made me feel very special,” says Sister Janice. “I always knew that they had wanted me.”

Being adopted was a “great gift,” says Sister Janice, which has shaped her call to Mercy in significant ways. The Sisters of Mercy are sharing her story and those of other members of the Mercy family in order to raise awareness about adoption during November, National Adoption Month.

Born in 1949 to a young, single woman, baby Janice was placed in St. Agnes Home in Hartford, Connecticut, which was founded by the Sisters of Mercy and is today a residential center for pregnant and parenting adolescent mothers. It is marking its centennial year. Sister Janice sometimes jokes that she had “early roots in Mercy” because she was cared for by Sisters of Mercy in her infancy.

As it turned out, Janice’s adoptive mother had herself been adopted and so didn’t hesitate to consider this option after several miscarriages. She and Janice’s adoptive father yearned for a sibling for Janice’s older sister, Sharon. Although Janice’s mother would later have another biological daughter, Lois, Janice says her sense of being chosen and cherished was always reinforced by both parents. Her father, a supervisor at the aviation company Pratt & Whitney, made her feel particularly special.

“When I was five or six, my father would put me on his lap and tell me this wonderful princess story, of how he and Mom went to look for me and picked me out and brought me home,” recalls Sister Janice. “He was a very good storyteller and I would ask him to tell me the story again and again!”

Janice first came to know the Sisters of Mercy when they taught religious education classes at her public elementary school. In high school, she sensed a calling to religious life, but her mother convinced her to go to college first. Janice flourished at Eastern Connecticut State University, where as student government member she helped oversee one of the first co-ed high-rise apartment complexes in the country. She then taught in public schools for nearly a decade—a time when she also came to know several Sisters of Mercy in her parish. “I started visiting the convent, praying with the sisters and slowly getting to know Mercy,” she says. “And the nudge to become a sister came back.”

Sister Janice’s primary ministry as a Sister of Mercy has been in education. She taught in Catholic schools for years before becoming a tutor five years ago at Grace Academy, a free interfaith middle school for low-income girls in Hartford. “As an educator, I have always had a soft place in my heart for struggling students, because that’s what I was as a child,” says Sister Janice. “I seek to build up children and instill love in them, as well as teach them what they need to learn.”

Social justice is also important to Sister Janice. She notes that many of the girls she teaches come from an indigenous community in Myanmar (Burma); their families, she says, work hard to overcome poverty but struggle in a city as expensive as Hartford. These girls, as well as the guests at a soup kitchen where Sister Janice serves breakfast twice a week, teach her much “about humility, resilience and faith,” she says.

Sister Janice’s life in Mercy helped her to cope with the disappointment she felt in her 40s when her birth mother, whom she had contacted out of “a deep desire to come to know where my roots came from,” did not reciprocate her interest in establishing a relationship. “I cherish the one letter I received from her, but when she didn’t write back again I had to let it go,” says Sister Janice reflectively. “But when I look back on my life, I have sensed God’s presence from the beginning. My birth mother could have had an abortion, but instead she chose what has to be one of the hardest things for a mother to do—to give up her child for adoption in an act of love.”

Her sister Sharon found having an adopted sister so fulfilling that she and her husband adopted a child, Trish, who has Down syndrome, when Trish was four years old.

Pointing out that Scripture tells us “we are adopted children of God,” Sister Janice says, “I have always felt like I really understood what that means.”

This article originally appeared on the website of the Sisters of Mercy of the Americas (www.sistersofmercy.org). The original posting can be found here.

Catherine Walsh is the communications specialist for the Sisters of Mercy of the America, Northeast Community.