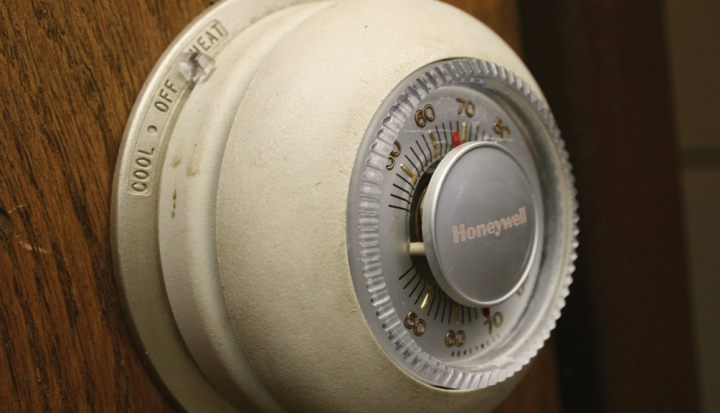 This holiday season, turn down the thermostat and give peace a chance.

The season of the prince of peace is upon us once again, yet the world seems aswirl with violence and despair. The Ebola virus has the nation on edge while it reaps a terrible harvest in West Africa. Another virus, this one of violence, is sweeping across the nations of the Middle East and throughout the Arab world. What has become of the Arab Spring? Only tiny Tunisia appears to have survived the tempest thrown up by efforts to tear down Arab tyrants and jump-start democracy in the region.

Flying back from his historic visit to South Korea in August, Pope Francis, surveying a legion of conflicts breaking out around the world, wondered if a kind of World War III had not already begun. “Today we are in a world at war, everywhere,” the pope told reporters. “We’re in the Third World War, but bit by bit.”

Francis ran through a litany of violence, noting ethnic cleansing, torture, massacres, kidnapping, rape—the entire motley range of violence associated with war making. “It’s a world at war in which these cruelties are done,” he said.

As Francis spoke to reporters, Israel was unleashing a devastating bombardment of the Gaza Strip; Christians, Yazidis, and other religious minorities in Iraq and Syria were running for their lives; and Libya was breaking down into civil war. Christians and Muslims were at each other’s throats in the Central African Republic, and a number of other African nations were confronted by a different hydra head of regional Islamic militancy, Boko Haram.

In South Sudan, no Muslim militants were required to produce conflict. Instead, competing Christian tribal groups brutally set upon each other in an on-again, off-again civil war that threatens to implode the world’s newest nation. And not to be left out, a slack-jawed Europe has watched Ukraine in horrified amazement as all the components of a long-feared power showdown between a remnant Warsaw Pact and the West’s NATO forces were drawn together by a separatist movement within Ukraine’s Donetsk and Luhansk regions.

Energy analyst Kurt Cobb counted up this piecemeal World War III on his blog, Resource Insights. Focusing closely on each conflict, he suggests they have one thing in common: “It can be no accident that the raging fights in Syria, Iraq, Libya, and Ukraine all coincide with areas rich in energy resources or for which imported energy resources are at risk. There are other conflicts. But these are the ones that are transfixing the eyes of the world, and these are the ones in which major powers are taking sides and mounting major responses.”

In Syria, ISIS bankrolls its apocalyptic vision through natural gas and oil sales on the black market. In South Sudan, divvying up the new nation’s oil resources is one component of its persisting conflict. Rebel forces in the Central African Republic emerged from the nation’s mineral- and oil-rich regions and seek to retain control of them.

Libyan rebels, like ISIS militants, seek to fund their offensive through oil sales. And restricting natural gas and oil that flows out of Russia and into Europe has been part of President Vladimir Putin’s strategic playbook as he seeks to solidify Russian hegemony in Ukraine’s eastern regions. It is a world at war for and through fossil fuels.

In this season of grace and peace, by all means put your baby Jesus vibes to good use by looking up a local chapter of Pax Christi USA. But you may wish to consider a practical promotion of peace as well. Take a look at how your family and your business use energy. Are there wasteful practices you can shut down, excessive use you can cut off?

Energy sales fuel conflict around the world, drawing the attention of the remaining great powers. We all have a hand in the violence because of a too-often unexamined approach to the exploitation of finite energy resources. This Christmas, cut down your energy use and cut down the conflict. Turn down your thermostat for peace.