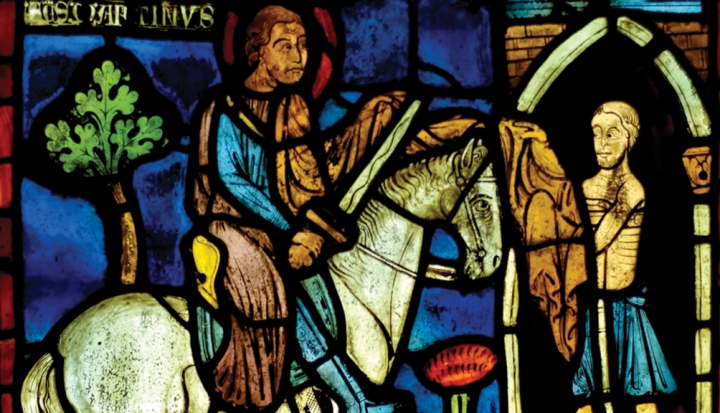 In the parish church of my youth, my family often sat under a stained glass window that depicted a poor man lying on the ground with his hand out to the Roman officer towering over him. Oddly, the soldier was cutting his own cloak in two. It was a long time before I learned that the Roman was St. Martin of Tours, a patron saint of soldiers.

My dad was a World War II veteran for whom veterans were a lifelong cause. He joined a veterans’ organization soon after he got out of the service. Besides just seeking camaraderie, he had a genuine interest in veteran affairs, and he rose through the ranks until he became the organization’s national leader in the late 1960s. This involvement continued for another three decades, into his retirement. Dad was also a devout Catholic, but I’m not sure how much his two convictions—faith and veterans—mixed.

A pre-Vatican II Catholic, Dad would often tell us kids any time we complained about some small thing to “offer it up”—which I heard as “suck it up”—with a twinkle in his eye. It wasn’t a joke. He believed in redemptive suffering; he even had a book on the topic. Around the time that he developed lung cancer, he prayed for the intercession of St. Peregrine, a patron for cancer victims. Later, he accepted that the treatments weren’t working, and turned to St. Jude, the patron for hopeless causes, whose prayer was printed on my dad’s funeral card.

I don’t know, however, if Dad ever sought any saints’ intercession on behalf of his veterans avocation. Despite a pantheon of patronages that covers hairdressers and nagging spouses, neither the church nor tradition recognizes any patron saints of veterans. Perhaps that’s because there are already several who could conceivably do double duty as veteran patrons. Few of them, however, would likely appear on a recruiting poster or, it seems, give much intercessory comfort to a proud veteran.

St. Martin of Tours, for example, became a highly regarded churchman, but Butler’s Lives of the Saints (Christian Classics) says he has “rather curiously come to be looked on as a ‘soldier saint.’ ” That odd image on my church’s stained glass window tells the story of then-catechumen Martin encountering a beggar. Having no money, he cut his cloak in half to share it with the man. Later, Martin had a dream in which he saw Jesus dressed in the poor man’s half of the garment, which caused him to seek immediate baptism. He remained in the army, but when there was about to be a battle in Gaul, he demurred. “I am a soldier of Christ,” he reportedly declared, “and it is not lawful for me to fight.” After a brief incarceration, he left the army and devoted his life to the church.

Ironically, St. Martin’s feast day on November 11 coincides with the American celebration of Veterans Day. But in addition to being a patron of soldiers, Martin—the soldier who gave up the military because it contradicted his Catholic faith—is also the patron saint of conscientious objectors. His story is not altogether different from those of many other saints who ultimately chose Christ over combat. What makes Martin’s story unusual is his long life—he died around the age of 80, while other objecting soldiers were typically martyred in their prime.

Perhaps the best known of these other conscientious objectors is St. Sebastian, whose “natural inclinations were averse from a military life,” according to Butler’s. His Christian ministering earned him a death sentence to be carried out by archers. Despite the iconic images of him riddled with arrows, he survived the execution attempt and was instead beaten to death. In one of those weird patronages, Sebastian is patron of both soldiers and archers. This man who chose Christ over the military is also the patron of an organization for some who chose both—Catholic War Veterans of the United States of America—and perhaps therefore an unofficial patron of veterans.

Among other military patrons, St. Marcellus, a Roman centurion, gave up his weapons and renounced the military, choosing to “serve Jesus Christ the eternal king” rather than the Romans’ “gods of wood and stone, which are deaf and dumb idols.” St. Theodore the General was a secret Christian until he was exposed, but a military court released him, considering his conversion a mistake. St. Adrian of Nicomedia, a pagan soldier in the imperial court, watched the strength of the Christians he persecuted and announced himself converted. All of these soldiers were executed. The saint known as Julius the Veteran was a soldier for 27 years and was ultimately martyred for refusing to renounce his faith. But he is neither a patron for soldiers nor, despite his name, for veterans.

With the rise of Christianity and its integration into the state across Europe, wars often had Christian motivation and justification, and patrons of soldiers in the Middle Ages were not martyrs for the faith. The French St. Louis IX, the Crusader king and soldier patron, led two failed Crusades. More pointedly, Louis was taken captive during the first and had to be ransomed. Illness killed him during the second.

The most successful soldier saint might have been a woman, St. Joan of Arc. Inspired by visions that led the French to a victory over the English, she was eventually captured. English Catholic churchmen tried, condemned, and executed her, and she was exonerated by the church two decades later.

Some other soldier patrons can be either harder to imitate or understand: St. George, who is best known for fighting a dragon; Michael, the archangel who fought Satan and is, after all, an angel; and the apostle James, whose connection to the military is unclear at best. Some soldiers who became saints were successful in their military careers, such as England’s Alfred the Great, Stephen of Hungary, and Vladimir of Russia, but none are claimed as military patrons. Among saints who lived since the Crusades or the European Christian wars, there seem to be no more soldier patrons.

With numerous—and varied—military saints, why is no one honored as a patron of military veterans? To some, this might seem to be a dishonor to veterans, something akin to the often neglectful treatment of veterans in this country. Ultimately, the lack of a patron might be a question for veterans.

Throughout Christian history, most patronages have probably emerged as a result of popular devotions, not church dictates. Maybe the real reason is simply that veterans haven’t chosen a patron. This may be due to the fact that many veterans find honor in their service, while soldier saints who rejected the military like Martin of Tours likely did not share such pride. Such saints would not be good candidates to be intercessors for veterans.

More to the point, perhaps, veterans don’t often talk about what they did in the war. My dad, a veteran’s veteran, didn’t talk much about his experience; instead, he told my brothers and me that he hoped we would never qualify to belong to his veterans group. Like him, many veterans privatize their experiences, willing to talk only to other vets. Maybe the bottom line is that they simply aren’t willing to involve a saint who wasn’t there.

So Dad probably didn’t ever seek a saint’s intercession on behalf of veterans. But maybe he, and many other veterans, confront their experiences by offering them up, by sharing in and cooperating with the sacrifice of Jesus. What I once took to be quaint sentimental theology, I now realize has a sweet richness to it. When the offering is accompanied by an act of mercy—perhaps offering up one’s suffering on behalf of another or, further, doing something to help the suffering of another—it calls to mind St. Paul’s language (which a drill sergeant might say): “If one member suffers, all the members suffer with it; or if one member is honored, all the members rejoice with it” (1 Cor. 12:26).

That sense that “we’re all in it together” pervades the military, of course, and echoes for veterans. Faith also obliges us to look out for one another. After my dad’s death, people I didn’t know would tell me a good thing he had done for them or a family member. Whether it was as a fellow veteran, an attorney, or just a guy, he had gotten them out of trouble, lent them money, given good advice, or had just been there. Maybe that stained glass window had more impact than I thought.