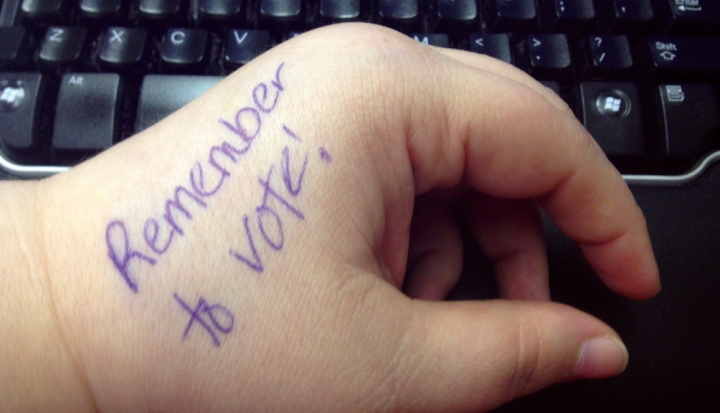 Want to cast a vote for democracy? Stand up and be counted on Election Day.

If you are among the less than 50 percent of registered voters expected to make the effort to pull a lever—or fill in a circle, or touch a computer screen—this month, then “bully for you,” as Teddy Roosevelt might say. You are doing your part to keep the American experiment moving along. Your determination to cast a vote is especially commendable during a time when the act of voting itself has been under attack.

Since the Supreme Court struck down key components of the landmark 1965 Voting Rights Act, jurisdictions across the country have been free to enact voter ID laws and miscellaneous limitations to prevent voter fraud—a solution in search of a problem. These laws barely mask a jaundiced scheme to suppress the vote. On a positive note, those who deploy such voter suppression tactics wouldn’t bother if voting didn’t matter anymore.

That possibility is not merely a theoretical concern. A study released in April by researchers at Princeton and Northwestern universities suggests that America most resembles not a democracy, but an oligarchy. According to the study, laws supported by an economic elite (through special interest groups lobbying Congress) are the likeliest to pass, no matter the sentiment of the general public.

That is only exacerbated by another Supreme Court decision, 2009’s Citizens United. That ruling threw out restrictions on political contributions by corporations, unions, and other civil associations, suggesting that money is the fount of free speech. The ruling opened the floodgates to secretive campaign financing, turning back decades of reform aimed at preventing the wealthy and powerful from exerting too great an influence over government policy. In the aftermath of Citizens United, 2014 is projected to become a year awash in as much as $1 billion in “dark money,” campaign contributions whose sources are hidden from public view.

Like Teddy Roosevelt, the church would approve of your decision to exercise your right to make a choice about who will represent you in government—even if, as many complain these days, that choice has been whittled down to the lesser of a few evils. On a philosophical level, the church does not come down one way or another about the specific form government should take, although historically there are many examples of national churches in too cozy relationships with specific regimes.

The church has a default preference for any flavor of government that pursues the common good while protecting individual agencies. It generally resists governments that restrict personal liberty, whether that be in the guise of a socialist absolutism that smothers individual autonomy or a free market authoritarianism that reduces individuals to economic thralldom.

Church leaders have consistently pointed out the benefits and the drawbacks of democracy. When they do, they can be mistaken for facile supporters of the status quo by some or communists in cassocks by others. (Pope Francis recently acknowledged some natural parallels between Marxist dialectics and church teaching, joking they’ve “stolen our flag,” the church’s essential preferential option for the poor.) What is consistent is the church’s urging of Catholics to vigorously participate in the civic life of their local and national communities.

The nation is facing a gamut of difficult challenges: Unemployment and inequality remain high; the fiasco in Ferguson, Missouri has pulled the curtain back on some of the country’s continuing social tensions; and a long, undeclared war with Islamist terrorism has been revived with a new target, the Islamic State. We can continue to complain about the unsatisfactory choices served up by the two parties, but voting is one way we can contribute to fixing what ails us as a nation.

Our politicians will be facing difficult choices about the nation’s future. Will they be up to the job? That will depend partly on what the rest of us do this month.