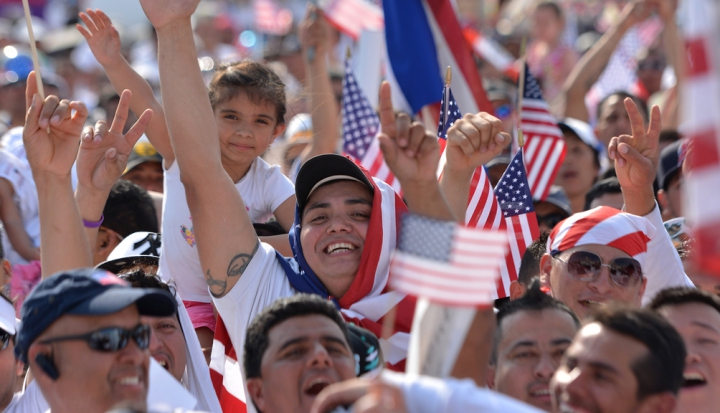 Immigrants may seem like a powerless population, but community organizer Ana Garcia-Ashley believes that together they can be a force for positive change.

What kind of progress is being made on immigration reform, and what more do you think can be done?

I think that some churches are doing a really good job. The Lutheran Church is doing a good job, so are the Unitarian Church and some other denominations. But I think if all the denominations would really coalesce and put pressure on a few people in Congress like [Speaker of the House] John Boehner, it would make a big difference.

There are some pressure points where the church is not really exercising their power. I think that we are escalating that with campaigns like the Fast for Families or “We Belong Together,” which is a women’s movement for immigration reform.

I think what needs to happen is more pressure. You can’t just give in to two or three naysayers just because they are really big political giants. This is David and Goliath right here, in real terms. We need to get John Boehner to answer to the people. Eventually he’s going to have to answer to the people, or he’s going to have to leave his position. We are the ones that need to make that happen.

Gamaliel this year did a really good job of connecting Lent with why immigrants need justice. That’s the kind of work that we need to be doing. We are getting ready to hold another bus tour to some states to raise awareness. In the 16 states where we operate we have been really intentional about praying, fasting, and meeting on this issue. I’ve been out in the pouring rain, passing out postcards to get people to call their congressman to tell them to act.

Of course, all of us also have to call on President Obama and tell him to stop acting, because he’s deporting more than two million people. He is the deporter‑in‑chief, which is a terrible legacy. For the first black president to deport more people of color than any other president in the history, that is just really sad.

It seems like the Catholic Church has a pretty strong position on this issue but they don’t put enough political pressure on our elected officials.

Exactly. They’re not using their political capital, and when you have a church that is so largely immigrant, that doesn’t make any sense.

We, as immigrants, are the ones who are vibrant members of the church in this country. I think we don’t put enough pressure on our priests and our bishops. It is a cultural thing about immigrants in the Catholic Church—we just listen to our leaders and we don’t question them. Padrecito sabe todo, as we say, the priest knows everything. They need more people like me, who have somehow overcome that.

How can we organize the immigrant population around this issue?

It starts with how we think about immigrants. I was fortunate, or maybe unfortunate, to be stuck at an airport once with my mentor, Shel Trapp, for seven hours. He and I were going to Brown University to do a panel discussion, and we got stuck in a blizzard at the O’Hare Airport. We ended up fighting so loud that they called security on us.

We were arguing about his opposition to organizing immigrants. “They don’t have power,” he said. “You are delusional, you’re romanticizing the issue, that’s not where your power base is.” You have to be tenacious to be see your mentor call you stupid in a crowded airport. He was yelling so loud that they ultimately said, “You guys have to move, you’re disturbing everybody at the terminal.”

The point is that immigrants were not a population that was seen as having power, or at least that’s how some of my mentors felt.

Why did they feel that way?

I think that back in the day—and Trapp would say this— the belief was that you need to organize people who belong to institutions. We were more in the business of disorganizing institutions to reorganize them in a powerful way, as opposed to organizing the disorganized into cohesive organizations. If you’re trying to build power, it seems like an oxymoron to go and look for the most powerless people.

But with immigrants, we had to go find people that were totally disconnected from any kind of institutions. Some were part of Catholic churches, but in almost an invisible way. I’m a fourth generation Catholic, and I know that a Spanish Mass is usually at an odd hour. The English Masses don’t interact with the Spanish Mass. Some churches have bilingual Mass, but they integrate people who are making it in the community, not the immigrants that are struggling. So even if immigrants were part of the church, they were invisible.

I think Trapp also felt that immigration was not a winning issue. Community organizing was based on short-term winning. I went to the Industrial Areas Foundation training and it was all about picking a target, moving the issue, and winning. Six months was considered long-term for them. It’s not that simple; we’ve been working on immigration for 20 years.

I don’t think you could’ve gotten community organizers to agree back in the day if you said, “Let’s move into a coalition with others—with denominations and unions—and fight and fight, but it might take 20 years.” But you can build an organization and sustain it that way, and now we show that we can. We have organizations in the Gamaliel network that have been around for 20, 25 years. People like Shel Trapp and Saul Alinsky never envisioned having organizations that would last that long.

How has today’s political polarization impacted your efforts?

I think that the polarization stays pretty high up. Where I work, with congregations and communities, we don’t feel that sense of polarization so much. I think polarization happens when you get to the decision‑makers, like who is going to decide whether you get a grant or not. I think that that is where it impacts us, at a higher level.

When it comes to politics, I think that there are a lot of misguided people. Like Rep. Paul Ryan—I feel he is still a work in progress. He’s my congressman and I’ve met with him. I don’t think he’s a bad person. I just don’t think he’s arrived at what he really believes yet. He needs some age and wisdom.

When you talk to him about immigration he is sometimes very on target about what needs to happen in reform. I believe that with age he will become more balanced. He’ll become more like a John McCain, somebody who believes in negotiating. We had a McCain‑Kennedy Bill in the Senate on immigration reform that we could have moved. That was an example of compromise, but the bill was never voted on.

Politics have become so disjointed. We have become so disengaged as a people, which is why Gamaliel has been doing voter registration, education, and activation in all our congregations. We’re pretty successful at getting churches on board and becoming a real political force as a people of faith.

Part of being a person of faith is engaging in democracy. Otherwise, how can you believe that you have faith if you’re not engaged in making sure that it’s lived somewhere?

This is a web-only sidebar that accompanies the interview “Strength in numbers: The power of community organizing” which appeared in the July 2014 issue of U.S. Catholic (Vol. 79, No. 7, pages 24-28).