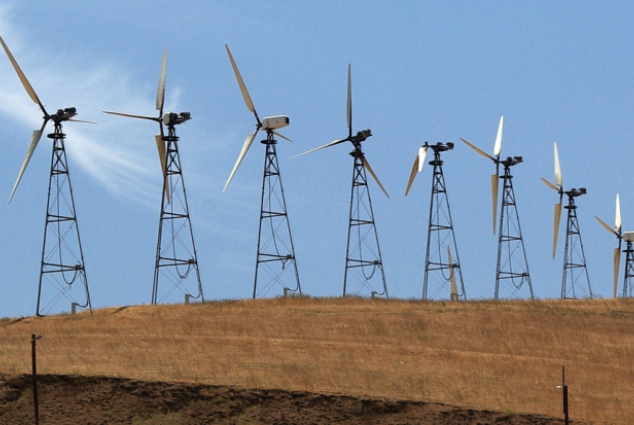 Ending our reliance on fossil fuels might mean digging deeper to find alternative solutions to our global energy crisis.

In the various houses I’ve lived in over the years, when I had to plane or sand a door to keep it from sticking I’d start, logically enough, by separating the door from the jamb by removing the hinge pins. After the shave, getting the door back on the hinges was always a challenge, especially with the awkward, heavy door. I’d lift the door vertically to align the two hinge halves and then try to hold it steadily while reaching to replace the hinge pin.

Then someone showed me a very simple trick: Lay a crowbar on the floor close to the hinge side of the doorjamb, place the bottom edge of the door on top of the crowbar, and press down on the crowbar with your foot to raise the door to the level of the hinges, push the hinge halves together, and drop in the pin. Voilà! All the years of cursing heavy doors and trying to align those hinges—with a simple lever, the back strain, pinched fingers, and the cursing all but disappeared.

This little metaphor came to me recently while following the debate on hydraulic fracturing, or “fracking,” the process of extracting natural gas by drilling a well vertically and then horizontally deep into the earth. Into the boreholes go enormous amounts of pressurized water, sand, and chemicals to drive out natural gas trapped in shale rock. The jury is still out on whether this can be done safely, and the long-term dangers are hard to predict. We may not know, for example, if the chemically tainted water will remain underground or begin to seep into water tables and filter into rivers and streams.

There are other, more immediate problems surfacing as well. An enormous number of tanker trucks and other vehicles are rumbling down—and crumbling—country roads that are not designed to handle the volume of traffic. The exact composition of the chemicals used in the fracking process (many are “trade secrets”) is unknown, as is the safety of those chemicals, especially to human health. Furthermore, no one has decided who is held responsible if something does go wrong. Finally, we simply do not know the degree of public awareness about the socioeconomic short- and long-term benefits and costs of the processes to families, communities, and states.

The problem of climate change is well understood, even if the outcomes are not entirely certain. Fossil fuel consumption is generating greenhouse gas pollution—that is, more greenhouse gases beyond what naturally occurs to keep the planet in balance. We have to immediately slow and quickly reverse this activity or we’ll likely cook the planet and generate enormous hardship for ourselves, especially for the poor and vulnerable. So what’s the tool, what’s the lever that we need to get the job done smarter and with less pain?

Some, including President Obama, think that one important tool is natural gas because it burns cleaner. And extracting it through fracking is all the rage in many places around the country including, and maybe especially, in Pennsylvania.

Even if this method of pulling natural gas out of the ground can be made safe, it seems that the fuel and the process are, in many ways, the same old approach. What we really need are new, but very attainable, tools. It’s clear we cannot keep burning fossil fuels—even relatively clean ones like natural gas—and save the planet from harmful climate change.

Proponents of this process tout that natural gas is a bridge fuel because it does, in fact, put far less carbon dioxide into the atmosphere than either coal or oil. But maybe this is just perpetuating the myth of “clean” fossil fuels. If we truly put as much time and money into exploring and developing cleaner alternatives to fossil fuel energy, could we dramatically reduce our dependency on them?

Natural gas is still a fossil fuel and, while it is definitely cleaner than coal, it still contributes to greenhouse gas pollution. So here I offer some thoughts in the hope that they contribute to an urgent and ongoing dialogue about how our society—and especially people of faith—power our lives and our economy.

Clearly there are enormous economic interests at stake, including powerful companies with out-sized political influence. Our current energy infrastructure is designed for a fossil fuel energy system: large-scale energy extraction and energy delivery; the machinery to dig and drill; the pipelines, trains, and trucks delivering these fuels. The fuels themselves are very, very good sources of energy, as they produce significant amounts of energy per unit weight. There is a reason that fossil fuels account for 80 percent of global energy needs.

So let’s concede that we still need fossil fuels or our economy will collapse. But there are other tools in the toolbox that, with a level playing field, could quickly reduce the amount of carbon dioxide we’re dumping into the atmosphere. If we gave these alternatives the same attention we’ve given to the fossil fuel industry, we could see enormous benefits including cleaner air and water, more jobs—or at least different jobs from those employed by the extractive industries—more ingenuity and creativity, and better overall health for humans, the planet, and future generations.

There are at least three important tools that we must consider as we quickly wean ourselves off fossil fuels including “cleaner” ones such as natural gas. The first, least costly, and most logical of all the tools is energy conservation. We can use a lot less energy in nearly every area of our lives: our homes, our workplaces, our transportation choices, and even what we eat. If every home sealed up leaky doors and windows, lowered the thermostat in the winter, and raised it in the summer, we could make a serious dent in the 20 percent of U.S. energy consumption dedicated to heating and cooling our homes.

Let’s replace the old car, when the time comes, with a more efficient one. Better yet, dust off that bike in the basement, pump up the tires and oil the chain, and take it to the bus or train to get to work.

Buy local foods or grow some of your own food. Most of our groceries have already traveled an average of 1,500 miles before we bring them home.

Think before you buy. Our economy is driven by consumption, and so I share a well-worn fact: If everyone on the planet consumed to the degree that Americans do, we would need the natural resources of three additional Earths to sustain everyone.

The second major tool in the toolbox is renewable energy. The United States has taken great strides in this area, but we must do more, and quickly. Last year jobs in the solar industries grew by 20 percent, and 90 percent of Americans believe that we should be using more solar power. In 2012 the Misleh family proudly embraced solar with an array on our own home that is now producing about 80 percent of our annual electric energy needs. Wind and geothermal energy are also growing and show enormous promise. In many places around the world, the large electrical projects (such as hydroelectric dams and large coal-burning power plants) are taking a backseat to simple windmills or solar arrays.

The third tool in the toolbox is that of attitude. We must adopt, as Pope Francis and St. Francis of Assisi have shown us, an attitude of simplicity that reflects in our own lives the imperatives of sharing what we have, concern for the poor, and care for creation. This attitude is born out of deep prayer, honest self-assessment, personal and communal actions, and a willingness to be a voice for those on the margins who are most impacted by environmental harm.

This particular tool can be put to use today by joining a national campaign of other committed Catholics who have signed the St. Francis Pledge to Care for Creation and the Poor. More than 10,000 Catholic individuals, families, parishes, and other institutions have committed to the pledge’s five elements: pray, learn, assess, act, and advocate.

The final tool that we must all embrace combines love, patience, and dialogue. My worst days are when I feel that our nation has an inability to have civil dialogue about these important matters. The “you’re either with me or against me, winner take all” attitude by pundits, politicians, and even among ourselves—people within the same faith community—must give way to respectful dialogue, openness to seeing things differently, and collaboration to find common solutions.

So let’s have the courage to embrace all of these tools for the sake of the planet and our children and grandchildren. We know what we must do and we have the resources today to do it. There is really no good reason to continue the reliance on fossil fuels and their dangerous effects.

1. On a national level, we should be investing in:

2. I think that climate change is a problem that requires an urgent response.

3. The church’s attitude toward fracking should be:

53% – To vocally oppose fracking because it negatively affects our environment and the people who live in that environment.
20% – To stay out of the discussion, because the church has other concerns.
6% – To do nothing, because there isn’t enough information on fracking.
3% – To vocally endorse fracking, because we value the right to work and the jobs that fracking creates.
18% – Other

Representative of “other”:
“Lead an open dialogue. There are Catholics on both sides of this issue with valid reasons. We need a rational, faithful discussion.”

4. Fracking is necessary because it will help end our dependence on foreign oil.

5. I think that right now, the creation of jobs outweighs any potential environmental problems with fracking.

6. I am doing my part for energy conservation by:

59% – Keeping my thermostat lower in winter and higher in summer.
50% – Buying local food and/or growing some of my own.
44% – Insulating my house.
19% – Using my bike and public transportation whenever possible.
8% – Installing solar panels.
16% – Other

Representative of “other”:
“Recycling, composting, not using chemical herbicides and pesticides, and advocating for more environmentally friendly policies.”

7. I live in an area of the country that is affected by fracking.

Results are based on survey responses from 165 USCatholic.org visitors.