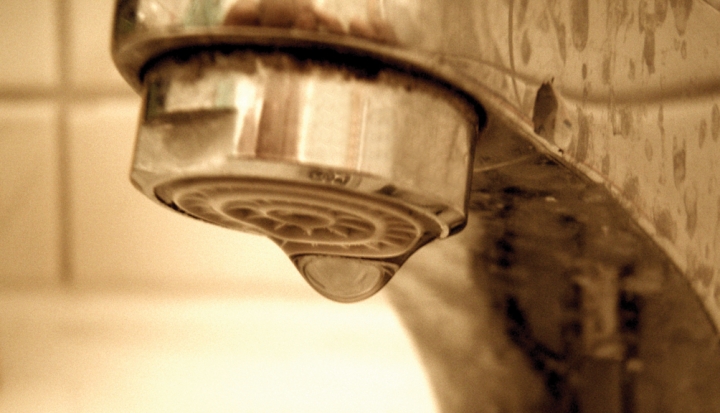 Some of us take for granted the most precious resource of all. Lack of water harms families not only in the Third World, but also here at home.

It’s 9 a.m. in the high desert of rural New Mexico, and the heat is already oppressive. People begin their day as you might expect: grabbing backpacks and heading to school, feeding goats and watering horses, patching holes in fences or crawling under cars to make small repairs. There is plenty to do.

In the distance a middle-aged woman ambles up to her porch for a break. She reaches over to a 20-gallon blue barrel, pries off the plastic covering coated in dust, and plunges her arm—up to the shoulder—into the round opening, scraping the bottom with a ceramic coffee mug. It’s time for a drink of water.

Most families in Smith Lake, New Mexico don’t have a tap or a toilet at home. Life without clean water looks much the same as it did in 1868, when Navajo families were first settled on this reservation, the nation’s largest. Infrastructure didn’t develop naturally here, and pervasive poverty has kept these homes off the grid for generations.

In Smith Lake, the finite amount of clean water a person can collect every month determines everything. What they can’t pull off a local water truck they’ll haul from nearby ponds or livestock troughs. More than 40 percent of Navajo families live this way—tens of thousands of Americans.

Brenda Johnson watches the water delivery truck make slow progress up her hill as she places the mug at her feet. She whistles, and soon a parade of children emerge from the brown, thinly painted trailer, each holding a cup, can, or bucket. The containers are lovingly arranged on the porch like a proud collection of trophies. The oldest of the girls runs out to greet Darlene Arviso—the Water Lady—and her yellow tanker.

Brenda shouts a warm greeting to Darlene in Diné as Darlene unfastens a clear plastic hose and opens the spigot. Water fills the first bucket. Not a drop is wasted as the hose passes to the next container.

Before Darlene finishes filling the second container (an empty detergent bottle), Brenda disappears into the house with her mug. She pours the clean water—again, carefully—into a small saucepan and sets it to boil over a gas jet. She begins to form tamales by hand, placing each husk into a foil-lined knapsack fixed with a small vendor’s license and her picture.

Brenda explains to Darlene that she’ll hitchhike to town and sell the tamales to buy gas. She hopes she’ll have just enough fuel to drive her small car to Albuquerque. Her husband, the only adult male in the household, has been in the hospital there for six months receiving treatment for a bacterial infection. His stay has been two weeks longer than necessary, since without clean water Brenda hasn’t been able to make and sell tamales, buy gas, and pick him up. When he returns, the 10-person household will have to work harder than ever to stretch the 400 gallons of clean water they’ve just received over the next 30 days. Darlene’s water truck serves 250 families from a well 70 miles away. She can visit each house only about once a month.

Water is everything. Brenda is constantly, quietly living this lesson that many Americans never have to learn. Clean water is the engine that drives every decision she makes. It determines the course of her day and the trajectory of her life.

Globally, more than 883 million people live in water poverty. While the average American uses up to 150 gallons a day to cook, clean, drink, and bathe, Brenda uses just under seven. In places like sub-Saharan Africa, many use less than two. Without reliable access to clean water, nearly 1 in 7 humans are forced to collect water from open sources like streams or ponds, causing them to sicken or die. At any given moment, 80 percent of the world’s hospital beds are filled with people suffering from waterborne illnesses. Dirty water kills more than 4,500 children a day.

Of course, access to water determines more than health. For families like Brenda’s, it determines access to the economy, time for education, and leisure. Because water collection is usually left to women and girls, access to water also determines gender equity and risk of sexual violence. But if water poverty creates a host of related problems, stifling human growth at every level, the opposite is also true. Communities empowered by access to water make an incredible leap toward happier, healthier lives.

Every human being has a right to the clean water he or she needs to live with dignity. In the words of Pope Benedict XVI, “The use of water—which is regarded as a universal and inalienable right—is related to the growing and urgent needs of those living in poverty, taking into account the fact that limited access to potable water has repercussions on the well-being of an enormous number of people.”

To a first-time visitor, conditions in Smith Lake are unexpected and overwhelming, but water poverty is not uncommon in the United States. About 13 percent of Native American homes lack access to clean water or sanitation. Compare that number to 0.6 percent, the average for non-Native Americans.

Migrant workers and the undocumented are affected, too. In places like Lowndes County, Alabama, anti-immigration laws are used to cut off water service to residents without a valid driver’s license. In California’s Coachella Valley, commercial farm workers are forced to live in squalid tenements with no sanitation service and unreliable access to water. Without recourse to the law for fear of deportation, their living conditions improve slowly, if ever.

There are more than 600,000 homeless men and women in the United States; most cannot rely on daily access to a tap or a toilet. In other parts of the world, the urban poor fare even worse. Since the early 1990s, slum dwellers in Latin America, South Asia, and Africa have suffered through aggressive utility privatization schemes, driving up water prices while degrading access. Private utilities might be better equipped to handle water delivery than local government, but they often lack the mechanisms that protect the poor from service cutoffs.

Each of these related challenges would surprise the average American. When most of us consider water poverty, we imagine the simple homes of the rural poor in places like Uganda. What we don’t imagine are Native reservations, Southern suburbs, African prisons, or leper colonies—communities of people with equal dignity and incredible need, but where attention and funds are rarely directed.

Nor do we consider ourselves, our own need for clean water, and the ways we use (and abuse) it in our own homes. We haven’t learned Brenda’s lesson. And therein lies the problem.

For decades our response to water poverty has been a charitable one. We’ve raised funds and drilled wells, but we haven’t made much progress. Water projects still fail more than 50 percent of the time, dragging the people they were meant to serve back into poverty. Whole communities of men and women who don’t fit neatly into our idea of the “deserving poor” (think of those prisons and reservations) are simply ignored.

As Catholics, the problem of water poverty—and the inadequacy of our response—is undeniably a social justice issue. But what should we be doing differently?

In last year’s interview published in America magazine, Pope Francis described a debilitating lung infection that struck him as a young man. The antibiotic prescribed by his doctor wasn’t enough to save him, so his nurse (an enterprising nun) tripled the dose without authorization, saving his life. Francis’ nurse knew him better than his doctor did; her proximity to Francis and his illness brought a solution into focus. “Reflection, for us, must always start from experience,” the pope said.

Mass market “charity” tends to keep us as cold, analytical outsiders. We separate ourselves into groups: donors versus recipients; haves versus have-nots. But a Christian approach to social justice encourages personal engagement and an understanding of our equality, created (as we are) in the same image and likeness. A charitable disposition in the truest sense requires more of us than our resources. It requires an investment of our attention, our prayers, and our personal choices as well. Our response must be the same as that brave sister’s.

DIGDEEP, a nonprofit organization that works to defend the human right to water, is drilling a new 2,000-foot well in the middle of Smith Lake. Hundreds of American families, churches, and community groups will help to make this work possible. From the new well, Darlene’s water truck, and more like it, will deliver enough clean water to meet international human rights standards. Local spigots will provide access to water in emergencies, and the leadership of community members like Brenda will ensure the project’s long-term sustainability.

I have personally witnessed the failure of some multi-national aid organizations in responding to the needs of the people experiencing water poverty. In fact, it was my experience of a failed water project in Afghanistan that prompted me to start DIGDEEP in the first place. Fortunately, the number of organizations (many of them native-run) taking a new, personal approach to water rights is growing, including such incredibly dedicated local groups like AFRINET in rural Cameroon and St. Bonaventure Indian Mission in Thoreau, New Mexico. Even larger organizations are beginning to reevaluate their values and approach.

DIGDEEP treats people with access to water not as donors, but as equal stakeholders. We challenge individuals to understand the importance of water in their lives, so that they can begin to use that experience to connect with people living in water poverty as equals.

Poverty is an immense problem, but the problem of poverty shouldn’t feel distant or unfamiliar. Brenda has a zip code. You can call her on the phone, send her a letter, even enroll your kids in her local school. It’s time we begin to treat water poverty as our problem, by understanding and defending a human right we all have in common. When we make the decision to start, we won’t have far to go.

To learn more about the work DIGDEEP is doing, watch this video:

George McGraw is the founder and executive director of the nonprofit organization DIGDEEP. To learn more about DIGDEEP and its Navajo Water Project, visit www.digdeepwater.org.