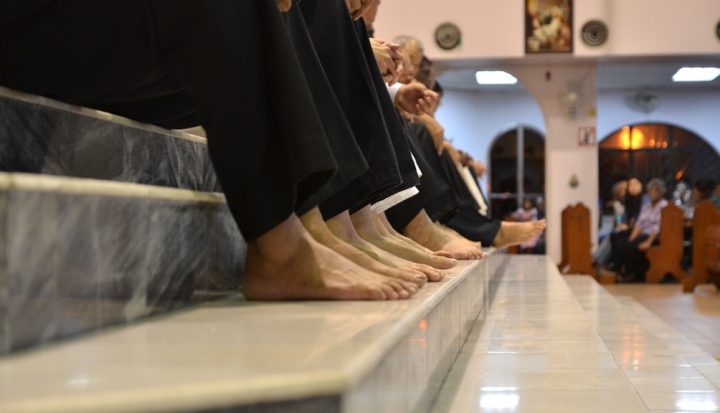 In 1955, Pius XII reformed the liturgy to make foot washing part of the Holy Thursday Mass. Since the 14th century, it had been practiced in a separate liturgy. Then last year, the newly elected Pope Francis decided to celebrate Holy Thursday by washing the feet of inmates—including women, Muslims, and Orthodox Christians—at a Roman juvenile detention center, causing some to fret that the pope set a questionable example. According to Vatican spokesman Father Federico Lombardi, Francis took into account “the real situation, the community where one celebrates.”

In the 1980s, the U.S. Conference of Catholic Bishops’ Committee on the Liturgy stated it is customary for women to participate in the washing of feet. The committee was writing in response to questions about the language in the Sacramentary’s rubric for Holy Thursday that only refers to “selected men” (viri selecti).

Confusion surrounding the washing of feet is understandable given that our contemporary rite has its roots in one of the most enigmatic scenes of the New Testament. Only the Gospel of John describes Jesus washing the disciples’ feet. Many biblical scholars think the scene was written later than the rest of the gospel by an unknown author. Some believe it was added to teach John’s audience, a group facing violent opposition both from other followers of Jesus as well as the Roman government, to prepare for martyrdom. Just as Jesus washed his followers’ feet, a prerequisite for entering the Temple, his followers must cleanse themselves spiritually to stand before God.

The early Christian authors Tertullian and Augustine both mention foot washing, and it likely became a liturgical rite between the fifth and seventh centuries. Documents from the Council of Toledo in 694 stated the practice had fallen into disuse in some areas and that it needed to be restored as part of the Holy Thursday celebration.

During the Middle Ages, understanding of the gospel’s foot washing episode changed; the emphasis on ritual cleansing and martyrdom faded, and an emphasis on humility and service emerged. The image of someone powerful doing the work of a slave, stooping to wash the lowest part of the body, resonated in the medieval world where most people spent all day on their feet engaging in hard labor. Foot washing rites spread outside the church, as European monarchs also began washing the feet of their poorest subjects and giving gifts of money, food, and clothing on Holy Thursday. Both the Catholic Mary I and her Protestant sister Elizabeth I washed the feet of poor laywomen during elaborate ceremonies in 16th-century England.

Pope Francis’ actions may have set a new example, but they are following an even older one. Holy Thursday foot washing—of men and women—has been shaped by the needs and beliefs of the Christian community dating back to John’s gospel.

TagsGlad You Asked Lent Liturgy Women in the church