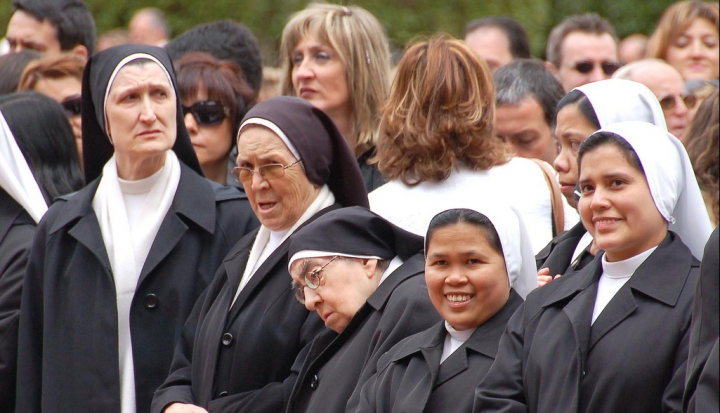 In honor of National Catholic Sisters Week—and may I just point out that the church celebrated an entire Year of the Priest in 2009—I would like to debunk the following five myths about women religious. These are ideas that I hear both Catholics and non-Catholics espouse which are just not true. The truth is usually much more complicated.

I get this one; I really do. Just last month I was looking at family pictures, and there was my aunt, who entered the Congregation of the Humility of Mary in 1952, kneeling at the altar in a beautiful white satin wedding dress as she began her novitiate. It was an archetypal picture of the group of women with whom she entered, looking sincere, virginal, and pretty scared.

It was the theology of the time, and I suppose for some, it made the lifetime commitment more comprehensible. Theology changes; if it doesn’t, it’s dead. It never ceases to amaze me, though, how that particular cultural image persists. In 23 years of teaching high school, countless students (including non-Christians and the unchurched) told me that I was married to Jesus. I’m not. I am perpetually committed to the Benedictine Sisters of Chicago, God, and the church as people of God. While I recognize that some congregations still use this theology, others don’t. It’s a metaphor that works for some people, but it’s not something that is literal or universally embraced.

Priests and deacons receive the sacrament of Holy Orders. They are ordained. Religious brothers and sisters are not. We are part of the laity.

The National Religious Retirement Office’s annual collection has done a tremendous job of educating Catholics about the reality of congregations’ drastically underfunded retirement accounts, and religious are grateful for this and the generosity of so many American parishioners. Still there are a myriad of other ways in which this myth raises its head. When my community made the decision to close the single-gender high school that we had sponsored for 147 years for financial reasons, many people were shocked to learn that the archdiocese did not monetarily assist the school, or the community for that matter. When I tell people that I am looking for a job, often I’m met with a puzzled look and some version of the question, “Well, can’t you just get a job from the church?”

4. Nuns are holier than other people.

Sometimes when I offer to pray for someone or am asked to do so, a person will say, “Oh, good. Your prayers count for more.” No, they don’t.

I have known some very holy nuns. I have also been lucky enough to know some very holy grandpas, married couples, adolescents, and single moms. People who wholeheartedly seek God and use their lives in service of others – whether they know it or not – tend to be pretty holy. That is the life to which Jesus called all of us.

Religious women – as individuals and communities – defy stereotypes. Congregations and communities have unique charisms, the precious ways that they have been called to live out gospel imperatives. Individual sisters live lives shaped by their own gifts, fears, beliefs, biases, and sociohistorical contexts.

Sister Simone Campbell, executive director of Network and the famous Nun on the Bus, and Mother Cecilia Snell, prioress of the Benedictine Sisters of Mary and hit recording artist, are both “nuns in the news.” They don’t sound alike, look alike, or do the same job. But though I have never met either one, I suspect that both are just trying to do their best with what God has given them.

Susan Quaintance, O.S.B., is the formation director for the Benedictine Sisters of Chicago.