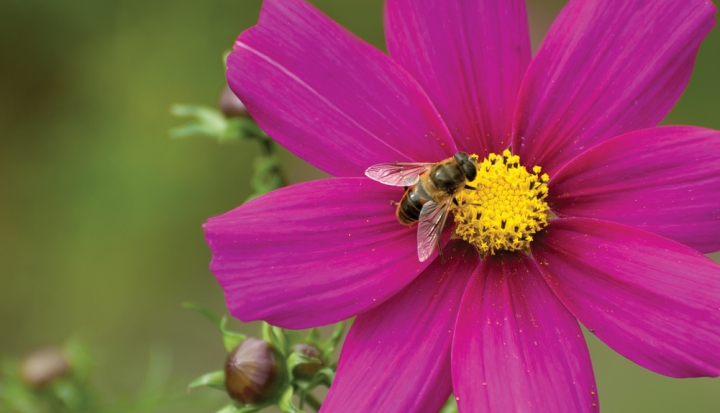 As the bee population declines, we can either listen to the buzz or feel the sting.

For years scientists have been puzzling over a vast die-off of bees in the United States and throughout Europe. After significant drops in recent years, alarms started sounding in 2012 when as much as 50 percent of the bee population in the United States perished. Finding the answer to the bee-pocalypse is important not only to save one of the wondrous sounds of nature—the soothing hum of the honeybee at work—but because bees represent an enormous industry in their own right.

Producing, processing, and retailing honey provides thousands of jobs across the United States and an avocation to thousands of hobbyists. Americans consume about 400 million pounds of honey each year, and the 2012 honey crop was worth more than $289 million. But our very busy bees also serve an even more important purpose in modern agriculture than providing a healthy and tasty sweetener.

While other insects do their share, bees are the world’s greatest plant pollinators. Approximately one third of the total human diet is derived directly or indirectly from insect-pollinated plants. The U.S. Department of Agriculture estimates that 80 percent of insect crop pollination in the United States is accomplished by honeybees. But the bees aren’t busy just for the good of humanity; they pollinate the wild plants that other inhabitants of planet Earth depend upon for sustenance.

So bees are our magnanimous, uncompensated farmhands. Unfortunately, they are being rewarded for their insectarian benevolence with disease and death. Colony Collapse Disorder (CCD) has wiped out an estimated 10 million beehives over the past six years at an estimated monetary loss of $2 billion.

Scientists believe the devastating disorder originates with a parasitical infection among individual bees. When enough bees at a given site become infected, the entire colony can be lost. How bad is the situation? According to some agriculturalists, the United States is one bad winter away from the complete collapse of its bee-reliant growing system.

Various theories have been proposed to explain the bee’s abrupt vulnerability to these infections. Scientists at the University of Maryland and the U.S. Department of Agriculture have determined that a toxic brew of pesticides and fungicides settling on the pollen that bees collect is likely to blame. While it is good news to have finally fixed a point of origin for CCD, the implications of the new research are deeply troubling. There may be no one clear culprit, but rather a complex interaction of multiple chemical interventions farmers have come to rely on to protect their crops.

While Europeans have acted swiftly to limit certain classes of pesticides that are suspected of weakening bee colonies, in the United States there have been no emergency prohibitions to protect the bees. Like addicts who persist in the abuse of drugs which they know are doing them harm, U.S. growers—systemically “addicted” to the pesticides and herbicides which annually douse American farm fields, farmhands, and rural communities—will need to be significantly challenged to break old habits.

The dying of the bees may be the ultimate service that our nearly silent partners in agricultural production can offer us. Bees are our canaries in the farm field, their suffering a warning to us about our disruption of Earth’s natural processes. Saving bees could mean that U.S. farmers will have to make significant changes in a mode of food production that has in recent decades become “normal”; it could also mean saving ourselves. After all, the witches’ brew of pesticides and industrial chemicals that have proven so fatal to the bees is part of the atmospheric backdrop of our daily lives as well.

Could the many odd ailments afflicting humankind today, such as various endocrine system anomalies and failures, depressed fertility, and spiking autism rates, likewise be related to life in the chemical cloud? The bees are trying to tell us something. We may only have a handful of summers left to listen to them.