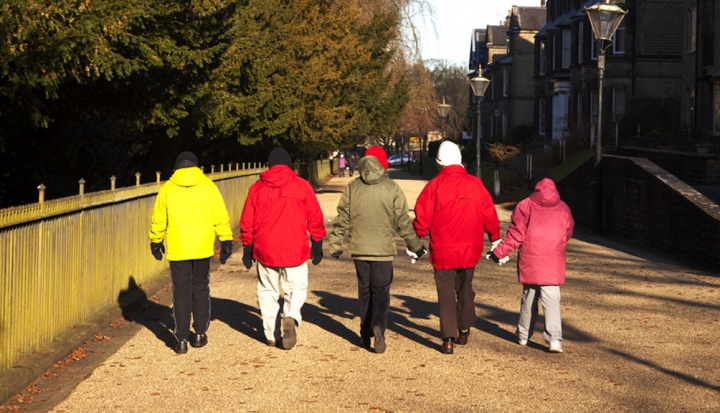 I’ve never liked Norman Rockwell. It is not because of his artistic abilities that I do not like him, but because of his subject matter. I am particularly troubled by his presentation of an idealized family. Remember the scene of the Thanksgiving dinner? Everyone sitting around the table, cheerful faces, waiting for Dad to carve the giant turkey? Where do those people live?

It’s not just Rockwell, though. Media portrayals—like the movies White Christmas and A Christmas Story—generally present families in a picturesque and nostalgic light. I am old enough to remember the remarkable and unrealistic television families like the Cleavers, the Waltons, the Huxtables, and the Simpsons. They were either stylized representations of the perfect family or satirized portrayals of the dysfunctional ones.

This season of celebration is often wrought with a bit of angst, I think. We have very high expectations for ourselves and for the season. Around the holidays, those high expectations can turn into real anxiety, especially when we celebrate with family members we barely know or rarely see.

I know a bit about long lost relatives. I have two mothers: one who gave birth to me, and one who raised me. For nearly half a century, I loved the latter and longed for the former. Then through a strange twist of fate—or more aptly, God’s ever-present hand—I recently met my biological mother and sister. So this Advent, as I reflect on the season anticipating the birth of Jesus, I am intimately aware of origins—and my origins in particular. I’m pestered by questions like: What makes a family a family? What makes the Joseph, Mary, and Jesus triad holy? And what makes them “family”? And how does this “holy family” help me understand my own place within the various families to which I belong?

In this day when hyphenations describe family relationships, step-, foster-, and half- often do more to separate us than connect us. I have found, though, that reflecting on Matthew’s portrayal of Joseph brings me to a better understanding of what makes the family “holy.” It has less to do with the accident of biology and much more to do with the choice to love.

In the Gospel of Matthew, the story begins with the genealogy of Joseph, the husband of Mary, and, as we all know, the stepfather of Jesus (Matt. 1:1-17). According to Matthew, Joseph’s lineage is a bit odd. Foreigners, prostitutes, tricksters, and married women are included in Joseph’s family tree. Some scholars suggest that Matthew’s inclusion of the four women (Tamar, Rahab, Ruth, and Bathsheba) may represent “non-Jews” and thus give the genealogy a more universal tone. I think Matthew recognizes that, as seen in the Old Testament, God often chooses the least likely as an instrument for divine action.

Joseph is not the biological father of Jesus, but he demonstrates that parenthood isn’t solely determined by biology. He chooses to become the legal father of Jesus when he takes Mary into his home (Matt. 1:24-25) and subsequently names the child (Matt. 1:21). By so doing, Jesus becomes Joseph’s son and is therefore heir to Joseph’s lineage. This is how Jesus becomes a son of David.

Of course, this isn’t the first time adoption shows up in the Bible. We can recall that Moses is adopted into the family of Pharaoh in Exodus 2:10. In the New Testament, St. Paul uses the metaphor of adoption to explain the believer’s relationship to God. In Romans we hear: “You have received a spirit of adoption. When we cry, ‘Abba! Father!’ it is that very spirit bearing witness with our spirit that we are children of God” (Rom. 8:15-16).

We hear it again in Galatians: “But when the fullness of time had come, God sent his Son, born of a woman, born under the law, in order to redeem those who were under the law, so that we might receive adoption as children” (Gal. 4:4-5).

Families in the ancient world included biological and adopted members, slaves and freed people, and an assortment of relatives. What most often united these seemingly disparate members was their worship of the family god or gods.

Not so today. What comprises a “family” is a hotly debated topic these days. According to the Census Bureau’s definition: “A family is a group of two people or more (one of whom is the householder) related by birth, marriage, or adoption and residing together.” But Brian Powell, a sociology professor at Indiana University, suggests in his book Counted Out: Same-Sex Relations and Americans’ Definitions of Family (CUPS Services) that many Americans are broadening their definitions of what does or doesn’t constitute a family. The majority still sees the presence of children in the household as the deciding factor. Furthermore, cultural imagination seems to be ever-expanding to include more combinations of people: couples with or without children, a mother and a grandmother raising kids, single parents and their children. The combinations are endless.

When I asked my mother once why she and my father chose to adopt, she responded simply, “We wanted to be a family.” But, as is all too obvious, not all families include two parents. The high rate of divorce is having consequences on the next generation. Several websites address the appropriate etiquette at weddings where the bride’s and/or groom’s parents are divorced and remarried. Whose names are on the invitation, who sits where, and who walks the bride down the aisle have become increasingly difficult questions to answer as “family” structures become more complex.

And some families don’t fit any definitions. A wonderful case in point is found in an article by Spiritan Father Tony Gittins (“In Search of Goodenough Families: Cultural and Religious Perspectives” in Mutuality Matters: Family, Faith, and Just Love, Sheed & Ward). Gittins writes, “There is a variety of evolving family forms and myriad existential families that are atypical or unique. Is it possible that, though they are neither perfect nor complacent, but struggling and surviving, these ‘blended families’ may be repositories of some critical ‘family values,’ and in fact be ‘good enough.’ ”

The term comes from the psychologist D. W. Winnicott, who used the phrase “good enough mother” to describe the parenting function that provides sufficiently to meet the child’s needs. By comparison, the “good enough” family is that unit that is able to sustain and promote the well-being of its members—not necessarily perfectly, but successfully.

In a footnote, Gittins explains that his own “good enough” family consists of his adopted adult daughter, her three adopted children and one biological child, her common-law husband, and her adopted mother, who is not related by marriage or blood to Gittins. I should also mention Gittins is a priest in good standing within his religious congregation, and his daughter’s adopted mother is a religious sister. Unlike most familial arrangements, this unique one was initiated by the adult daughter, who recognized that she needed parents who could help her negotiate her very complicated and difficult life.

This arrangement might not resemble the traditional definition, but as Gittins writes, “It is a ‘good enough family’ in the sense that it struggles, in an explicitly Christian fashion, to address the needs of each of its members and to act justly in the wider world.”

In a way, the early chapters of Matthew describe a “good enough” family. Joseph may not be the biological father of the baby Jesus, but the angel invites him to be the “good enough” father, symbolized by his naming of the child (Matt. 1:24-25).

As we gather with our own renditions of the “good enough” holy family, we can recognize that Jesus—Emmanuel, Son of David—was born of a virgin (Mary) who was betrothed to man (Joseph) who chose to be Jesus’ father. As Mary and Joseph demonstrate, both biology and relationship make the “good enough” family into the holy family.

What makes the holy family holy? Some might say the presence of the divine child Jesus. But I think holy is also an attribute of Mary and of Joseph. Both are given—and both accept—the opportunity to be conduits of divine action and love. Luke and Matthew both paint remarkably similar portraits of God’s invitation to Mary and to Joseph in which both make the choice to become an unconventional, “good enough” family. God holds out the same invitation to us. Are we willing to accept that our own “good enough” families can also be holy?

Sister Laurie Brink, O.P. is a Dominican Sister of Sinsinawa and associate professor of New Testament studies at Catholic Theological Union in Chicago. She most recently contributed to a new edition of Biblical Foundations of Spirituality: Touching a Finger to the Flame (Rowman & Littlefield).