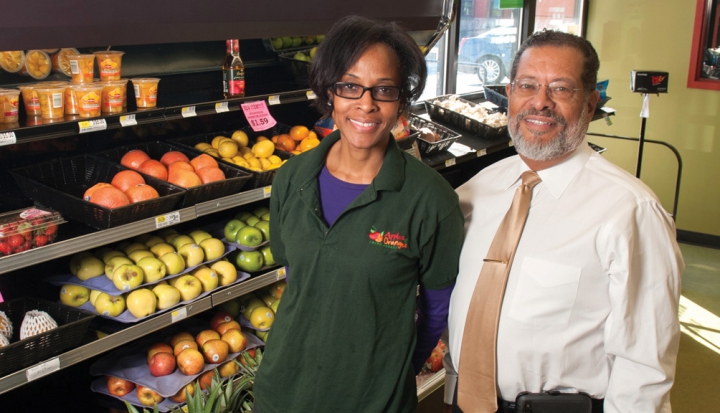 When poor diets caused too many early deaths in an urban community, a solution came from an unlikely source—the local mortician.

As a 61-year-old mortician, Erich March wasn’t interested in joining a food trend. You won’t hear any mentions of Michael Pollan or locavorism from March, even as he beams about Apples & Oranges Fresh Market, the health-oriented grocery store he and his wife, Michele Speaks-March, opened in their East Baltimore neighborhood earlier this year.

Instead, he simply recalls years of living in a community hurting from a lack of access to basic nutrition. It’s “personal experience” that informs his business more than anything else, March says.

Unjust Cause: For 42 years, March was content to ply his trade as a part-time mortician at a funeral home on the North Avenue corridor of East Baltimore, a business he inherited from his parents. He had strong ties to the community he’d grown up in, including being a lifelong member of St. Ann Parish. But over time the causes of death he routinely saw among people in the community disturbed him.

The stories became sadly repetitive: obesity, hypertension, diabetes—telltale signs of a poor diet. The devastating effects of malnutrition on a distressed community are readily apparent at the funeral home, March says. “We see firsthand the effects of the lack of fresh food that culminate in premature death,” he explains.

March says his largely African American neighborhood classifies as a “food desert”—an economically struggling area without places to buy healthy, affordable food. “We have large tracts of land where people who have no public transportation can only walk to the corner store, where they sell things like fried chicken boxes,” he says. “These are high-salt, high-fat foods that, for lack of convenience, become the basis of [residents’ diets].”

March had another ear to the ground thanks to his second job as president of the East North Avenue Community Development Corporation. In conversations with neighborhood residents he would often hear requests for a new supermarket, but he found the large chains had little interest in opening a store there. “None of them wanted to come into our community,” says March.

Faith was also a motivating factor. March recalled lessons learned from attending Catholic elementary and high schools, and from watching his parents give free funeral home services to struggling families. “My faith is a core value that has grounded me and guided me,” says March. And it was clear to him how it could be applied in this situation. “Feeding people is one of the most Christian things you can do,” he says.

Veggie sales: Starting a grocery store in a historically underserved neighborhood wasn’t without its own challenges. “It was a tough road,” says March. Getting the necessary funding was difficult, and the vision took time to catch on. March says most of the supermarkets fled his neighborhood after the race riots of 1968, which left many neighborhood residents dependent on items that he vowed Apples & Oranges wouldn’t carry: sugary sodas, cigarettes, and lottery tickets.

So when the doors first opened on the gleaming 5,600-square-foot retail space, not all customers were quick to reach for wholesome items. “People have been eating the wrong foods for so long. Their palate is not adjusted,” March says.

He recalls a woman with two children who complained to March’s wife that the store’s prices were too high. “My wife looked in her basket and saw frozen dinners, Pop Tarts, prepackaged food,” he says. Speaks-March gently led the woman over to the produce and meat sections, showing her fresh vegetables and poultry that would feed her family for multiple meals. She also gave the woman tips for preparing the food in a simple, healthy way. The mother left the store both relieved and grateful.

March says such cases are as much a part of his store’s mission as the goods they sell. “There is an educational component to our store where we are showing people the advantages of eating healthy, of preparing food at home,” he says. “It’s not only about shopping healthier, but smarter.”

Community building: If the market succeeds, it can be a model for other like-minded businesses in the area. But March says they still rely on other streams of income, such as institutional support and catering. Parishioners from St. Ann’s also lend their support by regularly shopping at the market. “The challenge for us is to make it work,” he says.

No matter the outcome of this venture, March and his wife are unwavering in their commitment to the neighborhood they’ve called home for decades. For the couple, Apples & Oranges is only part of their lifelong investment in the community. “There were times we considered moving, but this is the community that supported us for 67 years,” he says. “This is where we started, this is where we lived for so many years. We’ve decided not to abandon it.”