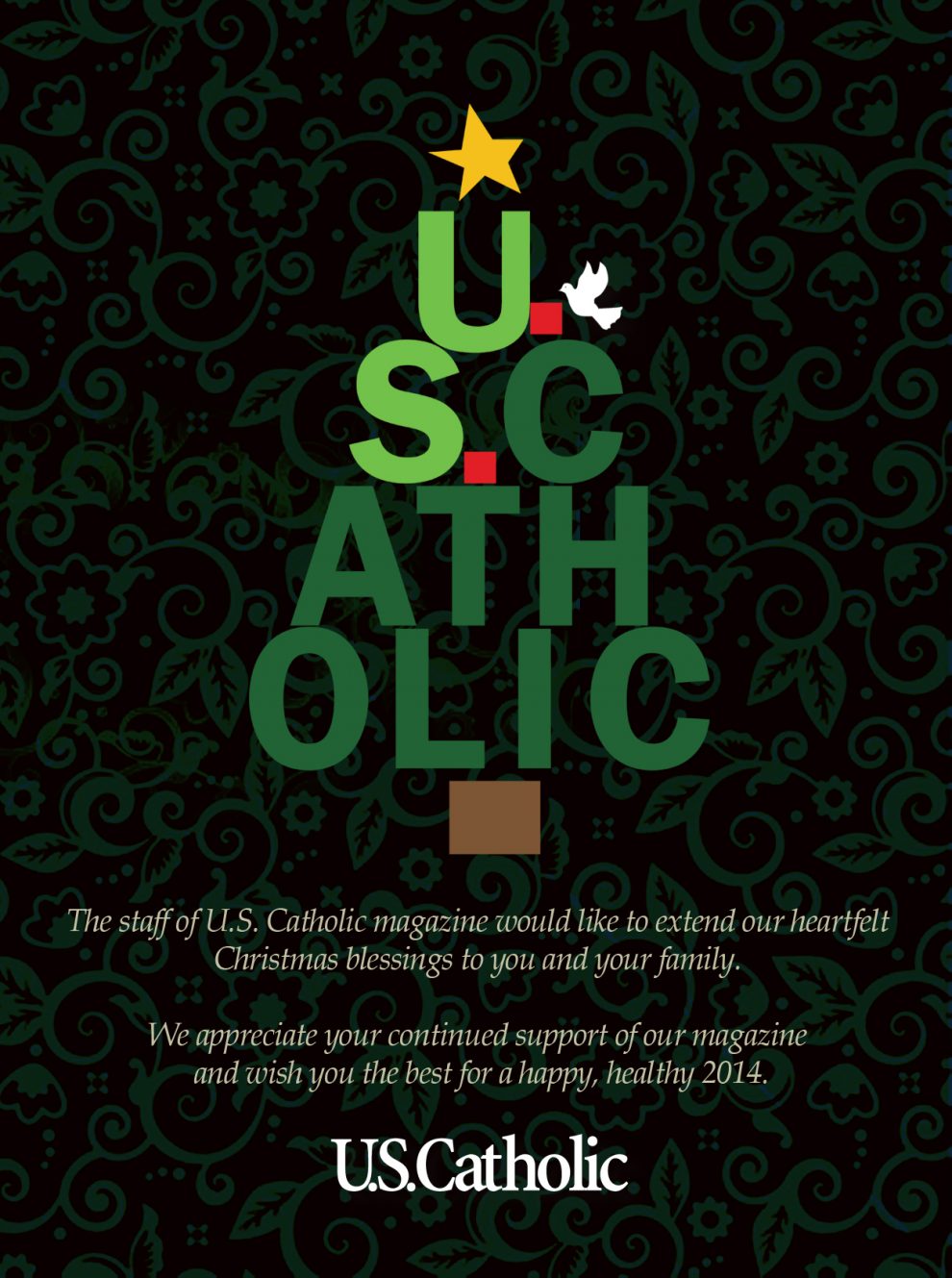 Christmas, as the old song goes, can be “the most wonderful time of the year.” It is a season full of joyful celebrations with family and friends, fond childhood memories, and rich traditions. But let’s face it—the season that is the celebration of Christ’s birth can sometimes also be a bit of a pain. The challenge is balancing the hustle and bustle with the magic and the meaning of the season.

“There was and continues to be something so special about the whole Christmas season, beginning with Advent and going through Epiphany. There is a wonderful joy and expectation throughout the house,” says Helene Kowal Langan of Schoharie, New York, one of more than 200 readers to participate in a U.S. Catholic reader survey on celebrations of Christmases past and present.

But the hectic pace of modern life, coupled with the ever-increasing commercialization of the Christmas holiday, often makes it a challenge to slow down and focus on the reason for the season. Among the survey respondents, 27 percent say they get so busy during the Christmas rush that they have a hard time appreciating Advent, and 18 percent say they even find themselves dreading the run-up to Christmas.

“I start out with the focus, but it gets lost as Christmas gets closer and life gets busier,” says Bernadette Kunkemoeller of Groton, Connecticut. As an elementary school teacher, Kunkemoeller sees that even for children the buildup to the holiday can take its toll. “The kids get more excited as time for vacation and celebrating gets closer—and they get more tired each day.”

Jeanie Lewis of Chicago agrees that the weeks leading up to Christmas can be challenging. “If you don’t actively slow down, you get plowed under during Advent,” says Lewis. “I am only able to appreciate Advent because I make the effort to do so.”

Other readers expressed frustration with the fact that the focus of the Christmas season seems to have shifted more to shopping and decorating, which takes the attention away from Advent and forgets entirely about the days after Christ’s birth.

“I dislike the early start to the Christmas season, when it’s not even the Christmas season on the church calendar,” says Susan D’Entremont of Albany, New York. “But mostly what I hate is that the talk of Christmas disappears on December 26, when that is supposed to be just the beginning.”

That changing focus of the holiday season has been a growing concern among Christians in recent years. Many have decried the fact that Jesus and Mary often take a backseat to Santa and Rudolph, and preparing for Christmas is more associated with shopping bonanzas and lawn decorations than prayerful anticipation of the birth of the Lord.

Readers are more divided on the role that secular icons should play in Catholics’ celebrations of the holiday. To Mary Louise Brady of Winsted, Connecticut, there is a lot of value in those secular traditions—but that doesn’t mean they should stand alone when it comes to Christmas celebrations.

“Santa, reindeer, sleighs, Christmas trains and villages, and candy canes are all secular in nature and beloved by children,” she says. “I see no harm in that as long as it is balanced by the religious and spiritual: Mass, the crèche, the Christmas story, etc.”

Debbie Ginther of Carrollton, Georgia draws the line at introducing those secular symbols into parish celebrations. “Santa and reindeer can have a place just like any good story, but not in church,” argues Ginther. “These days the only place we can tell God’s story is in church and at home, and we need to make the most of it for our children.”

Twenty percent of respondents say that the church is no place for these secular symbols. Readers like Joan Stelmack of McMurray, Pennsylvania object to parishes hosting “Breakfast with Santa” events on church grounds as part of their Christmas preparations. Madonna Burke Quinn of West Hartford, Connecticut agrees that some attempts to blend the secular with the sacred can cross the line.

“There is sometimes a huge lack of taste,” she says. “But the point should be celebration, and the reality of that celebration is marking Jesus alive and among us anew. The Santas and crass commercialism should not take our joy from that celebration. We must really think of how to let the secularism enhance our joy, and not to detract from it.”

Fayetteville, North Carolina resident Beth O’Leary doesn’t see the secular symbols as being quite so problematic—especially when considering their origins. “I think you can take almost all secular traditions back to their roots and find a Catholic root to it,” she says. “Even Santa is St. Nicholas.”

According to Christine Armstrong of Pueblo, Colorado, it all comes down to finding the right balance. “Secular symbols and Catholic traditions can live side by side,” says Armstrong. “A peaceful, snowy scene filled with nature’s beauty can certainly bring to reality the idea that God is present in all of nature. But we go far afield when the only Christmas songs children can sing from beginning to end are ‘Rudolph’ or ‘Frosty,’ or even ‘Grandma Got Run Over by a Reindeer.’ At least one can glean a moral from the story of Rudolph!”

Most readers agree that what keeps them grounded in the spirit of the season are the family and parish traditions that bring out the true meaning of Advent and Christmas. Those include a wide range of practices, from lighting the Advent wreath and connecting with faraway relatives to doing volunteer work and buying gifts for families who otherwise could not afford them.

“With the state of the economy making it impossible for many families to celebrate even a meager Christmas, volunteering at a shelter seems the only way I want to spend the day,” says R. J. Kowalik of Somerville, New Jersey. Other respondents, like Jalna Jones of French Creek, West Virginia, participate in service activities with the rest of their parish community. “We do something special for the local food bank and something for a wider mission, and many of us help with the community Christmas dinner,” Jones says.

For several other survey takers, it is a family tradition rooted in their ethnic background that makes the season meaningful. Christine Laing of Detroit says that her family has a Wigilia meal, an Eastern European tradition, before heading to midnight Mass. Chicago resident Judy Jakubowska says her favorite way to celebrate on Christmas Eve is with the Polish tradition of the oplatki. “[We share] the oplatki wafer with family while exchanging good wishes and asking forgiveness for any wrongdoing during the past year,” she says.

Margot VanEtten of Rochester, New York continues a family practice from her childhood that helps the family make quiet time for prayer during Advent. “The crèche is under the tree, so we turn all the other lights off and just sit in the glow of the lights on the tree, enjoying the silence and gazing at the nativity,” VanEtten explains. “I’ve done this ever since I was a child with my parents.”

For readers like Shirleymae Flake Pajkos of Tucson, Arizona, it is the simple tradition of lighting the Advent candles that brings everyone together. “Our family still gathers on an evening as near Christmas as we can and we light the last candle together,” she says. “We pray together no matter whose home we are visiting. The youngest child blows out that last candle. This is done before gifts are exchanged or eggnog is served.”

Several respondents noted that one of the biggest obstacles to enjoying a prayerful Christmas is obsessing over getting all of the names checked off their shopping list. Some readers choose to make gifts rather than shop for them, while others say they prefer to give more meaningful gifts, like charitable donations in a family member’s name.

Others, like Elaine Hicks of Greeley, Colorado, opt to just limit the number of gifts exchanged with family members. “We give few gifts so we don’t get caught up in the Christmas rush, and we like it this way! We consider our good health, friends, and family the best gifts we could receive,” says Hicks.

Linda Gonzales of Waukesha, Wisconsin likes to give gifts, but she prefers to get her shopping done as early as possible to avoid the frustration of hitting the stores in search of last minute items. Gonzales believes that more Advent activities and focus on what the season is about are the key to a jollier holiday. “If we can truly celebrate Advent, we might just celebrate Christmas a whole lot better,” she says.

As for how to best appreciate the season, Peter Waricka of Atlantic Highlands, New Jersey offers a simple piece of wisdom. “Stay calm,” he says. “And pray often.”

1. I usually display the following in preparation for Christmas:

Representative of “other”:
“I like to decorate a little bit each week, like the Advent wreath, so it builds up.”

2. My favorite Christmas traditions include:

3. I find that Christmastime encourages me to think of others more and myself less.

5. I have participated in an interfaith celebration during the holidays.

6. I usually buy Christmas gifts for:

81% – Only my closest family and friends.
48% – The poor and those who otherwise wouldn’t receive any gifts.
21% – Coworkers and acquaintances.
18% – My extended family members.
4% – Pretty much anyone I can think of to buy something for.
28% – It varies from year to year, depending on my budget.

Results are based on survey responses from 201 USCatholic.org visitors.