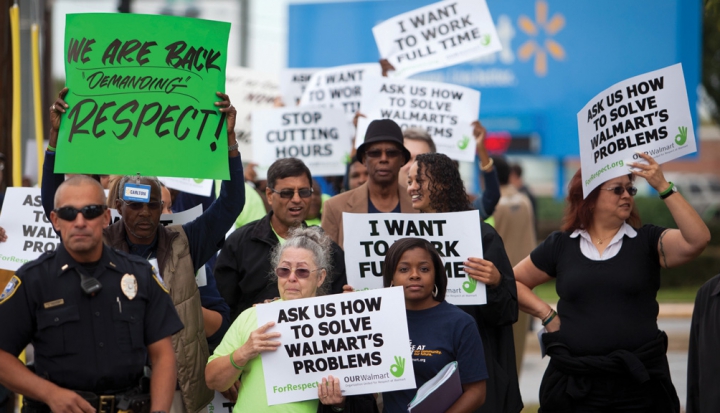 How much do workers have to celebrate this labor day?

The summer of 2013 may go down as one of the most scorching in recorded history. The blazing sun broke records and spirits from Death Valley to the island of Manhattan. Labor Day may not come soon enough this year for many who will be happy to see such a summer end; among them will be many thousands of American laborers. This summer has been a scorcher as well for working people in the United States.

Labor Day has always offered something of a mixed bag for U.S. workers. Its September date was locked in to keep the American acknowledgement of labor several months removed from international labor’s “communistic” May Day observances, even though May Day has its origins in American workers’ fight for the eight-hour workday. Labor Day was hastily introduced nationwide in 1894, intended as a cultural balm to U.S. laborers six days after the bitter and bloody Pullman Strike had collapsed.

Despite a brief period of expansion arising out of the Great Depression and ending in the 1950s, the story of organized labor in United States since then has been one of frustration and decline. Unions now represent less than 7 percent of the nation’s private sector workforce, and poverty and economic uncertainty are at historic levels for a majority of Americans. Labor Day may now be most associated with barbecues and a chance to pick up some bargains at a local Target or Walmart, among the giant U.S. retailers who will celebrate labor’s holiday by clearing surplus summer wear and squeezing big profits out of their minimum or near-minimum wage, nonunion workforce.

Wealth inequality in the United States has grown worse since the 2008 economic crisis devoured 8 million jobs and tossed thousands from their homes in often fraudulent foreclosures. Since 2009, job growth has been steady but short of what is needed to put “discouraged workers” back in the workforce, and jobs that have been created have been low-paying or temporary fills with few benefits.

Despite a presumably pro-labor White House and Senate, efforts to make it easier for unions to organize workers and raise the profoundly diminished national minimum wage have gone nowhere, as has legislation to introduce mandatory sick days and other family-friendly policies. Remarkably, even overtime pay has become a target in Washington.

The Catholic Church has long filled the ranks of America’s union organizers and continues to do so, but the once reliable support of U.S. Catholic bishops has faltered in recent years. Some bishops have offered rhetorical support to persistent campaigns against public-sector unions, as organized labor’s last stronghold became a target of opportunity for forces hostile to unions and collective bargaining rights.

So what’s a laboring person to celebrate this Labor Day? For one thing, nothing brings out the best in people and institutions than the worst of times. Crisis management has energized labor before, and union organizers have suffered and succeeded under far worse circumstances.

Maverick unions are having localized successes and taking nontraditional approaches, such as the “Fight for $15” and OUR Walmart campaigns, which strive to galvanize nonunion workers, suggesting that new thinking and strategies are possible in the pursuit of economic justice for working people.

Traditional connections between labor and religious communities are being restored and reinvigorated, and new networks—such as the coalition of labor, religious, and immigrant communities intent on seeing comprehensive immigration reform—are being created. The energy from that effort will likewise propel a new generation of Catholic union organizers, many from the U.S. Latino community.

They will be men and women solidly grounded in the suffering and struggle of today’s working people, besieged on many sides by forces which seem insurmountable, but discovering anew the power of solidarity.