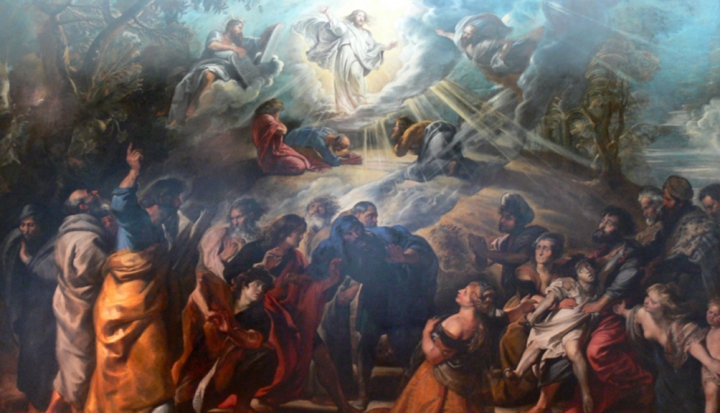 All three synoptic gospels tell the story of the transfiguration of Jesus (Matt. 17:1-13; Mark 9:3-13; Luke 9:28-36)—frequently a sign of the importance of an event from Jesus’ life for the early Christian community. Its origin is debated. Some scholars say the transfiguration episode is really an account of Jesus’ resurrection which was moved to a different part of the gospels. Others think it has its roots in an actual visionary event of some kind.

Wherever it came from, the transfiguration is a highly symbolic story. Jesus took his inner circle of apostles—Peter, James, and John—up a mountain, which in the Bible is a place of revelation, so it was clear something important was about to happen.

These three apostles then saw Jesus as part of another important trio, completed with Moses and Elijah, symbols of Israelite tradition. As if that weren’t spectacular enough, the voice of God itself made an appearance, uttering two thundering phrases: “This is my Son” and “Listen to him.”

Unfortunately, none of the apostles’ reactions showed that they understood what had just happened. First of all, they were half-asleep when the whole thing started—not the last time that would happen at a key moment. They were also terrified to the point of talking nonsense about building shelters for the holy figures. Then on the way down they started an off-topic debate about the resurrection and Elijah.

What the apostles didn’t grasp right away was the significance of the fact that Moses and Elijah were “talking with” Jesus. This sacred conversation identified Jesus with the law and the prophets. It showed how Jesus had the same authority as these two pillars of Israel’s tradition and how that authority came from the same God. To leave no doubt, God’s voice drove home the point with words heard at an earlier affirmation of Jesus’ status, his baptism: “This is my son, the beloved” (Matt. 3:17).

What the apostles also didn’t get at first was that they couldn’t stay on the mountain. One can sympathize with their desire for such a wondrous break from the difficult path of discipleship. Down the mountain and back to that task, however, they had to go.

The Gospel of Luke adds a delicious detail: Moses and Elijah had been speaking with Jesus “of his exodus that he was going to accomplish in Jerusalem.” His exodus? That loaded word points back to the sometimes arduous journey of following Jesus, and that’s what the transfiguration is about. It’s wonderful to find inspiration in a shining vision of Jesus, but the message to the church then and now is that witnessing glory is one thing, following is another. After the vision is over, you look up and see, as the apostles did, “Jesus only,” and you realize that, to get to the further glory of eternal life, you have to follow him to the cross.