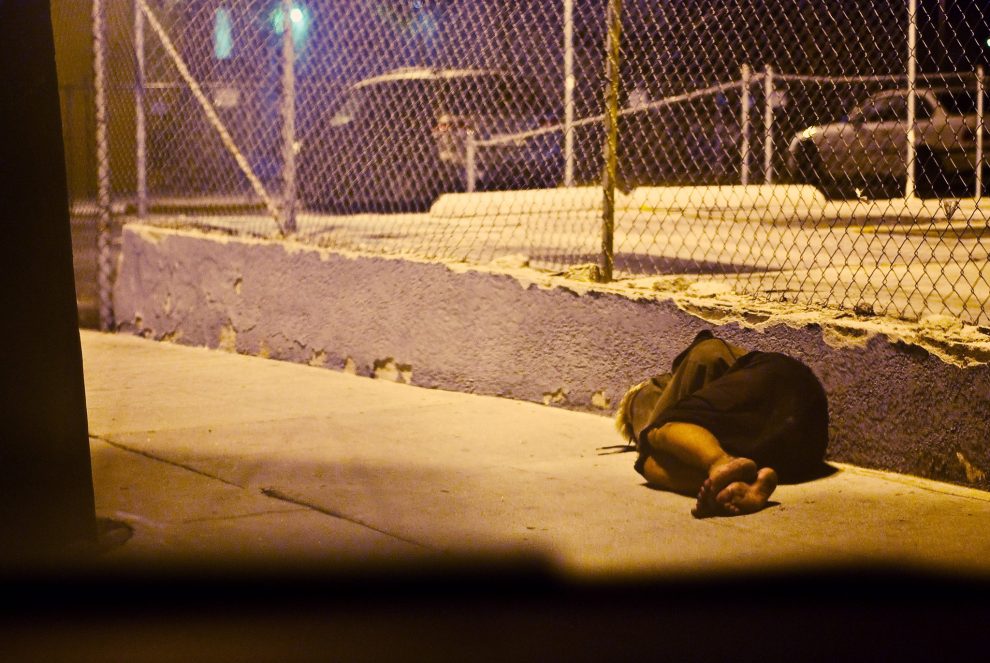 Spending a night sleeping outside shouldn’t lead to a criminal record.

My first night of homelessness was spent sleeping outside on the bank of the Sacramento River. The wind and the proximity to the water made it a bit colder than expected for a summer evening. I felt vulnerable as a woman out alone all night, and I was frightened. Anxiety kept me awake until after midnight, at which time I heard gunshots coming from nearby. A moment of terror, then the thought, “They aren’t here for me,” and I soon fell asleep.

I remained homeless through many hot summers and cold winters, as shelters were always full. My usual routine included finding a place later in the evening to lay out my tarp and sleeping bag. I would get up fairly early, do a quick cleanup to make sure I had left the area better than I had found it, pack up my cart, and be about my business for the day. Sometimes a police officer would find me in a state of what is termed “camping” by the city’s anti-camping ordinance.

Sacramento first enacted an anti-camping ordinance in 1987, not coincidentally following radical reductions in Housing and Urban Development (HUD) funding for affordable housing, which resulted in skyrocketing homeless populations throughout the United States. Sacramento’s current anti-camping ordinance makes it a misdemeanor for anyone to “camp, occupy camp facilities, or use camping paraphernalia” or to “store personal property” outdoors. In the ordinance we find that “camp” has the obvious connotation of pitching a tent and setting up a camp, but it gets to the real target of this law by stating “to live temporarily in a camp facility or outdoors.” Living outdoors or in a motor vehicle—don’t do it! Storage of property can entail merely setting a backpack or sleeping bag for several minutes on the ground or sidewalk. The law does allow one to camp on private property with the owner’s permission but not for more than one night, prohibiting even your children from having a campout in the backyard for the whole weekend.

I only ever received a few citations, but in all encounters I had with the police the officer made sure I left the area. Sometimes the officers were polite, sometimes they were rude, but always they added, “It’s against the law.” As if I didn’t know. As if I could do something about it. The hardships and insecurity of homelessness couldn’t dampen my spirit as much as the humiliation that my city hated me. They must have hated me, since I was denied shelter and yet forbidden to live without shelter.

Though the purpose of this ordinance used to say something about public nuisances—referring to homeless people—it was thankfully changed, instead citing sidewalk obstructions and the need to “protect the health, safety, and public welfare of the community.” This never assumes that a homeless person might be a part of the community, that homeless and nonhomeless alike might be best protected with more public restrooms and places where homeless people can set up a tent, at the very least. I doubt my city’s sincerity, since they would not allow advocates to provide Porta Potties for homeless campers, saying it would “encourage homelessness.”

I contend that the true purpose of the camping and other similar ordinances is to make it easier for communities to exclude whom they want to exclude, since you will never see the ban against storage of property enforced upon a shopper who sets their packages down on the sidewalk while they wait for a taxi.

These measures to exclude homeless people have spread from city to city. Some communities have passed ordinances against sitting or lying down in business districts. A growing number of cities are making laws against sharing food without a permit, often with high permit fees. Laws against panhandling crop up, occasionally overturned because of our constitutional right to free speech, but often upheld due to place and time restrictions.

As a country we are not proud of the history of laws we have had that excluded whole groups of people, such as Jim Crow laws that ensured segregation of black people or the anti-Okie laws that prohibited poor people from entering California during the Depression era. Now we have what is almost proudly called “qualify of life” laws, which fall under the “broken windows” philosophy that when broken windows are left unrepaired, crime and poverty migrate to the area and degrade property values. These laws target homeless people, as if they can be compared to broken windows. Homeless people are criminalized because of their “unsightliness,” obstructing business districts from appearing freer of poverty than they actually are.

It is only understandable that the average resident or civic leader would desire that homeless people were not visible in their communities. But this very visibility is evidence that criminalizing homeless people does nothing toward a solution. In fact, the opposite is true. A person who gets cited for what I like to call “an act of living crime” ends up with a criminal record from the citation and possibly an arrest record resulting from failure to pay the fine, thereby lessening their chances to qualify for housing or employment. Homeless people are forced to move from one place only to reappear in an equally illegal and unwelcoming location.

Many people are unsympathetic because they think homeless people are drug addicts or lazy, or that they chose to be homeless. However, if they all chose to be homeless there wouldn’t be long lines and lists of people waiting to get into shelters and housing programs. Even if a person admits they have chosen to be homeless, do they actually prefer living this rough life, or have they just lost hope? I admit that you may find some unsavory and maybe even dangerous people living on the streets. But you may also find some unsavory and dangerous people living in mansions and apartments, yet we wouldn’t consider making it illegal to live in apartments.

Though criminalization measures are rarely overturned, a few cities are allowing homeless people to live legally in campgrounds. Nevada City, California is experimenting with issuing camping permits to homeless residents. Rhode Island recently passed a Homeless Bill of Rights which includes equal rights protections for homeless people and has inspired other states to start their own statewide laws. Assemblyman Tom Ammiano introduced the Homeless Person’s Bill of Rights and Fairness Act, AB5, into the California legislature in December 2012, which included protecting homeless people’s right to sleep and to lie down without blocking sidewalks. Sadly, AB5 was recently killed in the Appropriations Committee and will have to be reintroduced.

One role model in the work to protect people’s rights is Mercy Sister Libby Fernandez, the executive director of Sacramento Loaves & Fishes, a four-acre multi-services complex that provides survival assistance to an average of 650 homeless guests daily. She has also been a part of most local efforts to decriminalize homelessness, if she hasn’t initiated them herself. She has joined the fight for a safe ground for homeless people, camped alongside other homeless people in defiance of the camping ordinance and threat of arrest, and used her position as a prominent community member to defend homeless rights.

Catholic individuals, parishes, and organizations are well known for taking on projects that benefit homeless people, mostly by serving meals and providing shelter. This work should continue, of course, but we cannot ignore the immediate harm inflicted upon our homeless neighbors by not allowing them the legal right to survive while they wait for shelter and housing to become available.

We need to treat those we find living outdoors as people, not as broken windows. If we don’t want people sleeping in front of businesses, we should provide places where they can sleep and have access to sanitation, water, and garbage service—at the very least. We need dialogue, including with homeless people.

I remained homeless for seven years until I qualified for a Section 8 housing subsidy and was able to rent an apartment. What got me off the streets were not laws forbidding me to be there but an opportunity to get back into housing. When we finally decriminalize homelessness, we can then get down to the real work of ending homelessness, wholeheartedly.

1. If my city were passing legislation that would prohibit camping, I would:

2. Business owners have every right to maintain a clean and safe area, even if that means keeping the homeless out of sight.

Representative of “other”:
“Business owners need to participate in finding solutions to end homelessness.”

3. We need to have some rules about where homeless people can sleep for consideration of public health and safety.

Representative of “other”:
“Yes, provided the consideration of public health and safety includes the portion of the public who are homeless.”

4. Keeping homelessness visible would help inspire people to work to end it.

Representative of “other”:
“It also inspires some people to work harder to hide it.”

5. The presence of homeless people has discouraged me from entering a business.

6.  Preventing the homeless from sleeping outside private businesses is fine so long as the city designates other areas where camping is allowed.

7. If my parish offered our church pews or our parish hall as a place for the homeless to sleep at night, I would:

94% – Support the idea without reservation.
14% – Be nervous about possibly unstable people being so close to the children of our parish.
7% – Feel that a government agency should take responsibility for this, not a church.
4% – Fight against the plan.
1% – Other

This article appeared in the August 2013 issue of U.S. Catholic (Vol. 78, No. 8, pages 12-15). It has been updated to reflect the current status of California’s AB5 legislation.

Results are based on survey responses from 137 USCatholic.org visitors.

Paula Lomazzi is the executive director of the Sacramento Homeless Organizing Committee and staff writer for Homeward Street Journal.