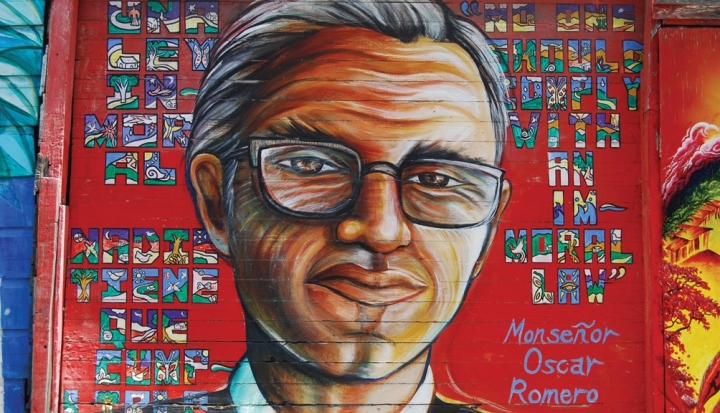 Oscar Romero, now back on the path to sainthood, was called to conversion by ordinary Salvadorans.

Among the welcome news coming on the heels of Pope Francis’ election was an April announcement that the canonization cause of Archbishop Óscar Romero of El Salvador has been, in the words of Italian Msgr. Vincenzo Paglia, who leads the effort, “unblocked.” Romero’s path to official recognition as a martyr—he has long been a “popular” saint among many Catholics—officially commenced way back in 1997, 17 years after his murder by Salvadoran government agents as he led the Eucharist. His association with liberation theology has unfortunately complicated his cause, as both Pope John Paul II and Pope Benedict XVI looked unfavorably on that movement’s connection to Marxism.

Romero’s rehabilitation is no doubt a signal of a change in politics at the Vatican. We might also hope it calls to mind not only Romero’s death but all those lost in El Salvador’s civil war of the 1980s, of which Romero was only one victim. Less than a year after his March 1980 death, three religious sisters—Maura Clarke, Ita Ford, and Dorothy Kazel—along with laywoman and missionary Jean Donovan were raped and murdered in December, suffering the victimization shared by so many women in times of war.

At the end of the decade in 1989, six Jesuit priests, their housekeeper, and her daughter suffered a similar fate on the San Salvador campus of the University of Central America. The priests were killed for their activism in service of the country’s poor; mother and daughter Elba Ramos and Celia Marisela Ramos were, like so many poor working people, caught in the crossfire. By the war’s end in 1992, some 75,000 Salvadorans shared their fate.

I met a woman named Mercedes on a trip to El Salvador soon after the end of the hostilities; she had survived a paramilitary onslaught on her village that left many of its citizens dead and their village razed and burned. For Mercedes and many other Salvadorans, Romero is already an icon of the Christ who accompanied them in their suffering.

It is the stories of Elba and Celia, of Mercedes and her village, and their many sisters, husbands, elders, and children that the canonization of Óscar Romero also ought to be raising up. Those familiar with Romero’s story—made wonderfully accessible by Raul Julia’s portrayal in the film Romero (Paulist)—know he came late to his own involvement in the conflict on the side of the poor. He was at one time uncomfortable with the activism of his friend, Father Rutilio Grande, whose death finally brought Romero himself more actively into the fray.

Telling the story of so many people truthfully will also require remembering the fact that many of the Salvadoran military officers who tortured and killed thousands were trained by the U.S. government at the School of the Americas. Perhaps more difficult will be acknowledging the real source of the conflict in El Salvador and throughout Latin America: the shocking disparity between the few very wealthy people and the masses of peasants who subsisted on almost nothing. At times Catholic bishops lined up with the wealthy, from among whom they were often chosen. But the war in El Salvador required picking sides; when Romero made his own “option for the poor,” joining those laypeople, priests, and theologians who had chosen to seek God’s liberation for the peasantry, he suffered the consequences.

To finally celebrate Romero as an official martyr of the church is to acknowledge that what we call the “preferential option for the poor” is at the very heart of what it means to follow Christ. Faithfulness sometimes means taking sides, no less now in our world in which the gap between the “1 percent” (it was the “2 percent” in El Salvador) and everyone else grows wider day by day. Doing so means remembering not just Romero, but his “companions,” the holy women and men who first called him (and the rest of the church) to conversion. Perhaps, like many other martyrs, his feast will one day be “the Memorial of Óscar Romero and Companions,” with emphasis on the latter.

A reflection for the thirty-first Sunday in Ordinary Time