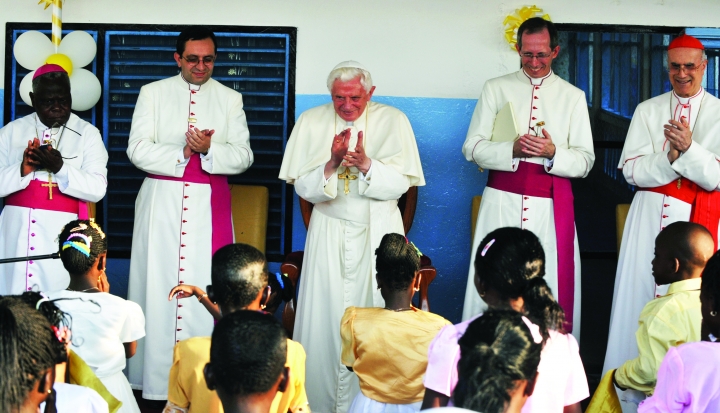 Pope Benedict kept us guessing—especially on matters of social justice.

Pope Benedict XVI’s decision to become the first pope since Celestine V in 1294 to voluntarily step down came as a surprise to many, but it was hardly the first surprise in Benedict’s nearly eight-year reign. The 2005 election of Cardinal Joseph Ratzinger was a bit of a shock in itself. But, while predictably tough on matters theological and doctrinal, the new pope soon exhibited a pastoral side that was as unexpected as his selection. Benedict attended to the church’s tradition of social teaching with a determination and sensitivity that was probably a pleasant surprise for many.

In two encyclicals, Deus Caritas Est (God is Love) in 2005 and Caritas in Veritate (Charity in Truth) in 2009, Benedict reminded Catholics of the perils of indifference to modern human and ecological maladies. In Deus Caritas Est, Benedict details the church’s proper role in works of charity and in seeking social justice, expressing the interconnectedness of justice and charity as the complementary requirements of all people of faith. “Building a just social and civil order, wherein each person receives what is his or her due,” he writes, “is an essential task which every generation must take up anew.”

In Caritas in Veritate, released just as the world awoke to a nightmare of economic disorder that began with the U.S. housing bubble bursting, Benedict cast a critical eye on global capitalism and overconsumption. He warned of the spiritually and materially corrosive effects of economic globalization drained of humanity, unmitigated by charity and solidarity. The encyclical memorably called for restraint and accountability among world financiers and suggested the creation of a new overarching authority to contain their excesses.

“The conviction that the economy must be autonomous, that it must be shielded from ‘influences’ of a moral character, has led man to abuse the economic process in a thoroughly destructive way,” Benedict wrote.

Benedict also elevated the church’s care for creation before the eyes of Catholics worldwide. Dubbed the “green pope,” he frequently spoke of the need for balance in the use of natural resources and the impact of humankind on the environment.

Benedict’s concern with stewardship was really an extension of his vision of a global common good and the requirements of solidarity. He recognized that climate change was not only a historically unique ecological threat, but also a vast injustice being committed by high-consuming cultures against some of the world’s most vulnerable societies.

In 2008 a list of seven new sins requiring repentance included drug taking, abortion, and pedophilia, but in a nod to themes of Benedict’s papacy, it added pollution, genetic engineering, social injustice, and obscene wealth, a moral offense notably linked to care of the earth. Benedict even reached out to agnostics, atheists, and secularists to remind them of the importance of faith in promoting global justice and protecting the common good.

His reign was not without its problems, of course. There were some hard feelings with Muslims and Jews, and gays and lesbians were furious after Benedict said that defending heterosexuality was as crucial to the future of humankind as protecting the rainforests. And justice continued to be a hazy hope for survivors of clerical sexual abuse under Benedict.

Regarding the equality of women within the church there is not much that can be said—literally. Women remain cut off from roles of authority, where their wisdom and talents could have made a significant difference for the better.

There were no doubt many misgivings in April 2005 when Benedict stepped out from the shadows of the doctrinal rottweiler Joseph Ratzinger. But as his papacy comes to a remarkable conclusion, Catholics can remember the pope who quit as a robust guardian of the church’s vibrant tradition of social justice teaching—a tradition continued and extended during his reign.­