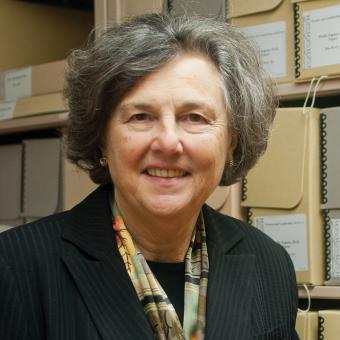 Well after the close of the Second Vatican Council, the U.S. bishops wrote that “an important issue for women is how to have a voice in the governance of the church.” The best way to make that happen is to restore the ancient practice of ordaining women as deacons.

It is painfully obvious throughout the world that the church could benefit from including women in positions of power and authority. Not only would adding women to formal church governance enhance the church’s standing among half the people of God, such a step would bring a wholly different perspective to questions raised and challenged by the gospel.

The vexed question of lay authority in the church often circles around other questions regarding women, who make up the majority of lay ministers and other diocesan employees. The bottom line is that today authority in the church—when interpreted as governance of and within its structures—is always exercised by ordained persons. For the present at least, in the Roman Catholic Church all ordained persons are male.

There are two ways of asking the question: First, can
and should the power of governance be shared with the laity? And second, can and should women be ordained?

1. Can and should the power of governance be shared with the laity?

During the preparation for the 1983 revision of the Code of Canon Law two schools of thought considered the question of lay governance.

The “Roman school” argued that the Second Vatican Council (especially in Lumen Gentium) spoke only about the authority of bishops, not about lay jurisdiction or governance. They demonstrated historical examples of laity exercising jurisdiction, and argued that the council would not want to detour from historical precedents.

The “Munich school,” on the other hand, saw the authority of the church resting solely in the bishops and by extension only in the ordained.

When the canon on exercise of the power of governance came up for revision, discussion turned on whether laypeople could “participate” in governance, as was expressed in two earlier drafts, or whether they could only “cooperate” with it, as the final language in the code puts it. The “strict constructionist” Munich school insisted on the term cooperate, which failed in a 52-9 vote of the plenary preparing the revisions.

But when a smaller committee of experts, including then-Cardinal Joseph Ratzinger, made the final revisions, his wording won the day, and the new code’s Canon 129 affirmed that the ordained are qualified to exercise governance—also called the “power of jurisdiction”—while the laity may only “cooperate.”

What that means is that in today’s Catholic Church women—laypeople all—cannot participate in governance. They may only be consulted.

Many observers believe adding laypeople to formal governance would help forestall even greater financial and sexual scandals than the church has already suffered.

However, as long as the law remains that laypeople may not exercise jurisdiction, women’s only path to formal participation in the governance of the church—outside women’s religious institutes and orders—is ordination.

2. Can and should women be ordained?

At Vatican II at least two bishops suggested ordaining women as deacons. Others have joined the recommendation since then. The church today teaches that it does not possess the authority to ordain women as priests (and, by inference, as bishops), but it has made no contemporary determination regarding women as deacons. So the matter of women deacons remains an open question.

What the church has done, the church can do again. The restoration of the diaconate of women would allow women to be included in formal church governance, maintain the provisions of law that restrict actual governing authority to the ordained, and not disturb the restrictions against women as priests.

Will the church ever include women in the exercise of governance? When he was asked this question in 2006 by a priest of the Diocese of Rome—the diocese he heads as bishop of Rome—Pope Benedict XVI seemed to say that yes, women should be able to exercise governance, although they cannot be priests. Benedict said women “participate” in the governance of the church through their ministries, and he said, “It is proper to ask whether in this ministerial service . . . it is not possible to offer more space, more positions of responsibility to women.”

Lay governance is so rare that it is virtually non-existent. It would seem that the best way to reconcile both Ratzingers—the curial cardinal who ensured that only the ordained could exercise governance and the pope who offered the opinion that women’s “participation” in governance could be extended—is the restoration of women to the order of deacons.

At this point in church history, ordaining women as deacons is the best way to address the key challenge facing the church today: how to best announce the good news that all are made in the image and likeness of God.

Phyllis Zagano is a senior research associate-in-residence and adjunct professor of religion at Hofstra University in Hempstead, New York. She is the author of Women Deacons: Past, Present, Future (Paulist, 2011).