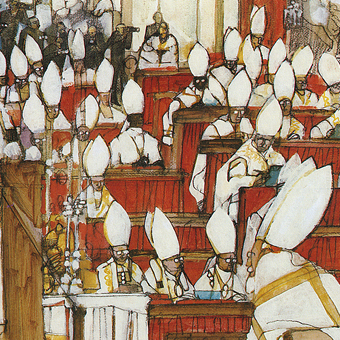 Fifty years after the game-changing Second Vatican Council a new generation helps the church respond to today’s signs of the times. Here, Scott Appleby responds to clericalism and sex abuse.

“In the church all are one in Christ; there is no Greek or Roman, no Jew or Gentile, no male or female”—and no hierarchy of privilege or status or honor conferred by ministerial office or rank alone. All baptized believers immersed in the sacramental life and apostolic works of the Catholic community are to be respected as equal inheritors of the ancient traditions and full participants in the work of redemption, a work accomplished by and through Christ alone. The church, catholic and apostolic, is a graced community of sinners and pilgrims, and those who receive holy orders must never set themselves apart from or above the faithful; to the contrary, the clergy must be subject, like the laity, to the correction and exhortations of all the faithful.

The sexual abuse of children and young adults by a tiny minority of Catholic priests is itself a terrible stain on the institutional church—but the repeated failure of the bishops and other priests to report and remove the perpetrators has magnified and deepened, beyond immediate repair, the erosion of trust and the crisis of faith within the Catholic community.

This moral blindness and outrageous complacency in the face of evil is all the more damning and damaging in that it arises from within a body of Catholic leaders, some of whose most prominent members have been harsh in their judgments of the moral failings of the laity.

Quick to perceive challenges to their authority in the exercise of theological exploration and spiritual creativity, especially among women, they have placed their own “class” of Catholics—the ordained—above recrimination while seldom hesitating to “prune” the church of “dissenters” to their increasingly authoritarian rule. Jealous of their prerogatives as “elites,” they have identified their own often narrow interests with the will of Christ and the good of the church.

This influential subset of the clergy is not the first generation of priests and bishops to mistakenly interpret ordination as a license for ecclesial power over others. Ancient heresies also attempted to establish an elite class within the church, whether by virtue of a presumed “purity” (donatism) or a special knowledge and spiritual status (gnosticism). But today’s clerical elitists preside at a time of institutional peril, when the community of faith desperately needs servants, not princes, to lead and nourish it.

At the heart of the sexual abuse crisis is the sin of clericalism—a constellation of ideas and practices rooted in the conviction that ordination to the priesthood confers a special and privileged status that places the priest above the nonordained baptized by virtue of the sacrament itself, unmoored from its proper setting within the moral life and spiritual pilgrimage of the individual priest.

The status of the priest as alter Christus—another Christ—is today understood as an instant reward of ordination itself rather than grace progressively revealed through years of cultivating the spiritual fruits of the sacrament, among them humility, compassion, and mercy.

How has this malady come to infect the priesthood? We live in a society that seems to celebrate self-indulgence and scorn self-restraint. Many Americans, including many Catholics, are skeptical of obedience to duly constituted authority and other virtues central to the religious life. In some quarters a full-hearted response to the call to holiness arouses suspicion rather than admiration. It is not an easy time to be a priest.

In a well-meaning effort to bolster a priesthood “under siege,” promote vocations, and reinforce fidelity to vows, some very gifted and influential Catholic writers and teachers have fed seminarians and young priests a rich rhetorical feast—e.g., “You are living icons of the eternal priesthood of Jesus Christ.”

Ironically, such rhetoric borrows from the cultural discourse of radical individualism and self-exaltation, which the newly ordained are meant to confront, not replicate. Bolstering young male egos in this way can backfire, fostering a degree of pride and arrogance, especially among the untested and insecure. (Faced with 30-something, baby priest-pastors who sweep into a healthy parish like a hurricane, obliterating every long-suffering DRE or school principal in their path, one is tempted to confront them: “I studied John Paul II, Father, and you are no John Paul II.”)

Mistrust is also at the root of the new and virulent clericalism. Some bishops are convinced that laypeople have become soft, gone over to the dark side, abandoned the faith. There is more than a grain of truth to this diagnosis, perhaps, but the pastoral response has too often been colored by fear and threat rather than by confidence and hope.

Circling the wagons against a hostile world and a laity that cannot be counted on, these enclave priests protect their own, no matter the cost. The non-ordained are once again relegated to coach class.

But this cannot be suffered. Roman Catholicism is a church, not a sect. No head can exist without its body. The faithful are not branches to be pruned but the root that gives life to the great oak.

The recently beatified 19th-century English Cardinal John Henry Newman was right when he said that the clergy—the “1 percent”—would look pretty foolish without the laity—the “99 percent.” And the American Catholic laity is perhaps the most educated and gifted in the history of the church. Clericalism wastes that precious and desperately needed resource.

Happily, the Catholic Church is big enough for sinners of all stripes, ordained and non-ordained. Blessed Pope John XXIII reminded us of this perennial truth when he wisely called for a suspension of excommunications and a renewal of collegiality and affirmation across “ranks” that had become too rigid and stultifying.

Let us pray fervently for a renewal of the church in this spirit of catholic collegiality, and for the recovery of the genuinely apostolic priesthood that must surely help inspire and accompany such a renewal.

R. Scott Appleby is a professor of history at the University of Notre Dame and the director of the university’s Kroc Institute for International Peace Studies.