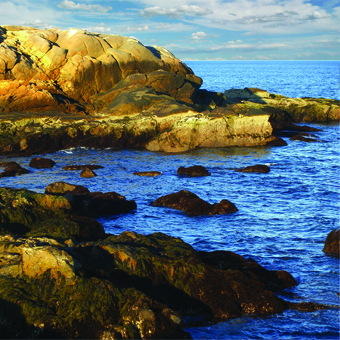 The most common question about my retreat is also the simplest: What exactly do you do?

All you have to do is show up—and shut up,” said the Jesuit priest, drawing a final chuckle from a group of 40 people settling down for a week of silent retreat. God would do the rest, we were all promised; we had done our part by getting there.

Though weekend retreats have been part of my spiritual practice since high school, I was a little skeptical that my first extended retreat was going to give me what I was looking for. Having struggled for years to understand “God’s plan” for my life, I was hoping for some clarity—if there was any to be had—so I had a lot riding on these eight days. I showed up. Would God?

Six days later I had my answer: “You have chosen the better part, and it will not be taken from you,” I wrote in my journal, a paraphrase of Jesus’ words to Martha from the Gospel of Luke. I set down the pen with a bit of shock: I had always been on the right path, a truth I knew with a certainty I’d never had before.

What happened between Day 1 and Day 7? An extended retreat can be different things for different people—they are, in fact, as unique as the people who make them. The eight-day model is an adaptation of the Spiritual Exercises of St. Ignatius of Loyola, the founder of the Society of Jesus.

His full “program” runs for 30 days, with each week carrying a different theme: God’s boundless love, along with our failure to accept it; the life and ministry of Jesus; his passion and death; the resurrection and our new life within it. Ignatius quickly realized that not everyone had 30 days to devote to prayer, so he adapted his method to shorter periods.

Most eight-day retreats take place at a retreat house, where many gather at the same time. Some locations are “naturally” conducive to prayer: My favorite is a converted mansion perched on the rocky Massachusetts coast, with the crashing waves of the North Atlantic serving as a metaphor for the inner adventure that a retreat can be. Extended retreats generally include daily meetings with a spiritual director, but apart from a daily celebration of Eucharist, the rest of the time is spent alone with God.

Of all the questions I get about my retreat, the most common is also the simplest: What exactly do you do? Even though Ignatius calls his directions “exercises,” it’s not like sitting down with a workbook. A retreat is a time of prayer, obviously, but the shape of the prayer is up to the individual. Some people take long walks, while others sit in silence before the Blessed Sacrament or a favorite icon. Others recite the psalms or meditate on scriptures suggested by their spiritual directors. Paint, crayons, and colored pencils get a lot of use as well. Silence is universal—indeed it is expected in the house and on the grounds—as is a commitment to several extended periods of prayer each day.

What’s going on “inside” is no less unique. Knowing how personal my own prayer has been, I expect that God comes to everyone else in a way particularly suited to them. Certain themes stand out, though: God’s unconditional delight in each of us; God’s healing touch and quickness to forgive; a surprising, unlooked-for insight; a deep sense of peacefulness or certainty when a decision becomes clear.

That’s not to say that there aren’t rough times on retreat. With so much time alone, there is ample opportunity to focus on personal failures, to get caught up in guilt or even self-pity. A good spiritual director is one who helps distinguish the presence of God from these temptations. Peace, trust, hope, and humor—especially humor—are God’s call signs; feelings of unworthiness or shame are dead ends.

The experience of discerning the difference between the two can be a challenge—one fellow retreatant confided that he felt like he’d been through a washing machine. For this reason, most retreat houses ask that retreatants have some experience with silent prayer, shorter retreats, and spiritual direction before making a longer retreat.

Yet the insights are worth the effort. I’ve learned that I am not in control of much. Thankfully not everything depends on me; God has things well in hand. Some moments elicit a chuckle: Not only am I not perfect, I learned to my chagrin, it’s not possible for me to make myself that way, nor is it even desirable. My foibles are every bit God’s gifts to me as the things I call my strengths. Other times of prayer bring awe and wonder, even tears, as when a favorite childhood story suddenly came to mind in prayer, and I realized that God had been speaking to me through it from the beginning.

That has been for me, perhaps, the greatest insight that has spanned my retreats: All along I thought I was seeking God, but it has always been the other way around. All I have to do is show up.