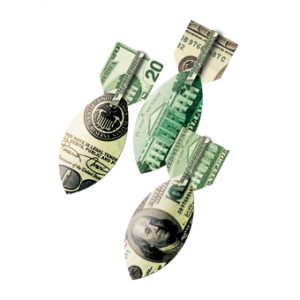 A trillion-dollar price tag isn’t the only cost of war.

While most of the Country’s attention is fixed on how best to commemorate the 10th anniversary of the September 11 attacks, the nation recently reached another milestone related to that event. Total military spending on Iraq and Afghanistan passed the $1 trillion mark at the end of April this year, and it is currently racing toward $1.5 trillion.

Most of that money was raised by selling debt, which over time will compound that figure. Economists predict the War on Terror will ultimately cost the nation a staggering $3.7 trillion. The economic debacle of the last few years has made it all too clear how many ways that vast amount of national wealth could have been better spent, particularly as increasingly desperate budget crunching has turned us against ourselves in the nastiest manner imaginable.

The invasion of Iraq did far more than divert the nation’s attention from running down the culprits of the September 11 attacks. It proved a pit for both the nation’s resources and its credibility.

The decision to pacify and modernize Afghanistan opened a strategic quagmire for the United States and NATO. Large-scale combat missions in Afghanistan will end, according to the president, by 2014. I wish I could say that whatever hard-won “success” is achieved in Afghanistan will prove enduring, but I have a sickening suspicion that the corrupt regime in Kabul and the flimsy infrastructure that has been so laboriously constructed over the past decade will not last many weeks after a U.S. withdrawal. But that may prove true whether the United States departs in 2014 or 2044.

I find myself thinking of the Athenians who, assured by the oracle at Delphi that a great empire would fall if they invaded Syracuse, felt emboldened to launch their great navy without first pondering which empire the oracle was referring to.

Al Qaeda’s $250,000 September 11 attack may prove to be the most cost-effective strike against a great power in history. It did not have to be so. Many strategic options were on the table in the aftermath of September 11, and they did not include the ill-conceived campaign against bin Laden’s secular Arab enemies in Iraq which has delivered the nation to this point almost 10 years later.

And yet we go about our lives listless and indifferent to the suffering of our own military families and the collateral damage inflicted around the world, stupefied and frozen before the nation’s debt-addled economy and the increasing inequity of our social order.

When will we account for the terrible tradeoffs we have made in order to pay for more war? Will anyone ever be made to pay for the cherry-picked and distorted intelligence that rushed the nation into the Iraq invasion in 2003?

Pope John Paul II, attempting to thwart the first Gulf War, implored President Bush the elder to turn away from the path of war, what he called the “adventure with no return,” and its ceaseless spiral of violence and mourning. How poignantly those words resonate today as we attempt to extricate ourselves from Iraq and Afghanistan where more than 6,000 U.S. servicemembers have died, together with an unknowable number of civilians.

His warning sadly resounds as we simultaneously seek a way ahead in our own troubled nation toward a renewed and shared understanding of a common good—and a way to pay for it all.­

Rarely have the just war principles seemed so pointed and true as when up against the decision to begin that “war of choice” in Iraq. Rising out of the ashes of the World Trade Center, we sought justice, and let’s face it, we sought revenge.

Now we emerge from the political and economic wreckage of our Middle East campaigns adrift and at war with ourselves. We may have remotely heard the Christian call to the imperative of peacemaking in the past. Perhaps now we have come to see the common good wisdom of it, too.