The editors ask Akbar Ahmed about the number of American women who convert to Islam and how they are treated in both cultures. 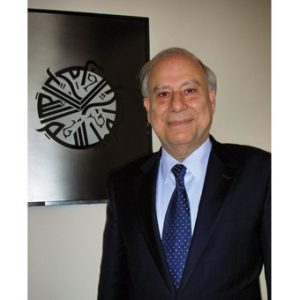 What do converts to Islam tell you about Islam in America?

Four out of five white converts to Islam are women, and they tell us a lot about how Muslims and non-Muslims see each other.

American women are the freest women in the world. When many Americans see a Muslim woman in a hijab (head scarf), they see the boundaries she’s putting around herself. Many Americans also have boundaries, but hers are more prominent. The hijab is a symbol of un-American dress and behavior. Why would a woman opt out of this freedom?

Nicole Queen is your classic case study. She was at the height of her career as a fashion photographer, standing next to Justin Timberlake, when she thought, “Life has got to be something more.” She’d go to these clubs and see women prepared to take their clothes off, have sex, and expose themselves to everybody just to be photographed.

A spiritual awakening forces someone to either look at Catholicism more deeply or Judaism or, in Nicole’s case, Islam. She felt that she needed these boundaries. Many Muslims worry that freedom has been taken to excess in the United States. Nicole is completely at ease with herself as an American. She has double pride as an American and a Texan.

Here’s a great ambassador between Islam and America, I thought, but then she told me about the abuse she received. People called her a “whore” for “selling out” Christianity. A lot of the Muslims asked if she was an FBI informant.

She’s very serene about it, though, and she has earned a lot of respect in the Muslim community. She has so much to give to Americans and to Muslims in trying to bridge this gap.

Is it fair to call the wild life that Nicole Queen rejected “American”? Isn’t that like calling honor killings or female genital mutilation “Muslim”?

In a sense, the lifestyle isn’t “American,” but at the same time it is because you can’t pretend it doesn’t exist. Likewise you can’t escape that honor killings and female circumcision are widespread practices in Muslim countries, though even Bernard Lewis, seen by many as a critic of Islam, says these are not Muslim practices.

My team of young people asked questions about American identity at Mardi Gras at 3 a.m. in New Orleans. Craig Considine, a Catholic boy from Boston, talked to this huge drunk guy on camera and this guy leaned across him and said, “You’re not Muslim, are you? Because if you were, I’d have kicked you in the nuts.” This is on camera. One girl said, “American? American means being f-ed up and being f-ed up again, having chicken wings and then being f-ed up again.”

All evening and all morning this went on. We hit a nerve. Something is going on in the underbelly. I can’t imagine any American family encouraging this, but this is happening. It’s not mainstream America, but it is part of society and we can’t pretend it doesn’t exist.

This is precisely where you get the organic link between a Nicole Queen saying, “We have crossed the boundaries,” and saying, “I want out. I want to do something else.” She could have become a Catholic or a Jew or a Muslim.

Perhaps she found Islam because it has not adjusted or compromised. Obviously there’s a theological reason—like St. Paul, a convert will suddenly see or hear God—but as an anthropologist I also look to society for clues.