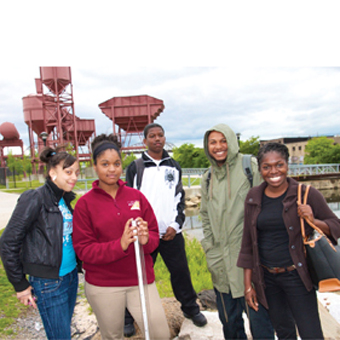 A group of young people in the Bronx finds that by beautifying an old eyesore, they’ve unleashed a desire to serve their community.

David Shuffler walks through the park that he helped build in the South Bronx on his way to work.

Grass and young trees line his path through Concrete Plant Park, named after the factory that was once on the site. Some of the old factory structures remain—but they’ve been transformed into public art.

On a sunny September afternoon, a young family sits in the grass, a boy casts a fishing line into the Bronx River below the promenade, and a few teens lounge in a reading circle, as Shuffler tours the park with part of his team from Youth Ministries for Peace and Justice (YMPJ). Two of the teen workers, Shanay Sneed and Andre Rivera, approach their peers in the reading circle to tell them about YMPJ, the force behind the park.

“My greatest joy is to see people using this park,” says Shuffler, director of YMPJ. “That’s a reward. The environment definitely transforms and connects people just because of its beauty and what it does for your soul, and I think we see it right here.”

Concrete Plant Park is the result of 10 years of learning, planning, and organizing by Shuffler and Bronx-area youth. YMPJ and many other organizations around the country are turning their attention to environmental justice, the concern that environmental issues—air and water pollution, lack of access to food or nature—disproportionately harm minority and low-income communities.

“The urban setting is just another place for us to explore environmental possibility and activities,” Shuffler says. “In communities of color, these things weren’t a tradition, weren’t a norm, [but now] we have seen these projects bubbling up all over the place.”

This work lines up with the Catholic approach to environmental concerns, which gives priority to the poor. “We’re using faith as the rationale of why we’re doing our work,” Shuffler says.

Shuffler was a founding member of YMPJ, which was started in the basement of his parish, St. Joan of Arc Church, in 1994. “My mom actually forced me to go to the program. I didn’t want to go to no silly summer camp,” he laughs, recalling that he thought he was a “grown man” at age 14.

Shuffler would work there after school and throughout college. He returned to the organization as executive director in 2010, after six years at the Association for Neighborhood and Housing Development on Wall Street, where at age 24 he was responsible for distributing $2 million a year in grants.

Like YMPJ’s founder, Alexie Torres-Fleming, he returned home to a neighborhood in decay. The South Bronx is the poorest congressional district in the country, the New York Daily News reported last fall. Thirty-eight percent of its residents—and 49 percent of its children—live in poverty.

YMPJ conducted a needs assessment survey in 1997, determining park space to be one of residents’ top concerns, along with education, employment, and policing.

In cities such as New York, there is often a disparity in park space per capita based on a neighborhood’s income level, says Andy Stone, director of the New York City Program for the Trust for Public Land. “There’s a lot of focus on environmental hazards in low-income neighborhoods, but the other [side] is the lack of access to nature and other environmental amen-ities,” Stone says.

Advocates are working to foster stronger connections between both the city and nature, and kids and nature. “Put it together with common sense, and inner-city kids are very disconnected [from] nature,” Stone says. Outdoor activity, meanwhile, helps children’s mental and physical development.

Still, Concrete Plant Park is the only access point to the river. “There was no access to the river at all—no legal invited access to the river—until we started doing our environmental justice work,” Shuffler says, noting the contrast to wealthier communities upstream where the river is a treasured natural resource.

In YMPJ’s offices Shuffler points to an old photograph of a banner hanging from an abandoned factory. “Replant the cement plant rally,” it announces. Shuffler grew up across the street. “This site used to be an eyesore—had 10,000 tires, had squatters who were living down here; people were dumping cars into the river,” he says.

The youth organized public demonstrations and worked with community groups and city council members to transform the space into a park, which opened in 2009. “It took us 10 years to really see the fruits of our labor,” Shuffler says. “We had to rely on our faith to get through some of those years.”

Working on the park also inspired the group to look into other environmental justice issues, including access to food, air pollution, and water conservation and pollution. Shuffler hopes to run more environmental programs out of the park. “This is a park, so hopefully it’s producing more oxygen for the world, but more so I hope it’s producing better stewards of the world,” he says.

Shanay Sneed, 19, works part-time at YMPJ while studying at City College of New York. One of her specialties is air quality issues. In front of the Jenna Concrete Corporation, she tells of a 22-year-old who died of an asthma attack in the Bronx River Housing Projects across the street. “We went into a couple of houses, and they had dust all over their furniture, dust all over the kitchen table, their couches. It was really disgusting,” she says.

A 2010 health study ranked the Bronx as the least healthy county in New York State. The New York Department of Health and Mental Hygiene reports that the economically disadvantaged neighborhood has nearly twice the asthma-related hospitalizations as the rest of the city, along with greater air pollution.

Ashwin Balakrishnan of the South Bronx River Watershed Alliance, housed in YMPJ’s offices, calls the neighborhood the “toxic triangle.” It is surrounded by three highways, and industry lines the riverfront, bringing heavy truck traffic and pollution.

The Sheridan Expressway, one side of the triangle, is 1.2 miles long, ending at the Bronx Zoo. The alliance is working to replace this highway with affordable housing and parks. The ultimate goal is to allow residents, including youth from poor families, to shape and enjoy their own neighborhood.

YMPJ doesn’t want to shut down industry, though. The youth have tried to talk to Jenna Concrete Corporation officials about being a better neighbor, Sneed says, and they are pushing for tighter regulations and greater oversight from the New York Department of Environmental Protection.

“It’s made me look at the environment in a different way,” Sneed says of the work’s effect on her. It has also made her a leader. “Because of the position that I’m in, I have to set an example for the younger ones and teach them about the work.”

Similar to Shuffler, 17-year-old Andre Rivera says he was forced to join the program. “Well, not forced, but I was having problems at school,” he says. On the roof of St. Joan of Arc, Shuffler defers to Rivera to explain how the rooftop garden insulates the church and prevents excess rainwater from overwhelming the sewer system, which overflows into the Bronx River.

Rivera then explains the flaws in the mayor’s plan to plant 1 million trees in New York. “Not only were the residents not informed, but when they installed the trees, they were not properly installed,” he says. “There was no space for roots to grow and spread out, so when YMPJ noticed that that was a problem, we went out and started doing tree replanting.”

“To have Andre at this age be able to talk about [these issues] and learn some hard skills, we see this as a green job opportunity as well,” Shuffler says. Rivera says he wants to continue the work he’s started, whether he goes into environmental science, engineering and construction, or policy. “You’re already a few steps ahead,” Shuffler says to him.

In the basement of the YMPJ’s offices—a house next to St. Joan of Arc—there’s a room reserved for reflection. Scenes from Jesus’ life put into the context of the Bronx decorate the walls.

“We’ll connect an issue in the community to one of the lines in the gospel,” Rivera says, giving an example from his environmental justice work. “God gives us the Bronx River so let’s utilize the Bronx River for what it’s meant to be. So like baptisms,” he says, pointing to the image of Jesus being baptized in the river. “That’s impossible in the Bronx River. It wouldn’t happen.”

Juan Carlos Ruiz served as YMPJ’s director of programs through 2010, and he is also a former priest. “We create spaces where they can talk about issues of faith and spirituality and how that relates to justice. . . . They come to see a spirituality that is not just out there but is more immanent, more personal, about a God who walks with them.”

While the program is faith-based, Sneed, who is not religious, says it welcomes all. “Our tone and spirit is what really drives this work,” Shuffler says.

St. Joan of Arc offered the organization free space when it started, and when Father Paul LeBlanc became pastor of the church, he wanted to maintain the relationship. “I know that the work that they do is good work, and I’m happy to support it,” he says.

LeBlanc also found funds for solar panels on the roof of the church. “I have an ecological consciousness and I want to do what is good for the planet,” he says, also noting the cost savings.

The church’s support, meanwhile, gives the organization credibility in the community. “The church is flexible in allowing us to be creative and hard-hitting. It allows us to make the gospel more real,” Shuffler says.

Concrete Plant Park also serves as a place to connect faith and the environment. The program has held reflections there. “Starting from that premise that the environment is a sacred place, it allows us to come and enjoy the space,” Shuffler says.

This becomes especially important, he says, when thinking about all of the concerns the community faces, whether due to pollution, hunger, or lack of education, jobs, or housing.

“There’s something about coming to the park and relaxing a little bit that allows you to fight even harder when you leave,” Shuffler says. “Yeah, there are a lot more pressing issues that will take a lot more time, but in order for us to be able to accomplish those, we need to create the space to stay well, to take care of ourselves for the long journey, and now we have a home. . . . We can come here.”

For Shuffler, Concrete Plant Park is also a symbol of YMPJ’s work. “The transformation of this site shows me that not only can we make transformation in physical places, but we can make transformations in our lives as well,” he says. “It’s just bricks and mortar, but [this is] what we do all the time in people’s lives.”