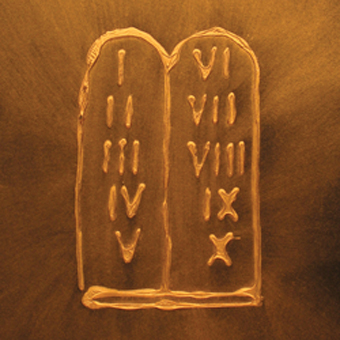 Are there different lists of the Ten Commandments?

So much is debated about the Bible that you’d hope when it comes to the Ten Commandments, at least, you’re on solid ground. There are 10, right? And they’re chiseled in stone—quite literally—so we know exactly what they are, number by number. Or do we?

Unfortunately it’s not that simple. A lot of issues attend the numbering of the commandments, not the least of which is that they appear twice in the Bible (in Exodus 20 and Deuteronomy 5), with small variations between the two, particularly regarding Sabbath observance. The second issue is that Moses doesn’t offer a numbering system when he pronounces this oracle in Exodus to the people at Sinai, nor when he reiterates it later in Deuteronomy when they are on the verge of entering the promised land. (If Moses had just prefaced each one with a Roman numeral or bullet-point, he could have saved us a lot of trouble!)

As it is, like other elements of scripture, the Decalogue numbering is more or less in the eye of the beholder. Where do you naturally put the line-breaks, and how do you distill long commentary surrounding the earlier commandments into a succinct phrase such as, “No false gods”?

Our own ancient bishops and early Jewish communities outside of the Holy Land begged to differ, however. Both groups chose to separate the prohibition against other gods (No. 1) from the one against image-making (therefore No. 2). That displaced the rest of the list by one number, down to the last commandment, which incorporated both forms of coveting. Most Protestant and Orthodox denominations continue to prefer this numbering, emphasizing “no image-making” as a stand-alone second commandment. Some fundamentalists polemically direct this commandment against the Catholic use of statues, icons, and stained-glass portraiture, accusing the Catholic Church of “removing” that commandment.

Rabbinic Judaism today, for its part, agrees with the church fathers on the numbering of No. 3 through No. 10. It defines the second commandment as contemporary Catholics and Protestants define their first, “Other Gods/images.” Rabbinic Jews hold a unique first commandment, from Deuteronomy 5:6, which describes the self-identification of God (“I am the Lord your God”) as its own command requiring human acknowledgment.

All three of these divisions and numbering were proposed in ancient Judaism, so none is technically wrong.