The land of Jesus’ birth may soon be without Christians to celebrate it.

At eventide the square of the Church of the Nativity in Bethlehem lights up like a Christmas scene. Brightly colored lights trail around the bell tower bathing Manger Square in a warm amber glow. Tourists lean on stones that have held up weary pilgrims for centuries. The low-tech light show washing over the square is unassuming and peaceful, just right for the spot tradition says the Prince of Peace entered human history in a most humble and vulnerable form.

Over the centuries the descendants of the first Christians have kept their faithful vigil over the sacred stones of the church in the Holy Land. How much longer they will keep that witness is no longer a rhetorical question, but a practical one, a major concern at the Vatican’s October Synod of Bishops for the Middle East. Bethlehem’s Christians once comprised as much as 80 percent of the community. Now they can claim just about 12 percent of the town’s total. It is a decline mirrored throughout Israel and the Holy Land.

According to the Catholic Near East Welfare Association, now only 50,000 Christians live in the Palestinian Territories. There are approximately 150,000 more in Israel.

Christians once comprised 30 percent of the population of Jerusalem. Today Christian Arabs are a mere 1.5 percent, and they say the only ones who remain are those too old or too poor to attempt a new life elsewhere. Even in the historically Christian quarter of East Jerusalem, the 24-hour sentry posts, barbed wire, and the Star of David rises on the rooftops of scattered Jewish settlers’ housing.

Israeli policies discourage the “natural expansion” of Christian families and communities. It is difficult for Christians (and likewise Muslim Arabs) living under Israeli jurisdiction to receive permits for home building, ownership, or expansion. Christian churches, schools, and other institutions similarly face a range of structural and unspoken obstacles to future growth even as illegal Jewish settlements are subsidized by an array of government policies—and ultimately U.S. tax dollars.

Within Israeli society walls rise against the opportunity and advancement of Christian Arabs even as actual walls break up their communities and harass transit in the West Bank. Top leadership within the Israeli government itself has become nakedly hostile to Israel’s minority citizens and communities under its technical jurisdiction in the West Bank.

Frustrated and increasingly desperate, Christian Arabs have more than a few reasons to want to escape from the Holy Land; they also have opportunity to do so. Unlike their Muslim neighbors, Christian Arabs in general have more family wealth and enjoy higher levels of education. They are welcome immigrants in Europe and North America where they have family connections and where Christian Arab communities have established significant roots.

“We are between the anvil and the hammer,” say Christians in the Holy Land, a fundamentalist Islam rising on one side and the illegal settlement of the occupied territories on the other. Arab Christians behold with bewilderment Christian tourists who alight upon Christian sites without encountering the Holy Land’s Christians. How is it, they ask, that fellow Christians can be so ignorant or dismissive of their plight?

The loss of the Holy Land’s Christians is more than a spiritual problem for the Middle East. It presents some real-world dilemmas for Israelis and Muslim Arabs to grapple with. What does this minority group’s unwillingness to stay say about the state of civil rights and democracy in the state of Israel? How does the loss of its Christians affect the future viability of the presumed Palestinian state?

Christians in the Holy Land play an important role in mediating some of the sharp edges of this historical conflict, offering an oasis of dialogue where Jews and Muslims can meet. It will be both a spiritual and geopolitical tragedy indeed, if this little light cannot continue to illumine a path to peace in the Holy Land. 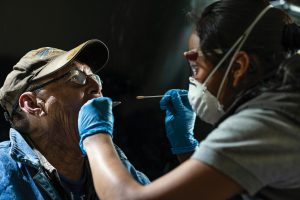 If we don’t beat COVID-19 everywhere, we can’t beat it anywhere