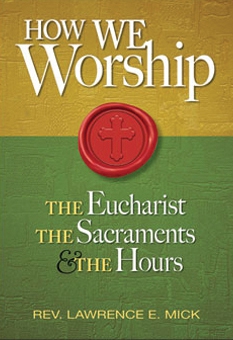 Sometime in the near future—the expected date is Advent 2011—English-speaking Catholics will have their liturgical world rocked by a new translation of the Mass. Preparations for this event are being made at many levels.

Every group of bishops, liturgists, academics, pastors, musicians, and publishers has discussed the change from every angle, and every possible opinion has been expressed and continues to be expressed. But everyone agrees on one thing: This is a not-to-be-missed opportunity to teach and to learn about the liturgy.

Father Lawrence Mick has provided a great resource for just this purpose. His accessible book walks the reader through the structure of the liturgy, focusing mainly on the Mass but acknowledging that liturgical prayer includes the celebration of all the sacraments and the liturgy of the hours.

Mick does a good job with the expected task of explaining the parts of the Mass, but he also provides a multidimensional look at the nature of ritual prayer and of the church that lives by it. By the end of part one, “Gathering God’s People,” for example, the reader has encountered the tension between American individualism and Christian community and has received a basic foundation in ecclesiology, as well as a look at the roles of music and architecture in liturgical prayer.

At the end of each chapter, Mick provides a look at the issue under discussion through the eyes of a catechumen and an elderly, life-long Catholic. Through these fictional characters, he explains change in the liturgy with appreciation for the present and respect for the past.

The book is for the general Catholic reader, and the questions for reflection and discussion at the end of each chapter make this a useful tool for parish study groups. Helpful resource lists offer further reading for the parish liturgy commission and the professional liturgist.