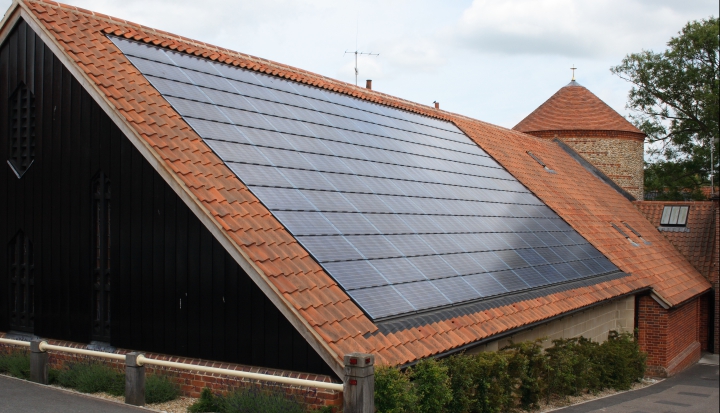 Reducing our collective carbon footprint can be as easy as plugging in.

In the old days all the cool guys and gals who wanted to show up “the man” devoted a lot of their creative geekiness to figuring out ways to get “off the grid,” devising Rube Goldberg-ish mechanicals and homemade micro-tech geared to living outside the nation’s energy infrastructure. It was laudable self-reliance—sometimes run amok—but it belongs to another age.

These days the best way to get back at “the man” (who is that guy anyway?) is to get back on the grid. Microgeneration or cogeneration projects are sprouting around the country, recently fertilized by the Obama administration’s stimulus package.

The idea behind this innovation harkens back to E. F. Schumacher’s “small is beautiful” approach to energy resourcing and conservation. The old model of energy production is based on the notion of massive, centralized energy creation sites, large and expensive nuclear, hydro, natural gas or coal-powered plants, that are then wired to a vast grid network that might deliver energy hundreds of miles away.

Such a large-scale approach is costly and intrusive and creates irresistible opportunities for government and corporate malfeasance, corruption, and plain old incompetence. It also creates a delivery system that by some estimates wastes as much as 10 percent of the energy it produces in transfer and bottleneck losses.

Many of the nation’s 10,000 energy facilities are old and inefficient producers of energy, some maxing out at no more than 33 percent efficiency. The 5,600 small-scale “distributed generation” sites around the country tend to be better users of their fuel sources, running at 65 to 90 percent efficiency.

The small-is-beautiful approach maintains the grid but rejects the large-scale production site in favor of hundreds of micro-sites: Not a chicken in every pot, but a solar or wind microgenerator on every rooftop creating, during peak performance, enough energy to power a home and perhaps return a trickle of energy back to the grid where it can be distributed to other energy consumers.

Sound too good to be true? It’s already happening. Cogeneration systems in the U.S. commercial and industrial sectors already are producing 135 billion kilowatt-hours for their own use. That’s approximately 3.6 percent of U.S. generation. In Europe the distributive generation grid has been progressing in Germany for 10 years, and the United Kingdom is moving ahead with a national plan of micro-production which has the support of 71 percent of households surveyed.

China is, of course, gearing its industrial machinery to produce the hardware and technology that will power the future in a distributive grid. One of the world’s most famous microgeneration projects is Vatican City, where solar panels are growing like ivy across venerable rooftops, and Pope Benedict XVI himself has applauded the Vatican’s goal to become the world’s first carbon neutral state.

The small-production method has obvious cost benefits, but it also reflects a practical path to sustainable energy production and promises significant reductions in climate-change gases. Certainly not least of all, the site-based distributive model protects individual energy users from massive outages that have occasionally and catastrophically darkened regional power networks. Just think of it as subsidiarity electrified.

The United States has not made as much progress as Europe in building a distributive-grid model for residential needs, but that could be changing. In Illinois Commonwealth Edison has begun an experimental program that plans micro-solar power plants on the homes of 100 local energy consumers in Chicago’s northwest suburbs. “We want to see whether consumers have the ability, with this technology, to become little utilities. They will be able to buy and sell electricity at a real-time hourly price, which is very close to the wholesale price, from their homes,” said Val Jensen, ComEd’s vice president for marketing and environmental programs, in a Chicago Sun-Times story.

Of course you don’t need a big old utility like ComEd to come in and install your powerplant. Let’s not forget that liberating do-it-yourselfism that powered the first generation of micro-energy producers. Get your own solar or wind system going, and get on the grid. It will do your wallet and our communal future a small but beautiful service.­