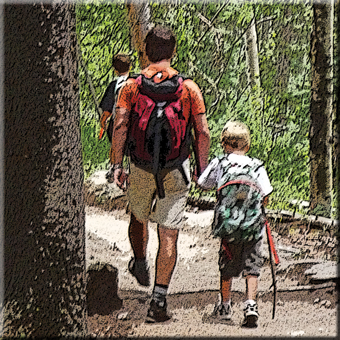 Falls and fresh air can teach kids the most important lessons of faith and life.

If you want peace, cultivate creation," Pope Benedict XVI said in his 2010 World Day of Peace reflection, arguably a message not just for the new year but for the new decade. With one sentence Benedict adroitly tied together a gang of the major preoccupations of Catholic social teaching with Pope Paul VI's radical 1972 admonishment: "If you want peace, work for justice."

Peace is not merely a cultural goal of human longing and endeavor but an integral part of creative unity, respecting and securing human dignity indivisible from esteeming and protecting the gift of the natural world.

How do we cultivate creation? We could start by being better stewards of that part of creation we are most powerfully connected to: our children. A study from Britain reports that kids there have enjoyed a declining rate of childhood injury. You know, the scuffs and cuts and breaks from falls from trees and crashed bikes and climbing things they shouldn't have been.

That would be welcome news if it represented an epidemic of more graceful children or proactive parents on the lookout for childhood hazards. Unfortunately the diminishing rates of traditional childhood injuries have more to do with the what and how of child's play than with more careful attention to it.

Consider the injuries that are on the rise among Britain's kids: Serious repetitive strain injuries suffered "after spending hours glued to [game] consoles" are up 60 percent since 2002. Tree climbing injuries dropped off by 50 percent over the same timeframe, and injuries caused by skateboarding, in-line skating, and skiing have fallen even further. A sociologist commenting on the study called the sudden fall in traditional growing-up accidents "bad news for childhood."

"The digital bedroom culture is growing all the time at the expense of the outdoors," the University of Kent's Frank Furedi said. "Doing physically challenging outdoor activities teaches children how to deal with risk-and they learn about their own strengths and weaknesses."

But that's not all they learn. Are our children learning to appreciate our natural environment from direct personal experience in the actual world or from their last 3-D viewing of Avatar or e-walking a Wii nature trail?

Father Thomas Berry, C.P. taught us that awe can be healing and that nurturing our sense of wonder and enchantment is a spiritual essential. But those spiritual lessons can't be learned indoors, and the generation coming of age around us may not learn them at all without our determined intervention.

The potential loss from such a diminishment transcends the individual and threatens what's left of the whole of creation in this, the earth's sixth period of mass extinction and the only one driven by human indifference.

This doesn't mean that we have to embrace our inner Grizzly Adams in order to raise children who are properly attuned to the natural world. At least I certainly hope not. Many adjectives come to mind to describe your humble scribe, but "outdoorsy" is not one of them. But that doesn't mean I have to retreat completely indoors either.

I find hiking a great way to spend a Saturday afternoon with my four kids. It gets them away from the media room and me from incessant petitions for yet another viewing of whatever Pixar release is currently in heavy rotation. I'm learning to appreciate the calm and beauty of nature and enjoying time with my kids, but I hope they are finding joy and sustenance a little bit themselves in the natural beauty around them.

I'm hoping that childhood wonder and awe matures into an adult aesthetic and attentiveness, so when it is their turn to accept the stewardship each of us is called to-and to select and support leaders who shoulder our collective stewardship-they will be ready for that responsibility, having taken their first steps with lessons about nature that even the most sophisticated modern media simply can't teach.­