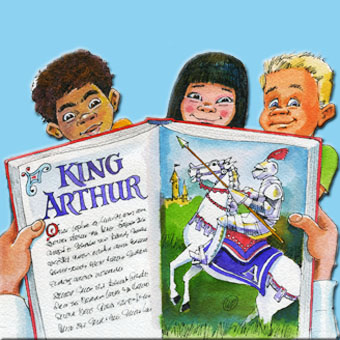 From nursery rhymes to fantasy anthologies, fill your shelves with stories to raise your children by.

Several years ago I stood in a long line at the airport behind a mother and her kindergartener as we inched toward security. I was headed to Boston to meet with my editor about a book I was writing, and I was beginning to nurture a seed of doubt in my premise-that sharing stories with children provides an important opening for parents and teachers to offer character education and share the faith.

A woman walked by and captured the attention of everyone in line. She was dressed in a plain black business suit, yet she was far from ordinary. Her face, marred beyond human likeness, was astonishing, shocking. Horror gave way to pity as we alternately gaped and turned away. No one said a word except the little girl standing in front of me who suddenly pointed and cried out, "Look, Mommy! Isn't that lady ugly?"

Something truly remarkable happened next. Rather than remain paralyzed by embarrassment, the mother quietly accepted the opportunity of a teachable moment and knelt down in front of her outspoken child. "Do you remember that book we read last week, The Rough-Face Girl?" she asked her.

"Well, why was the girl so unhappy?"

"Because her sisters made fun of her burnt-up face."

"How did she feel when people pointed out her scars?" the mom continued.

"Well, how do you think that lady feels when people remind her of her scars?"

"It probably hurts her feelings."

"Yes, I think it probably does."

And with a hug, this mom completed her lesson with her bright little daughter and delivered a moment of grace to the only person in line who could hear their hushed conversation: me. I no longer doubted what I know to be true-that story provides the best and most accessible means of teaching children about faith and values, and that the best way to share stories with kids is to read to them.

The Rough-Face Girl (Putnam, 1992), written by Rafe Martin and illustrated by David Shannon, is the re-telling of an Algonquin tale in which a girl's face and arms are scarred and disfigured from tending the fire. Like Cinderella, the girl is ridiculed and tormented by her two mean sisters until she finds love and healing in a happy ending.

The airport mom used the story to teach her daughter about empathy and kindness, but this same story contains themes of hope, perseverance, and justice, and offers captivating images of Native American culture along the shores of Lake Ontario. Like many stories available to today's families, it is a treasure trove of conversation-starters brimming with seeds of the gospel.

More than a good story

St. Justin Martyr, a second-century Christian thinker, wrote that each of us holds a gift for perceiving glimmers of truth because we are creatures of God, the source of truth. Every little bit of truth we recognize in our daily lives is a "seed" of the gospel. Justin cultivated the seeds he found in Greek philosophy; in the same way, we can unearth them in stories that we read with children.

Fortunately, many well-written stories with memorable characters and meaningful messages are readily available. Take, for example, one of the best-selling children's books of all-time: E. B. White's 1952 classic, Charlotte's Web (HarperCollins). On the surface, it is a delightful barnyard story about a pig named Wilbur, the runt of the litter who is rescued from the meat platter by Fern, the farmer's daughter, and later befriended by Charlotte, an amazing spider who speaks to him in his darkest hour.

Scratch below the surface and seeds of the gospel are plentiful here. There's Fern's valor in defending the life of the most vulnerable in her midst. There's also Charlotte, who consoles Wilbur and invites him to discover joy. "I sure wish I had a friend like Charlotte," an adult might say to launch an interesting talk about friendship and the child's current buddies.

A more recent literary example is Savvy by Ingrid Law (Walden Media, 2008), a 2009 Newbery Honor book. Although many current award-winning titles have received more attention, this one is rich in language and meaning, yet not as dark in tone as some. Centered around a girl named Mibs who comes from a family with special talents, it's a fun read-aloud choice with vocabulary that almost sings.

Mibs, along with some memorable supporting characters, sets out to save her father and comes to discover that everyone she encounters has special gifts, although some never recognize them. The story opens a door to many conversations, including where our gifts and talents come from and how we can find out how God wants us to use them.

Although Charlotte's Web and Savvy suggest a dark side of life, many children's titles these days wade deep into the darkness. The 2009 winner of the John Newbery Medal for excellence in children's literature, The Graveyard Book by Neil Gaiman and Dave McKean (HarperCollins, 2008), begins, "There was a hand in the darkness, and it held a knife."

Inspired by Rudyard Kipling's 1894 classic, The Jungle Book (Puffin Classics, 2009 edition), about a boy raised by wolves and the moral lessons he learns from animals lurking in the Indian jungle, Gaiman presents a boy whose family is assassinated by the blade featured in the book's opening line. Ghosts in a nearby graveyard, like Mowgli's wolves, adopt the child and provide a safe, albeit creepy, home for him. The big surprise is that this clever, well-written book carries a life-affirming message of love.

Several current series of books dip into the darkness as well. Rick Riordan's hit series Percy Jackson and the Olympians (Disney Hyperion, 2009), soon to become a movie series, introduces trouble caused when the gods of Greek mythology mess with the modern world. Trenton Lee Stewart's popular series about The Mysterious Benedict Society (Little, Brown, 2007-2009) features kids working to outsmart an evil criminal mastermind bent on taking over the world. And what could be darker than the world of vampires and werewolves depicted in Stephenie Meyer's wildly popular Twilight series (Little, Brown, 2005-2008)?

For me, the answer is probably Lemony Snicket's Series of Unfortunate Events (HarperCollins, 1999-2007). While Twilight is a story of enduring love, Lemony Snicket remains relentlessly depressing throughout all 13 volumes. Of course, that is the point, and a lot of readers enjoy that, but with so many choices available that offer hopeful messages, it seems unfortunate to pass along a story steeped in cynicism.

The majority of current series, Lemony Snicket's included, owe some of their success to J. K. Rowling, whose record-breaking Harry Potter series (Scholastic, 1997-2007) invigorated the publishing industry and helped kids learn or remember the joy of reading. Harry still has his critics, but his exciting story offers many seeds of the gospel and gives adults and children numerous topics to discuss.

While Harry Potter can be dark, evil has long been included in stories for children. Snow White features a witch who tries to poison her; Rapunzel's witch-mom locks her in a tower; and poor Hansel and Gretel's father and stepmother leave them in the woods, where a wicked witch enslaves and plans to eat them.

While violence in books is not received in a rapid-fire television way, written accounts of real-world violence can be terribly disturbing to kids. In sixth grade, my youngest son was required to read They Poured Fire on Us from the Sky: The True Story of Three Lost Boys from Sudan (PublicAffairs, 2005), a harrowing account that left him with nightmares. It was too real and raw for him to process.

Fiction, on the other hand, provides a safe distance from which we can examine evil. Fiction carries us away from reality to a fresh perspective, where we can examine problems, personalities, and situations in safety and privacy. Once we've sorted out our feelings and ideas, even those provoked by violence within a story, we can begin to interpret them and work toward some understanding.

Kids are ready to listen to stories from the moment they arrive in our lives. Even better news is that kids will continue to listen to stories for as long as we'll read to them. My oldest, now a dean's list college student, suffered a mild case of senioritis toward the end of high school. Typically an avid reader, he lay on his bed with an unopened green leather book by his side. "What's that? Homework?" I asked.

"Mallory?" I swooned. "Excalibur? The Sangreal? Knights of the Round Table? You love that sort of thing."

"Scooch over. And thank God it isn't chemistry or trig. This I can help with."

Time halted and then surged in reverse as we revisited our younger days on our way into Camelot. Soon we were worlds away, relaxing over a wonderful story. Much of our relationship had developed there, side by side over years of story time. It was a comfortable place we both remembered fondly, a place of refreshment where mind and spirit come together for a true experience of the divine. As the sign said above the library door in ancient Thebes, a place with books is truly a "Healing Place of the Soul."

Mary Margaret Keaton is a writer in Matthews, North Carolina and author of Imagining Faith with Kids: Unearthing Seeds of the Gospel in Children's Stories from Peter Rabbit to Harry Potter (Pauline Books and Media, 2005, pauline.org)