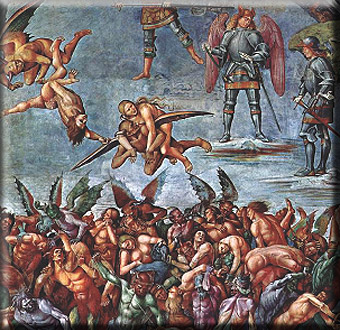 The Catholics in an often-repeated popular joke are always surprised that they have company in heaven, but according to a recent Pew Forum survey most would be much more surprised if they were the only ones there. In 2008 Pew reported that 84 percent of Catholics surveyed believed that “many religions” can lead to salvation (the highest of all Christian denominations), and nearly 9 out of 10 of those specifically cited at least one non-Christian religion capable of doing so.

“The more the merrier!” Catholics seem to be saying, and the respondents of this month’s U.S. Catholic Reader Survey on the afterlife tend to agree. Lenore Fries of Albert Lea, Minnesota doesn’t dance around the issue: “I think it is easier to get into heaven than we have been led to believe.” But this shouldn’t be any big news. A similar U.S. Catholic survey conducted in 1983 found that already a quarter-century ago respondents believed St. Peter had an open-door policy as the Pearly Gates-keeper.

Maybe Catholics are so Welcoming because heaven is the only spiritual destination that nearly all respondents can agree exists. While 99 percent of 2009 respondents believe in heaven, only 82 percent professed a belief in hell. Purgatory received a C on the heavenly grading scale with a 73 percent approval rating, and the idea of limbo, the now virtually abandoned eternal playground of unbaptized babies and virtuous “heathens,” has been given up by all but one in six respondents.

From San Angelo, Texas one respondent breathed a sigh of relief about how Catholics have finally let limbo go: “Thank goodness we no longer teach that unbaptized babies go to limbo—what a heartbreaker it must have been for parents to lose a child and think that the child had no chance to get to heaven!”

While there aren’t any huge differences between these results and those of the 1983 survey, a close look at the numbers shows that Catholics are slightly gravitating even more toward clemency and inclusion: Respondents’ belief in heaven and purgatory combined is up about 5 percent from 1983, and their belief in hell and limbo is down almost 8 percent.

Thirteen percent of 2009 respondents say they believe in reincarnation (up from 8 percent), but those who don’t believe in the possibility of a do-over also don’t seem terribly concerned that they have only one chance to get it right.

Respondents of both surveys were overall willing to give their souls some wiggle room. Twenty-five years ago 83 percent of respondents believed that “most people” go to heaven. Today 9 in 10 respondents do not necessarily agree that only Christians will be saved.

The general consensus of this month’s survey appears to be that an individual’s sincere attempt to live a good life is the most important criterion for earning a spot in the Book of Life. Catherine LeGault of Medford, Oregon cites her “determined effort to improve enough to deserve such a reward” as her ticket in, and many others also agreed that it is the effort that counts.

Therefore it is no surprise that 7 out of 10 respondents say they are more concerned about living a good life here on earth than they are about the afterlife. As Jamie Gunville of Green Bay, Wisconsin explains, “What we do here and now determines how we will spend eternity.” Jean Daly of Portland, Oregon is also sure that this life will take care of the next one: “I just have to do my best. God created me and knows all my human faults and failings better than I do.”

When the moment of fate arrives, four out of five survey respondents believe that they will have to personally account for the life they lived—but they place the burden of choosing a final destination on the individual souls themselves. While 36 percent don’t rule out the possibility that God would send a soul to hell, respondents across the board were quick to clarify that the distinction between God’s will and our own is very subtle.

“God doesn’t send them [to hell],” explains Evelyn Stateler of Santa Rosa, California. “They choose separation from God.” Lynn Haske of Santa Ana, California says, “I believe God allows us to turn our backs on him by giving us free will to sin. By doing so, we can send ourselves to hell.”

But even though “God has given me the possibility of rejecting him,” as a Sparta, Wisconsin respondent worries, most respondents believe that God’s mercy will ultimately prevail. “I do worry because I am not sure I am good enough, but I rely on the good and forgiving God to give me the gift of salvation at the end of my life here on earth,” writes a respondent from Independence, Iowa.

It may be that some people who do not expressly believe in purgatory also aren’t willing to give up the idea of a safety net, just in case. Peg Borkowski of Seattle is cautiously optimistic: “Prayer always helps—but I’m not sure about purgatory!” Prayer certainly can’t hurt, so perhaps respondents consider praying for those who may or may not be stuck in purgatory, if anything, a good spiritual exercise.

Twenty-six years ago many respondents gave concrete descriptions of what they believed heaven would be like—most involved nature somehow, and many had to do with favorite pastimes.

In the current survey, however, respondents are very reluctant to put any physical descriptions on heaven. Only one respondent describes what heaven might actually look like: Kalispell, Montana, with more sun, less fog, and better roads.

Instead, most respondents simply agree that heaven is full of light, peace, love, and happiness. But even that would not do for the many echoing Janet Roy of Winchester, Oregon. Roy doesn’t think any finite terms can suffice: “I believe it is beyond our human comprehension. What God has in store for us will be awesome.”

Richard Orth of Mesa, Arizona eloquently sums up respondents’ overall impressions of heaven: “An unimaginable euphoric state of knowing the full glory of God and communion with all who share his love.”

Those who responded to the 2009 survey are also not very particular about what they want in heaven with them. While 1983 respondents were eager to list things such as “chocolate” and “baseball,” 2009 respondents generally don’t hope for anything material—or at least they don’t admit it. The vast majority now answer with variations on the desires of either Joe Oliver of Prescott, Arizona (“all my loved ones”) or Ingrid Kelly of Studio City, California (“eternal joy in the presence of God”). Several respondents even included their pets.

Marilyn Clarke from Bonita, California speaks for another significant proportion of respondents when she says, “When I get to heaven, it will be so wonderful that I won’t want anything else.” Theresa Fredericks of Geneseo, Illinois chimes in that “being in the presence of God should do it!”

The afterlife is frequently on Catholics’ minds—about 90 percent of survey respondents “often” or “sometimes” think about what awaits them beyond the grave—but no one seems to be losing sleep over it. “I leave the worrying to God,” says Beth Cartwright of Pflugerville, Texas.

Though expressing doubts and fears, respondents of this survey overwhelmingly turn to their trust in God’s benevolence. “God’s mercy is beyond limits,” declares James McDonough of Austin, Texas, and another respondent from Omaha reaffirms that “God is all-loving and all-forgiving.”

Karen Woldum of Tulsa, Oklahoma sums up the overall feeling of survey respondents by saying, “I sometimes worry because death and eternity are uncertain to me, but I know that God will be with me through it all and forever.”

Sarah Sharp is a Claretian Volunteer who writes for U.S. Catholic magazine.