The preselection technology that will advance the future's construction of the perfect child already exists. Prefertilization genetic screening and prenatal testing have instituted a de facto "quality control" filter into the process of human reproduction, says Jeannie Hannemann, a family life minister and one of the founders of the Elizabeth Ministry, an international mentoring service for women during pregnancy.

In the past, Hannemann had to counsel only a small number of pregnant couples in her parish who were confronted with crisis pregnancies. Now "basically every pregnancy has become a crisis pregnancy."

In an effort to ward off malpractice suits or avoid the costs associated with the care of problem pregnancies, congenital illnesses, or special-needs children, obstetricians and HMOs are standardizing prenatal testing and genetic screening procedures previously reserved for couples with histories of problem pregnancies or congenital birth defects, she explains.

Hannemann is no fan of prenatal testing, arguing that these procedures
endanger fetuses, produce untrustworthy diagnostic results, and needlessly drive couples to panic and anxiety. But more important, according to Hannemann, prenatal screening procedures are often not conducted to cure a disease but to alert parents of a potential "special needs" infant.

What typically begins then is a process of cajoling and pressuring that terminates in an abortion, she says. "Science has gotten very far advanced on prenatal testing, but science has not gotten very far on being able to correct any conditions in the womb.

"We're not against prenatal testing if it's leading toward a treatment to correct a condition. But that's not where the society has moved. Now it's on these 'search-and-destroy' missions for any child that has any kind of disability so that they can be aborted."

Hannemann sees a culture shift taking place moving away from supporting families with special-needs children toward resenting such families for creating a "burden" on society. She has read pamphlets on "abortions for love," seen "wrongful life" lawsuits against physicians who delivered special-needs children, and heard of HMOs refusing treatment to special-needs children, arguing their mental or physical problem represented a "preexisting condition" because their parents elected not to abort them after prenatal screening indicated a problem.

Already eight out of 10 fetuses diagnosed with Down's syndrome are aborted, and unseemly pressure toward abortion is being applied to parents when their offspring are determined to carry any number of mild to severe congenital problems. What may be evolving is a process of social eugenics driven not by some Hitlerian racial fantasy but by a cultural disinclination to respond to special-needs children and by government to keep down the social costs of such children.

"The bottom line for Catholics is how much do we need to know before a baby is born? Why are you going to have these tests and risk your child when so little can be done?"

A reflection for the second Sunday of Lent 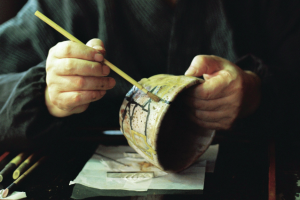 What Job and a Japanese pottery practice have in common