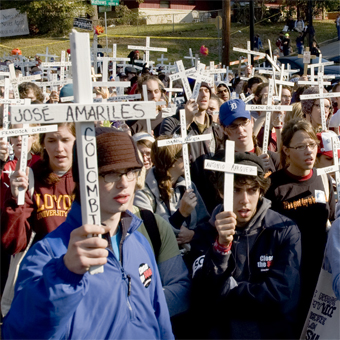 Catholic college students get schooled in peace and protest at the annual School of the Americas vigil.

"Close it down!" Patrick Eccles, a Loyola University Chicago chaplain, shouted to a group of 50 Loyola students about to embark on a trip to Columbus, Georgia to protest the U.S. Army School of the Americas (SOA). "Close it down," they replied weakly, seeming unsure of their voices, mission, and comrades.

Three days and 830 miles later, the students stood in a tight circle, arms around each other, waiting to return home. After praying together-for the victims of the SOA, for the efforts to close it, and for the community formed over the weekend-they repeated the call and response. "Close it down!" they yelled unabashedly this time, turning other protesters' heads.

The moment was spontaneous-"a positive way to keep people together" when the bus was late-says Rachel Hart, a chaplain and trip organizer. Yet after a transformative weekend that was part spiritual retreat, part social action, and part community building, it was an appropriate "sending forth."

"There was a community and a spirit of the group that didn't just end in Georgia," Hart says.

History class
Loyola's students were among more than 22,000 protesters gathered at the gates of Fort Benning, where the army school is located, last November, including about 2,000 students from Jesuit and other Catholic schools, parishes, and organizations attending the Ignatian Family Teach-In for Justice, held in conjunction with the vigil.

For young people, the events are not just a weekend away from campus; they are part of their education. They learn about justice issues, are inspired by their faith, and join a movement that is almost as old as they are.

Father Roy Bourgeois, the founder of SOA Watch (SOAW), and nine others first fasted at Fort Benning's gates in 1990 in response to the massacre of six Jesuit priests and two companions at the University of Central America in El Salvador on Nov. 16, 1989. A U.S. congressional task force revealed that most of the killers were trained at the SOA.

Activists say that the school has helped Latin American governments suppress, torture, and massacre the poor and their advocates, including Catholic leaders who promoted liberation theology. SOA training manuals released by the Pentagon in 1996 advocated torture and targeting civilians.

As news of the SOA spread, the movement grew from the Maryknoll priest and his fellow fasters to thousands undertaking acts of civil disobedience and lobbying the government. In December 2000 the SOA closed, but a month later the Western Hemisphere Institute for Security Cooperation (WHINSEC) opened in its stead.

According to the school's website, WHINSEC teaches military, law enforcement, and civilian leaders to strengthen democracy and protect human rights. The SOA "fulfilled its cold war-era mission," and WHINSEC addresses 21st-century security challenges, including border conflicts, drug trade and crime, natural disasters, and peacekeeping. While the school cannot guarantee its graduates won't commit crimes, its Board of Visitors, chaired in 2007 by Bishop Robert Morlino of Madison, Wisconsin, evaluates and approves its operations.

Still, SOAW says the change was merely "cosmetic" and it continues to protest the SOA, which has also come to stand for "School of Assassins."

"Blessed are the peacemakers," Bourgeois said at the teach-in. "For they shall never be unemployed."

The site of the protest and vigil, a fenced-off stretch of road leading up to Fort Benning's gates, resembles a fair, with food stands, vendors, and entertainment, with a social justice twist.

As the SOA protest has grown, diverse justice-related movements, Catholic and secular, have attached themselves to it. While proponents of every issue from fair trade to women's ordination have booths, anti-military protesters are the most common.

Displays and speakers connect the SOA to the U.S. military's use of torture in the war on terror. Young people, including some Loyola students, chanted "We don't want your (bleeping) war" during a spontaneous war protest.

Most of Loyola's group, however, avoided this protest. Shouting expletives is neither in the spirit of nonviolence nor effective, says senior Rachel Higgins.

Those who grew up in military families were particularly troubled by anti-military sentiments. During structured reflection time, some shared that they were yelled at by locals or had seen signs for "God Bless Fort Benning Day," held the same weekend as the protest, and could recall attending similar military family days as a child.

These students want both the local people and the anti-military protesters to distinguish between the SOA and Fort Benning-between bad policies and an honest, potentially positive (if used for peacekeeping) institution. "The problem isn't people in the army but the people making decisions," says junior Kelly Carlson, whose father is in the National Guard.

While students come to the protest with different backgrounds, "we wanted to be intentional about saying we are a Jesuit institution," Hart says. For this reason, the Ignatian Family Teach-In was central to Loyola's trip.

The teach-in, hosted by the Ignatian Solidarity Network, starts as the school groups arrive Friday evening; continues with speakers, song, and prayer on Saturday morning; and ends with a Mass on Saturday evening. The event is an opportunity for students to learn about the SOA, to discuss the justice issues that concern them, and to share inspirational ideas and stories. Loyola's Amna Shaikh, for instance, shared her perspectives as a Muslim working for justice as a student speaker.

Whether addressing Katrina, the Middle East, or the SOA, however, the common theme is faith. "None of us knows what to do," Sister Helen Prejean, C.S.J. told the students, who gave her a screaming standing ovation fit for a rock star. "That's why prayer is important. We don't want to act out of confusion."

Some said that speakers repeated what they knew from classes, but putting their knowledge into action "is the most important thing we're learning at a Jesuit institution," Laura Sienas told her reflection group after Mass. "Social justice is the church. This is the Catholic Church right here."

Or at least this is what it should be about, Sienas added. The students on the trip are proud of their Jesuit "faith that does justice" education, but for three years, Loyola's student government has voted against a resolution affirming the student body's support of the SOA protest.

After junior Mary McEvoy and others gathered more than 450 signatures of petition, however, the resolution was placed on a schoolwide ballot and the student body president came to the trip's send-off to apologize and thank the protesters for representing Loyola. Still, the initial rejection frustrated McEvoy, who picked Loyola for its commitment to justice.

At the teach-in, another student spoke on the rejection she faced at her own Jesuit school. Hearing this helped McEvoy. "Here we're in community. We're not alone," she says.

At no time is that community felt more powerfully than at the vigil Sunday morning. From the stage singers call out the names of victims of SOA trainees. After each name, the crowd lifts up white crosses with victims' names on them and responds, "presente," meaning the victim is here in spirit. The first time the 22,000-person procession sings out "presente" is a "wow moment," Higgins says.

Singing the litany of names takes about three hours, during which everyone walks in procession down the street and back to the gate, where they leave their crosses and other symbols of remembrance and pause to pray. McEvoy was moved to tears by the scene at the gates-an emotionally overwhelming scene for many. She worked with torture survivors at an advocacy center, so her cross came to represent "all the people I found myself helpless to protect, helpless to provide relief for." Having faith that the victims were at peace with God now, "that there was something beyond all of this," she says, comforted her.

Seniors Anne Poler, Carolyn Frey, and Larry Parr found support from 16 other college students from around the country, with whom they had spent the previous semester at Casa de la Solidaridad at the University of Central America, where the Jesuits were killed in 1989. There they learned about justice through both academic work and immersion experiences.

In El Salvador, Parr and another student stayed for a week with a family that lost five children before escaping to Honduras. Putting the children's names on their crosses at the SOA protest made the vigil, his fourth, more personal for Parr. "It was great to be there with the guy who I lived with, to be saying ‘presente' with him, and to be thinking of the same people who were so generous to us," he says.

As the bus rolled back toward Chicago Sunday night, Parr looked at brochures for the Maryknoll Lay Missioners, which would become his next step after graduation. Later he and others discussed how they could help low-income residents in gentrifying neighborhoods around Loyola's campus.

"Part of my role as a chaplain is facilitating the students' growth and leadership," says Hart. They learn "ways they can take their degree and put it to very amazing uses."

In the past year Loyola's SOA protesters have held and attended protests, lobbied the government to close WHINSEC, volunteered, and started new justice groups, including an intentional community at Loyola. They have traveled to Casa de la Solidaridad in El Salvador and to other academic and volunteer programs around the world, from Detroit to Uganda.

The Loyola students-along with the priests and nuns, hippies, grandmothers, babies, and all the other students at the vigil-may have failed to "close it down" last year, but protesting the SOA strengthened their voices as well as their sense of justice, faith, and community.