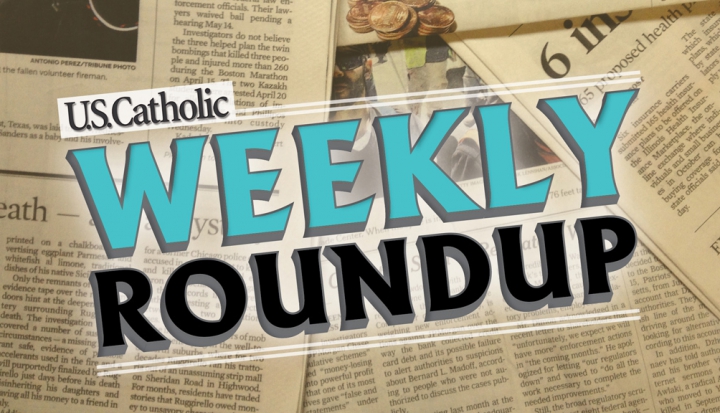 Well, it was yet another tough week. The temptation to bury my head in the sand was strong. So in case you spent the week doing Internet searches of baby goats to keep from weeping, this is your weekly roundup.

The situation in Ferguson, Missouri continued to ebb and flow this week. Protesters continued to gather each night, and the police presence continued to be antagonistic. Tear gas has been used repeatedly. The National Guard was called. A state of emergency was declared, and a curfew put in place.

The curfew has since been lifted, and Governor Jay Nixon has withdrawn the National Guard. Attorney General Eric Holder visited Ferguson, and met Michael Brown’s parents as well as Ron Johnson, the Ferguson Highway Patrol Captain.

Worth reading: Faith leaders signed a statement calling for justice in Ferguson. The endeavor started out as a collection of signatures among black clergy, but became an interfaith and interracial effort.

Forty-year-old journalist James Foley, who was captured in Syria in 2012, was beheaded this week, and a video of his murder was released by the extremist militant group ISIS. President Obama commented in strong language on the brutal execution.

Our prayers go with the Foley family as they grieve their loss.

Worth reading: ISIS had demanded a ransom of $123 million for his release. His death is bringing to light the debate surrounding the terrorist ransom economy.

The good news is that the two American mission workers who contracted Ebola when working in Africa have both been discharged from the hospital and are Ebola-free.

a picture you won't soon forget. dr kent brantly says good bye to the team that saved him. #ebola pic.twitter.com/L7j66SUm4q

The bad news, of course, is that the disease is still running rampant in Guinea, Sierra Leone, and Liberia, and it is hitting the countries’ already struggling economies.

Worth reading: Churches in African countries are working to find ways to prevent the spread of Ebola virus among their congregations.

And now for something completely different:

Russia is not too happy with the people in Bulgaria, because they keep vandalizing a particular Soviet memorial. From painting the figures to look like superheroes to dressing the figures in Ukrainian colors, the vandals seem to be having fun, though the Russians don’t like it much.

Well that's our roundup for the week. And because you made it all the way through, here's a very cute video of baby goats talking back.

Have a great weekend, and don't forget to take our survey about what difference it maks to know poor people.