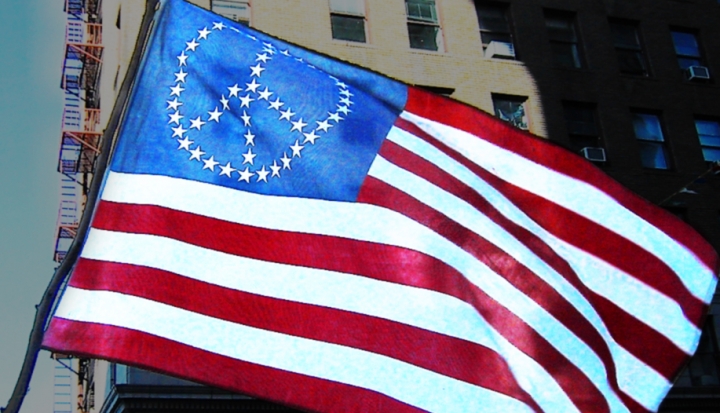 In 2007, facing the probability that the Iraq War was unjust, a group of Catholics in my community in Port Huron, Michigan, openly informed IRS that we would redirect hundreds of dollars from our federal taxes, donating this “Iraq Peace Bond” instead to our local library. Our donation was merely a drop in the bucket of the trillions wasted in this war, but a small step in a new direction. Most of the money was eventually recovered by IRS, but the donation still helps the community and serve as an inspiration to find further methods to invest in the works of peace, not war.

The spirit of the Fourth of July is one that celebrates our freedom, but it is one that often overlooks the violent revolution it took for us to achieve that independence. The Founding Fathers had something in common with all revolutionaries down through history—the belief that killing the oppressor would bring freedom. They were not saints. Nobody says so. They were pragmatic. They led us to the bloody birth of our nation, not to heaven. They believed in violence as the means to justice. Where in Jesus’ Good News do we hear that we need to kill the enemy in His Name to establish God’s kingdom—or any kingdom?

It’s time we Catholics fully embrace God’s call to love as God loves: unconditional, all-merciful, non-violent. But that can be a great challenge when we live in countries that have little respect for life, with economies that promote war. How does the Christian convert from this intricate, materialistic system that promises a heaven it can never deliver?

The problem for us in the United States is non-cooperation with evil–a difficult feat when so much of our tax money (more than 50 percent of all federal income tax, or 25 percent of total income tax) is spent on war. There are, however, alternative ways to turn away from it towards peacemaking. It is possible to take some of the money you would have offered to the troubled war economy and homeland security and spend it instead on the works of mercy, from feed the hungry to investing in creative work opportunities for our young people to  donating to your local Christian pregnancy care centers.

You must inform the IRS of your intentions, and your wish to be a responsible citizen while also divesting from this war economy. The dialogue that follows with them can be kept cordial. For the practical measures, contact the National War Tax Resistance Coordinating Committee. My wife and I have tried war tax resistance/redirection for 17 of the 35 years of our marriage, with varied results—some trial and tribulation, a lot of good done within our faith and larger communities.

This way of following Jesus is not an easy path. None of us is perfect; redirecting some of your income from federal taxes to works of charity and justice has pitfalls and IRS repercussions. But in our society money has become the message, and something must be done.

We must follow Jesus’ commandment, “Love one another as I have loved you.”  If through prayer and scripture we cannot see and hear Jesus wielding a machine gun mowing down the enemy, then we must begin to put away the swords.  There will always be a point in our lives when we must choose between God and country, God and money, God and our own personal temporal security. There will never be a country synonymous with God’s kingdom. Death is inevitable, there is no protection—except choosing God’s way of new life.

We struggle to be the peacemakers of the Beatitudes, sons and daughters of God, working and praying nonviolently. This is God’s revealed way, the true path to freedom. God bless America, with this grace, beginning this Fourth of July.

Michael McCarthy is a retired physician assistant from Port Huron, Michigan. He is a former organizer for Cesar Chavez's United Farm Workers union and has taught community college courses on faith and the politics of nuclear disarmament in Kentucky and Michigan.